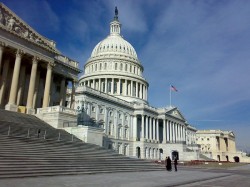 Does anyone need any additional evidence that our political system is completely broken?  The bipartisan congressional supercommittee that was given two months to come up with at least $1.2 trillion in deficit cuts over the next decade has failed to reach an agreement.  It is an epic failure and a national embarrassment.  The truth is that they never even came close to an agreement.  In fact, as you will read below, the two sides on the panel have been barely even talking to each other.  In the end, the supercommittee was a super joke.  Meanwhile, the U.S. national debt has passed the 15 trillion dollar mark and we are facing trillion dollar deficits as far as the eye can see.  We are heading directly for a national financial disaster, and our “leaders” seem powerless to do anything about it.

According to the supercommittee’s rules, any plan would have had to have been submitted to the Congressional Budget Office by Monday in order to give the CBO 48 hours to analyze how much the plan would reduce budget deficits over the coming decade.

When the supercommittee was announced, it made headlines all over the world, but now it is ending with a whimper.

The supercommittee was never a good idea in the first place, but you would have thought that they could have come up with something over the course of two months.

But instead all they are giving us are a whole bunch of excuses and a whole lot of hot air.

Is it really that difficult to come up with $1.2 trillion in cuts over a decade?

It isn’t as if they would even be cutting very deeply.  $1.2 trillion in cuts would not even cut the budget by $150 billion a year.  We would still be talking about trillion dollar deficits way into the future.

But instead of agreeing to some token cuts, they have chosen to do nothing and to blame each other.

So now $1.2 trillion in “automatic budget cuts” will go into effect starting in 2013.  But even that $1.2 trillion figure contains a lot of “fuzzy math”.  For example, it includes $169 billion in “projected savings” from “reduced interest costs” on the national debt.

I would love to see how they came up with that figure.

In any event, the truth is that none of these numbers really matter at all.

None of the budget cuts go into effect until after the 2012 election.  That means that this Congress can vote to repeal the automatic cuts well before then.

Some in Congress are already pushing for this.  For example, U.S. Senator John McCain said the following recently….

“It’s something we passed. We can reverse it.”

Or, even more likely, once the new president and the new Congress are elected in 2012 they will almost certainly choose to abandon this agreement.

When it comes to politics, the only thing that matters is what happens before the next election.

All of this talk of future cuts is just an illusion.  When the next president and the next Congress come to power, they will want to do their own thing.

So after all of the huffing and puffing over the last couple of years, what has actually been accomplished as far as reducing our horrific budget deficits?

Not much at all.

We racked up a $1.3 trillion budget deficit during the fiscal year that just ended, and this fiscal year we will be somewhere in the same neighborhood.

We have been living in the greatest debt bubble in the history of the world, and at some point all of this is going to end very, very badly.

The total amount of debt in this country (government, business and consumer) has been rising much, much faster than our national income has.  If you don’t believe this, just check out this chart.

In particular, government debt is totally out of control.  When Barack Obama first took office, the national debt was 10.6 trillion dollars.

It is now over 15 trillion dollars.

We are in debt up to our eyeballs and we desperately need our leaders to do something about it.

But according to a recent Politico article, the members of the supercommittee haven’t even been talking to each other….

The supercommittee last met Nov. 1 – three weeks ago! It was a public hearing featuring a history lesson, “Overview of Previous Debt Proposals,” with Alan Simpson, Erskine Bowles, Pete Domenici and Alice Rivlin. The last PRIVATE meeting was Oct. 26. You might as well stop reading right there: The 12 members (6 House, 6 Senate; 6 R, 6 D) were never going to strike a bargain, grand or otherwise, if they weren’t talking to each other. Yes, we get that real deal-making occurs in small groups. But there never WAS a functioning supercommittee: There was Republican posturing and Democratic posturing, with some side conversations across the aisle.

Could it really be true that they have not met since November 1st?

Is Congress really that much of a joke?

According to Real Clear Politics, the approval rating for Congress is sitting at about 12 percent right now.

After this, it may get even lower.

Instead of working on a solution to our problems, the members of the supercommittee have been busy going on television and telling us who to blame.

The following is a short exceprt from a recent article in the Washington Post….

Republicans on the supercommittee held a conference call Saturday morning, and aides said members from both parties continued to talk by phone. But neither side was predicting a last-minute breakthrough. Instead, seven panel members booked appearances on the Sunday talk shows, as both sides readied their best arguments for why the other is at fault.

Our politicians are obsessed with finding someone else to blame and with getting ready for the next election.

Meanwhile, the ship is going down and people are starting to panic.

And this is not going to look good to the rest of the world at all.  There is a very real risk that one of the other major credit rating agencies will decide to downgrade U.S. debt.

The second downgrade of debt is often more important than the first.  When the first downgrade happened, U.S. debt still had a AAA rating from the other two major credit rating agencies.

But after another downgrade, the average credit rating of U.S. debt will be less than AAA.  That will mean that U.S. debt will no longer be a cash proxy.  A lot of transactions that take place right now in the financial world would not be able to happen if that takes place.

So what do our leaders need to do?

Well, the truth is that we should recognize that they are in a really, really tough position.  Decades of nightmarish decisions have left us out of good options under our current financial system.

This is what I mean – if we don’t deal with our national debt now, everyone agrees that a massive day of reckoning is coming down the road.  Greece is an example of what happens when debt catches up with a nation.

However, if we did cut the federal budget very deeply right now, it would almost certainly bring on a huge economic contraction.

Right now, insane federal spending is one of the only things keeping this economy afloat.  If you were to suddenly pull half a trillion dollars (or more) of federal spending out of the economy, it would have a devastating impact.

A lot of people out there correctly argue for a huge reduction in federal spending, but they greatly underestimate the amount of pain that it would cause.

Our “real economy” is rapidly being gutted and America is becoming poorer as a nation every single day.  One way that we have been making up the difference is by going into almost unbelievable amounts of government debt.  When the government debt bubble pops, the pain is going to be enormous.

If you do not believe this right now, you will believe it soon enough.

Not that we should keep going into huge amounts of debt.

Every dollar that we “borrow” is actually being stolen from our children and our grandchildren.

In fact, that is what Thomas Jefferson believed.  According to Jefferson, when the federal government borrows money in one generation which must be paid back by future generations it is equivalent to stealing….

We have got to stop stealing from future generations.  If they get the chance, they will curse us for what we have done to them.

Anyone out there that supports our current system of running endless budget deficits is supporting a horrific crime against our children and our grandchildren.

But once again, we all need to clearly understand that when the borrowed money stops flowing out of Washington D.C., our economy is going to get much worse.

Are you prepared for the unemployment rate to double?

Are you prepared for foreclosures to soar to unprecedented heights?

Are you prepared for economic pain unlike anything you have ever seen before?

According to the New York Times, there are 100 million Americans that are either living in poverty or that are considered to be among the “near poor” right now.

So how bad will things get if we plunge into a depression?

Anyone that believes that we can drastically cut the federal budget and improve the economy at the same time under our current system is not being rational.

Just look at what is happening to Greece.  They implemented substantial budget cuts (although not nearly big enough to bring them to a balanced budget) and they have plunged into a nightmarish economic depression.

There is a way out of this, but our politicians are not talking about it.  As I have written about previously, if the federal government abolishes the Federal Reserve and starts issuing debt-free money, we could eliminate our federal budget deficits, cut taxes and improve the economy all at the same time.

But nobody is even talking about debt-free money.

Instead, all of our politicians are talking about “fixing” the current system.

Well, let me tell you, it is impossible to solve our problems under the current system.  If we insist on maintaining our current debt-based financial system, it will only end in a massive amount of pain.

The American people need to get educated about our financial system.  They need to learn that the Federal Reserve and the debt-based currency that they issue are at the very heart of our economic problems.

Back in 1913, prior to the passage of the Federal Reserve Act, the national debt was only about $2.9 billion.

Today, our national debt is over 5000 times larger.

Unfortunately, the American people don’t understand this, and there are virtually no politicians out there that are even talking about this.

Very dark days are ahead for America.

You had better get prepared.