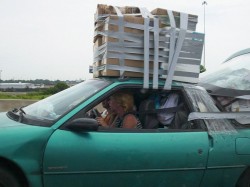 It has been said that the definition of insanity is doing the same thing over and over and expecting different results.  Unfortunately, millions of Americans find themselves slowly going insane as they apply for hundreds upon hundreds of jobs and yet never get hired.  It is incredibly difficult to get a good job in most areas of the United States today.  So if you are unemployed, and there are no jobs in your area, should you hire a long distance moving company and move somewhere else in an attempt to find work?  That is a very hard question.  Of course if what you are currently doing right now is not working it is only natural to want to change course, but sadly unemployment is absolutely rampant all over the United States.  Today, the “official” unemployment rate is hovering around 9 percent, but the true employment picture is much bleaker than that.  There are millions and millions of unemployed Americans that are so discouraged and have given up looking for a job for so long that the U.S. government does not even consider them “part of the labor force” any longer.  If they were included in the “official” figure, the true unemployment rate would be well into double figures.  In addition, there are millions upon millions of Americans that are working part-time jobs or very low paying jobs because that is all they can get.  Those millions of “underemployed” Americans would jump at the chance to get a “good job” if that opportunity was available. Low income jobs now make up 41% of all the jobs in the United States.  So there are a lot of people that have a job that really wish that they were making a lot more money.  Because of the lack of good jobs, millions of American families have been pushed to the edge of economic desperation and millions of American families are drowning in debt.  So what do you do if there are no good jobs in your area?  Do you sit tight or do move to a new location hoping for something better?

On the negative side, it can be extremely expensive to move.  Not only will you have moving expenses, but you will also have to find a new place to live, set up new utilities, change your insurance policies, register your vehicles in a new area, etc. etc.

Moving somewhere new almost always costs more money than you think that it will.

Then, once you get to a new location, often you don’t have the same “connections” that you did in the place where you used to live.

And in today’s economy, having “connections” is one of the only ways that you can get a good job.

On the flip side, there are actually a few areas of the United States where the unemployment rate is low right now and where there do seem to be some good jobs available.

When people ask me where to look for a job, I tell them to check out North and South Dakota.  It is cold as the dickens up there, but if you can handle the cold you just might be able to find work.

However, it is extremely risky to move somewhere new without having a job first.  Most people that have been through that “adventure” know what I am talking about.

But sometimes in life you have to take a risk.  Today there are over 47 million Americans that are living in poverty, and that number is increasing every single month.  Sitting on your couch and doing nothing is not going to get you where you need to be.

Rather than just sit there and sink even deeper into desperation, an increasing number of Americans are deciding to make a move.  There are some areas of the United States that have become absolute hellholes.  After years of experiencing intense economic frustration in those hellholes, many Americans are picking up stakes and are heading for greener pastures.

For example, the following video report from RT describes how large numbers of people are now abandoning Riverside, California….

Years ago, I would tell people to look into government jobs because they were relatively more secure.  Unfortunately, that is no longer the case.

The following is a chart from the Federal Reserve of local government hiring over the past five years.  Obviously, the trend is not heading in a positive direction…. 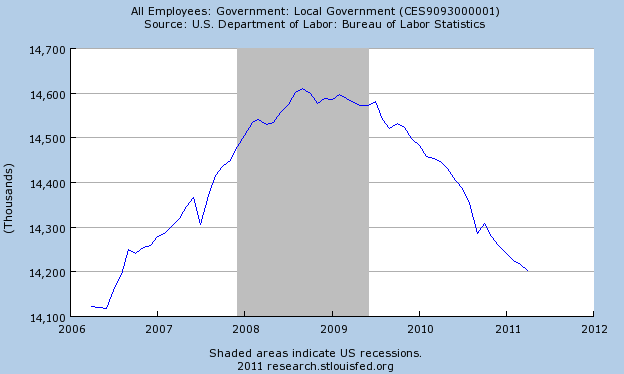 Most Americans don’t realize just how nightmarish the financial problems of many of our state and local governments are right now.

For example, the state of California is basically a financial basket case at this point.  In a recent article I discussed the cold, hard reality that California is broke and I explained some of the reasons why millions of people have already left the state….

Back in the 1960s and 1970s, there was a seemingly endless parade of pop songs about how great life was in California, and millions of young Americans dreamed of moving to the land of sandy beaches and golden sunshine.  But now all of that has changed.  Today, millions of Californians are dreaming about leaving the state for good.  The truth is that California is broke.  The economy of the state is in shambles.  The official unemployment rate has been sitting above 12 percent for an extended period of time, and poverty is everywhere.  For many Californians today, there are very few reasons to stay in the state but a whole lot of reasons to leave: falling housing prices, rising crime, budget cuts, rampant illegal immigration, horrific traffic, some of the most brutal tax rates in the nation, increasing gang violence and the ever present threat of wildfires, mudslides and natural disasters.  The truth is that it is easy to understand why there are now more Americans moving out of California each year than there are Americans moving into the state.  California has become a complete and total disaster zone in more ways than one, and an increasing number of Californians are deciding that enough is enough and they are getting out for good.

On the “Survive And Thrive TV” channel on YouTube, one Californian that was in the process of moving to a different state was recently interviewed as he was preparing to leave.  The following interview shows the mindset of many that are leaving California.  It also contains just a bit of strong language, so if you are sensitive to that you may want to not watch this video….

Other desperate Americans are taking a different approach.  Instead of moving to a new area, these Americans are coming up with “creative” ways of raising cash.

For example, a criminal gang of white middle-aged women in Detroit nicknamed the “Mad Hatters” has become so successful that they have made international news.  It is alleged that they have pulled off a stunning series of robberies.

According to the Telegraph, the “Mad Hatters” have stolen somewhere in the neighborhood of half a million dollars so far….

In a previous article I detailed many of the ways that Americans have “gone wild” lately, but it was even shocking to me to hear of a gang of middle-aged women terrorizing the city of Detroit.