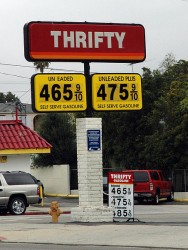 Do you ever have the feeling that there are holes in your pockets?  These days our money seems to slip through our hands faster than ever.  The Federal Reserve keeps telling us that the rate of inflation in 2011 is “close to zero”, and this is causing confusion for many Americans because they are making just as much money as they did in previous years but it doesn’t seem to go nearly as far.  So what in the world is going on out there?  Well, sadly, the truth is that we really don’t even know what the government considers “inflation” to be anymore.  The way that the U.S. government calculates inflation has changed an astounding 24 times since 1978.  You see, it is always politically beneficial to have a low inflation rate, so recent administrations have been changing the formula constantly in an attempt to look good.  But these days most Americans know something is up.  All they have to do is stop at a gas station, go shopping for food or open up their bills. The reality is that inflation in 2011 is about as bad as we saw back in the 1970s, it is just that the government is much less honest about it now.

Many years ago Kenny Rogers released a song that contained the following lyrics….

You got to know when to hold em, know when to fold em
Know when to walk away and know when to run
You never count your money when you’re sitting at the table
There’ll be time for counting when the dealer’s done

Well, the U.S. middle class has been dealt a losing hand, but in the game of life you just can’t fold.

Over the past 3 decades, the average household income for the bottom 80 percent of Americans has been remarkably flat.  In fact, over the past several years we have actually seen median household income decline several times. If you do not know about how the U.S. middle class is being ripped to shreds, just read this article.  Without a doubt, America is getting poorer.

Well, not the top 1 percent, but the vast majority of the rest of us sure are.

Meanwhile, prices have started to rise with a vengeance.

According to an article in the Daily Mail, a Memorial Day cookout will cost you 29 percent more this year than it did last year.

Will it be 29 percent more expensive again next year?

Perhaps some of us will just have to stop having Memorial Day cookouts because we can’t afford them anymore.

The price of gas is also digging into our paychecks big time.

A gallon of gas costs about a dollar more than it did a year ago, but we can’t avoid buying gas.  All of us have got to get to work and drive to the store.

Sadly, each time the price of gasoline goes up 50 cents it takes about $70 billion out of the U.S. economy (on a yearly basis).

A recent article in USA Today described the kind of impact these high gas prices are having on average American families….

For every $10 the typical household earns before taxes, almost a full dollar now goes toward gas, a 40 percent bigger bite than normal.

But don’t worry, according to Ben Bernanke we barely have any inflation at all in 2011.

Some companies are trying to avoid raising their prices by reducing their package sizes.  A recent article posted on Marketwatch entitled “Inflation diet: same price, less product” explored this phenomenon in detail.  Millions of Americans are going to the supermarket and are finding that many of their favorite products are now 10 or 20 percent smaller and yet they are paying the same price as before.

Another thing that is happening is that product quality is going down.  Have you noticed how things just don’t seem to be made the way that they used to?  This is not a coincidence.

According a recent article on CNBC, retailers are skimping on quality as a way to deal with rising costs….

According to Global Hunter Securities Macro and Consumer Strategist Richard Hastings, retailers have been collaborating with their production contractors for about two years. They are trying to push back on the total volume, cost and weight of every unit.

“Along the way, the consumer barely noticed. By now, everybody knows something is wrong,” said Hastings. “If we had to put a number on it, it’s probably a 7.5% decline in total quality and durability of products compared to a bigger increase in the cost of production per unit made outside of the U.S.”

But no matter how hard companies try to hide it, at some point the American people are going to wake up and they are going to realize that they aren’t getting as much for their money as they were before.

This is why so many people get upset when the Federal Reserve and the U.S. government devalue our money.  Inflation is a “hidden tax” on every single one of us.  When our dollars don’t buy as much stuff, that means that we are all poorer than we were before.

Once upon a time, a government job was the safest kind of a job you could have.  Sadly, as a recent Reuters article noted, those days are long gone….

Around 450,000 people who work for U.S. states, counties, cities, towns and villages could get pink slips in fiscal 2012, sharply up from the 300,000 positions shed this year, a report said on Monday.

So should we, as many of our liberal friends insist, tax the rich so that we can pay for all of those government workers?

Well, the truth is that the wealthy are already being taxed into oblivion.  If you doubt this, just read this editorial in The Wall Street Journal: “A 62% Top Tax Rate?”

Most of the “ultra-wealthy” have learned how to avoid most of this taxation by moving their wealth offshore.  In fact, as I have written about previously, it is estimated that a third of all the wealth in the world is now held in “offshore” tax havens.

So why are we seeing so much inflation right now?

Well, I covered that in my previous article entitled “When Faith In U.S. Dollars And U.S. Debt Is Dead The Game Is Over – And That Day Is Closer Than You May Think“.

The Federal Reserve and our politicians in Washington D.C. have been very naughty.  They have been systematically destroying the value of our dollars.

Someday when you are using your money as toilet paper because toilet paper is actually much more valuable than dollars are you will wish that the American people had stood up and insisted on a different path.

Don’t laugh – during the hyperinflation that the Weimar Republic experienced in the 1920s, German citizens were actually burning stacks of money in their furnaces in order to keep their homes warm.

100 years ago, a U.S. dollar had more than 20 times the purchasing power than it has today.

Sadly, we are now in a terminal phase of dollar devaluation.  It is only going to get worse from here.  Someday we will look back and long for the days of “low inflation” that we had back in 2011.