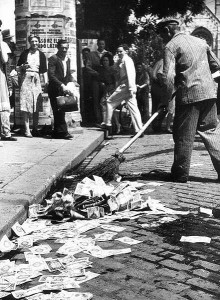 Ronald Reagan once famously declared that inflation is a tax, but sadly most Americans did not really grasp what he was talking about.  If the American people truly understood what inflation was doing to them, they would be screaming bloody murder about monetary policy.  Inflation is an especially insidious tax because it is not just a tax on your income for one year.  It is a continual tax on every single dollar that you own.  As your money sits in the bank, it is constantly losing value.  Over time, the effects of inflation can be absolutely devastating.  For example, if you put 100 dollars in the bank in 1970, those same dollars today would only have about 17 percent of the purchasing power that they did back then.  In essence, you were hit by an 83 percent “inflation tax” and all you did was leave your money in the bank.  So who is responsible for this?  Well, the Federal Reserve controls monetary policy in the United States, and the inflationary monetary policy that the Fed has gotten all of us accustomed to is taxing the living daylights out of us.  This is madness, and it needs to stop.

In previous articles I have discussed how the Federal Reserve creates money.  If you have not read those articles yet, you can find a few of them here, here and here.

The Federal Reserve system is designed to have the U.S. money supply expand indefinitely.

And that is exactly what has happened since 1913.

But when the money supply expands, there are very serious consequences.

Every time more money comes into existence, the dollars that you and I are already holding become less valuable because now there are more dollars chasing the same amount of goods and services.

Right now, the U.S. government says that the annual rate of inflation is somewhere around 2 percent.  Those of you that have to buy food and gas on a regular basis realize how much of a joke that is.

Thankfully, there are others out there that keep track of these statistics as well.  According to John Williams of shadowstats.com, if inflation was measured the same way that it was back in 1980, the annual rate of inflation would be more than 10 percent right now.

But let’s use the doctored government numbers for a moment.  Using the doctored numbers, what inflation has done to all of us is still absolutely horrific.  Just check out the chart below.  This is what the Federal Reserve was designed to do.  It was designed to constantly expand the money supply and create inflation that never ends…. 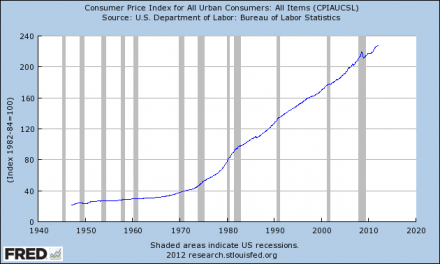 Most of us have been living in an inflationary environment for so long that we have come to accept it as normal.

Most Americans believe that prices are supposed to just keep going up as time goes by.

Unfortunately, we have now entered an era when prices are going up much faster than wages are.  Family budgets are being squeezed tighter and tighter as the inflation tax keeps taking a bigger and bigger toll on all of our paychecks.

I remember the days when I could go into the grocery store and get a large bag of brand name potato chips for 99 cents.

I remember the days when I could get all the groceries that I needed for an entire week for 20 bucks.

Unfortunately, those days are long gone.

Have you been to the grocery store lately?

When I go to the grocery store these days I almost get the feeling that someone is going to ask me to fill out a credit application.

When I get to the checkout counter I almost get the feeling that the cashier is going to ask me if I want to pay with an arm or a leg.

But food is not the only thing going up.  Electricity bills in the United States have risen faster than the overall rate of inflation for five years in a row.  There are millions of American families that are keeping the heat really, really low this winter in an attempt to make ends meet.

Health care is another thing that has become ridiculously expensive.  During the Obama administration, worker health insurance costs have risen by 23 percent.

Of course we all know what is happening with the price of gasoline.  The average price of a gallon of gasoline in the United States is now up to $3.72.  It has increased by more than 90 percent since Barack Obama became president.

This is why so many economists get so upset when the Federal Reserve starts printing money like there is no tomorrow.  Inflation is a tax that is very cruel to average American families.  It destroys their wealth and it destroys the purchasing power of their paychecks.

This is one of the reasons why so many people out there are talking about “real money” like gold and silver.  Unlike fiat currency, precious metals tend to hold value over a very long period of time.

For example, it will take you about three times as much U.S. currency to buy a gallon of gasoline in 2012 as it did back in 1990.

But an ounce of silver will actually buy you more gasoline today than it did back then.

We see the same kind of thing happening with gold.

It is not that gold is becoming so much more valuable.  It is just that the U.S. dollar is losing value on a continual basis.

So why don’t the U.S. government and the Federal Reserve quit flooding our economy with more paper money?

Sadly, our leaders seem to have a never ending addiction to more paper money and the American people are not demanding change.

On Wednesday, Federal Reserve Chairman Ben Bernanke told Congress that the Federal Reserve may have to implement even more stimulus measures in order to help the economy.

Of course such talk is utter insanity considering what Bernanke and his cohorts have already done to the monetary base over the past few years…. 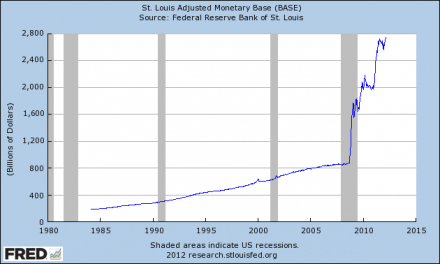 Thankfully, the vast majority of that money is still trapped in the financial system.  If all of that money was floating around on the street inflation would be far worse.

Those of you that think that the surging stock market is a sign of “economic recovery” should realize that the market has been pumped up by huge amounts of funny money from the Federal Reserve.  Just because the number of dollars circulating has increased does not mean that things are getting better.

There is much more to all of this of course, but what is important for the man and the woman on the street is the fact that when the Federal Reserve expands the money supply it is a tax on all of us and it makes all of us poorer.

So what do you think about the inflation tax and the reckless monetary policy of the Federal Reserve? 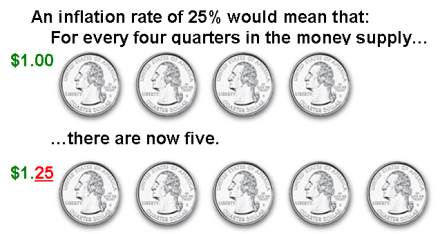