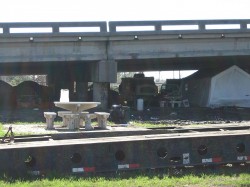 Economic despair is beginning to spread rapidly in America.  As you read this, there are millions of American families that are just barely hanging on by their fingernails.  For a growing number of Americans, it has become an all-out battle just to be able to afford to sleep under a roof and put a little bit of food on the table.  Sadly, there are more people than ever that are losing that battle.  Tonight, tens of thousands of formerly middle class Americans will be sleeping in their cars, even though that is illegal in many U.S. cities.  Tens of thousands of others will be sleeping in tent cities or on the streets.  Meanwhile, communities all over America are passing measures that are meant to push tent cities and homeless people out of their areas.  It turns out that once you lose your job and your home in this country you become something of an outcast.  Sadly, the number of “outcasts” is going to continue to grow as the U.S. economy continues to collapse.

Most Americans that end up living in their cars on in tent cities never thought that it would happen to them.

An article in Der Spiegel profiled one American couple that is absolutely shocked at what has happened to them….

Chanelle Sabedra is already on that road. She and her husband have been sleeping in their car for almost three weeks now. “We never saw this coming, never ever,” says Sabedra. She starts to cry. “I’m an adult, I can take care of myself one way or another, and same with my husband, but (my kids are) too little to go through these things.” She has three children; they are nine, five and three years old.

“We had a house further south, in San Bernardino,” says Sabedra. Her husband lost his job building prefab houses in July 2009. The utility company turned off the gas. “We were boiling water on the barbeque to bathe our kids,” she says. No longer able to pay the rent, the Sabedras were evicted from their house in August.

Sadly, if child protective services finds out about that family those kids will probably be stolen away and never returned.

Unfortunately, what has happened to that family is not an isolated incident.  As rampant unemployment has spread across America, the number of people that have lost their homes has soared.

Today, it is estimated that approximately a third of the homeless population in Seattle live in their cars.

It is even happening to my readers.  A reader named JD left the following comment on one of my articles a while back….

Desperation is rising all over America.  Most people had hoped to see an economic recovery by now but it just hasn’t happened.

The phenomenon of Americans living in their cars has become so prominent that even Time Magazine has done a story about it….

For people who cannot afford rent, a car is the last rung of dignity and sanity above the despair of the streets. A home on wheels is a classic American affair, from the wagon train to the RV. Now, for some formerly upwardly mobile Americans, the economic storm has turned the backseat or the rear of the van into the bedroom. “We found six people sleeping in their cars on an overnight police ride-along in December,” says John Edmund, chief of staff to Long Beach councilman Dee Andrews. “One was a widow living in a four-door sedan. She and her husband had been Air Force veterans. She did not know about the agencies that could help her. I had tears in my eyes afterwards.”

Unfortunately, it turns out that sleeping in cars has been made illegal in many areas of the United States.

In many cities, police are putting boots on the cars and when the homeless owners can’t pay the fines the vehicles are being taken away from them.

Venice, California is one place where people have been arrested for living in vehicles.  Venice had been a popular spot for people living in their RVs to go, but police started arresting people that were living in RVs and they began towing away their vehicles. The following is an excerpt from an article that appeared on the Daily Kos website….

They took Eric while he was changing his battery in his car. Claimed he lived in his car. A few days later they went to 3th Street and took his RV because he was in jail and no one moved it for 72 hours. Saturday they did a sweep of 7th and took Bear and his RV. They also took Elizabeth’s RV but do not know if they took Elizabeth but can not find her. The police went to 6th and took the white RV that always parks by Broadway on 6th. Everyday they take 1 to 4 RVs. Very soon there will be no one left.

Once you are down on your luck in America you will quickly find that authorities will try to take everything else you still have away from you.

The United States can be a very brutal place to be if you are poor.

All over America, communities are making tent cities illegal or they are simply just chasing them away.

It turns out that many Americans really don’t like large numbers of homeless people camping out in their neighborhoods.

But many of those now living in tent cities used to be just like you and me.

What is being done to tent cities in some areas of the country is absolutely disgusting.

For example, who could ever forget this video of police in St. Petersburg, Florida using box cutters to slash up the tents of the homeless….

What goes through your mind when you watch something like that?

If you don’t feel at least a little bit of compassion for those people then something is wrong.

You never know – you might be the next one forced to take refuge in a tent city.

So what should we do with all of the Americans that are being forced out of their homes by this economy?

Should we just round them all up and put them into fenced camps?

Don’t laugh – we are getting closer to that kind of thing every day.

We live in very frightening times.

Poverty is absolutely exploding in America.  The number of Americans that are going to food pantries and soup kitchens has increased by 46% since 2006.  There are 44 million Americans on food stamps.  If it was not for measures like these, the streets of America would be filled with destitute people.

Things are tough out there and they are about to get tougher.

According to the New York Times, this is going to drain 37 billion dollars out of the wallets of unemployed Americans that are just barely hanging on.

What in the world is that going to do to the economy?

This all comes at a time when it looks like unemployment is going to start rising once again.

Cisco has just announced that they are going to be laying off 10,000 workers.  Other large firms are expected to announce more layoffs shortly.  The number of good jobs continues to shrink.

There are other signs that the economy is slowing once again.  Pre-orders for Christmas toys are way down.  Vacancies at U.S. shopping malls are rising again.  Nearly every major poll shows that Americans are extremely pessimistic about the economy right now.

So why in the world is all of this happening?

Where in the world did all of our jobs go?

Well, it turns out that millions of our jobs have been shipped overseas where the labor is far, far cheaper and it is really starting to catch up with us.

On The American Dream website, I just finished an article entitled “How Globalism Has Destroyed Our Jobs, Businesses And National Wealth In 10 Easy Steps“.  It is a 2500 word essay that explains how globalization has absolutely gutted our economy.  The article will hopefully help you understand why so many good jobs have left the United States and why they aren’t coming back.

Many of our great cities that used to be the envy of the entire globe are now a bad joke to the rest of the world.

The following is what one reporter from the UK found when he visited one of the worst areas of Detroit….

Occasionally a half-ruined or half-burned house still stands to remind you that this used to be a cityscape. Pathetic, besieged knots of surviving homes remind you of what was once here. Sometimes amazing efforts have been made to keep them smart. More often, they haven’t.

Many bear menacing notices warning visitors to stay away. On the door of one, easy to imagine as a neat home with an iron-pillared porch where the head of the family must once have sat on summer evenings, are the words ‘Enter at ya own risk’ accompanied by a crude drawing of an angry face.

I ventured into a nearby ruin, smashed, charred and half-filled with garbage. You have no idea who or what might be lurking in these houses.

But don’t laugh at Detroit.  What is happening in Detroit is coming to your area soon enough.

America is in an advanced state of decay.  The number of “outcasts” is going to multiply as more Americans lose their jobs and their homes.  Millions more Americans will be sleeping in their cars, in tent cities or on the streets before this is all over.

The U.S. economy is never going to get back to “normal”.  What we are living through now is the “new normal” and it is rip-roaring prosperity compared to what is coming.

Please show compassion to the people around you that are hurting right now.

You never know, as the economy continues to unravel it may be you that needs some compassion soon.