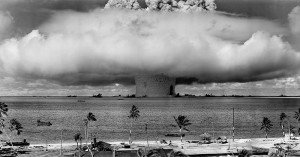 When financial markets in the United States crash, so does the U.S. economy.  Just remember what happened back in 2008.  The financial markets crashed, the credit markets froze up, and suddenly the economy went into cardiac arrest.  Well, there are very few things that could cause the financial markets to crash harder or farther than a derivatives panic.  Sadly, most Americans don’t even understand what derivatives are.  Unlike stocks and bonds, a derivative is not an investment in anything real.  Rather, a derivative is a legal bet on the future value or performance of something else.  Just like you can go to Las Vegas and bet on who will win the football games this weekend, bankers on Wall Street make trillions of dollars of bets about how interest rates will perform in the future and about what credit instruments are likely to default.  Wall Street has been transformed into a gigantic casino where people are betting on just about anything that you can imagine.  This works fine as long as there are not any wild swings in the economy and risk is managed with strict discipline, but as we have seen, there have been times when derivatives have caused massive problems in recent years.  For example, do you know why the largest insurance company in the world, AIG, crashed back in 2008 and required a government bailout?  It was because of derivatives.  Bad derivatives trades also caused the failure of MF Global, and the 6 billion dollar loss that JPMorgan Chase recently suffered because of derivatives made headlines all over the globe.  But all of those incidents were just warm up acts for the coming derivatives panic that will destroy global financial markets.  The largest casino in the history of the world is going to go “bust” and the economic fallout from the financial crash that will happen as a result will be absolutely horrific.

There is a reason why Warren Buffett once referred to derivatives as “financial weapons of mass destruction”.  Nobody really knows the total value of all the derivatives that are floating around out there, but estimates place the notional value of the global derivatives market anywhere from 600 trillion dollars all the way up to 1.5 quadrillion dollars.

Keep in mind that global GDP is somewhere around 70 trillion dollars for an entire year.  So we are talking about an amount of money that is absolutely mind blowing.

So who is buying and selling all of these derivatives?

Well, would it surprise you to learn that it is mostly the biggest banks?

These four banks have an overwhelming share of the derivatives market in the United States.  You might not be very fond of “the too big to fail banks“, but keep in mind that if a derivatives crisis were to cause them to crash and burn it would almost certainly cause the entire U.S. economy to crash and burn.  Just remember what we saw back in 2008.  What is coming is going to be even worse.

It would have been really nice if we had not allowed these banks to get so large and if we had not allowed them to make trillions of dollars of reckless bets.  But we stood aside and let it happen.  Now these banks are so important to our economic system that their destruction would also destroy the U.S. economy.  It is kind of like when cancer becomes so advanced that killing the cancer would also kill the patient.  That is essentially the situation that we are facing with these banks.

It would be hard to overstate the recklessness of these banks.  The numbers that you are about to see are absolutely jaw-dropping.  According to the Comptroller of the Currency, four of the largest U.S. banks are walking a tightrope of risk, leverage and debt when it comes to derivatives.  Just check out how exposed they are…

To get a better idea of the massive amounts of money that we are talking about, just check out this excellent infographic.

How in the world could we let this happen?

And what is our financial system going to look like when this pyramid of risk comes falling down?

Our politicians put in a few new rules for derivatives, but as usual they only made things even worse.

According to Nasdaq.com, beginning next year new regulations will require derivatives traders to put up trillions of dollars to satisfy new margin requirements.

Swaps that will be allowed to remain outside clearinghouses when new rules take effect in 2013 will require traders to post $1.7 trillion to $10.2 trillion in margin, according to a report by an industry group.

The analysis from the International Swaps and Derivatives Association, using data sent in anonymously by banks, says the trillions of dollars in cash or securities will be needed in the form of so-called “initial margin.” Margin is the collateral that traders need to put up to back their positions, and initial margin is money backing trades on day one, as opposed to variation margin posted over the life of a trade as it fluctuates in value.

So where in the world will all of this money come from?

Could these rules cause a sudden mass exodus that would destabilize the marketplace?

But things are definitely changing.  According to Reuters, some of the big banks are actually urging their clients to avoid new U.S. rules by funneling trades through the overseas divisions of their banks…

U.S. banks such as Morgan Stanley (MS.N) and Goldman Sachs (GS.N) have been explaining to their foreign customers that they can for now avoid the new rules, due to take effect next month, by routing trades via the banks’ overseas units, according to industry sources and presentation materials obtained by Reuters.

Unfortunately, no matter how banks respond to the new rules, it isn’t going to prevent the coming derivatives panic.  At some point the music is going to stop and some big financial players are going to be completely and totally exposed.

When that happens, it might not be just the big banks that lose money.  Just take a look at what happened with MF Global.

MF Global has confessed that it “diverted money” from customer accounts that were supposed to be segregated.  A lot of customers may never get back any of the money that they invested with those crooks.  The following comes from a Huffington Post article about the MF Global debacle, and it might just be a preview of what other investors will go through in the future when a derivatives crash destroys the firms that they had their money parked with…

Last week when customers asked for excess cash from their accounts, MF Global stalled. According to a commodity fund manager I spoke with, MF Global’s first stall tactic was to claim it lost wire transfer instructions. Then instead of sending an overnight check, it sent the money snail mail, including checks for hundreds of thousands of dollars. The checks bounced. After the checks bounced, the amounts were still debited from customer accounts and no one at MF Global could or would reverse the check entries. The manager has had to intervene to get MF Global to correct this.

How would you respond if your investment account suddenly went to “zero” because the firm you were investing with “diverted” customer funds for company use and now you have no way of recovering your money?

Keep an eye on the large Wall Street banks.  In a previous article, I quoted a New York Times article entitled “A Secretive Banking Elite Rules Trading in Derivatives” which described how these banks dominate the trading of derivatives…

According to the article, the following large banks are represented at these meetings: JPMorgan Chase, Goldman Sachs, Morgan Stanley, Bank of America and Citigroup.

When the casino finally goes “bust”, you will know who to blame.

Without a doubt, a derivatives panic is coming.

It will cause the financial markets to crash.

Several of the “too big to fail” banks will likely crash and burn and require bailouts.

As a result of all this, credit markets will become paralyzed by fear and freeze up.

Once again, we will see the U.S. economy go into cardiac arrest, only this time it will not be so easy to fix.

Do you agree with this analysis, or do you find it overly pessimistic?  Please feel free to post a comment with your thoughts below… 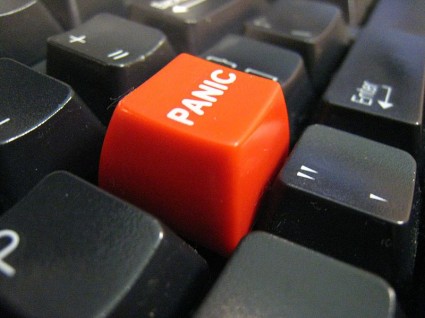