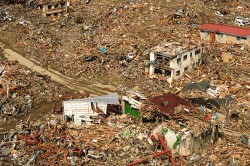 Now that nearly a month has gone by since the horrific tsunami in Japan on March 11th, it is starting to become clear just how much economic damage has been done.  The truth is that the Japanese economy is in much bigger trouble than most people think.  This is almost certainly going to be the most expensive disaster in Japanese history.  The tsunami that struck Japan on March 11th swept up to 6 miles inland, destroying virtually everything in the way.  Thousands upon thousands of Japanese were killed and entire cities were wiped off the map.  Yes, Japan is a resilient nation, but exactly how does a nation that is already drowning in debt replace dozens of cities and towns that are suddenly gone?  The truth is that thousands of square miles have been more completely destroyed than if they had been bombed by a foreign military force. The loss of homes, cars, businesses and personal wealth is almost unimaginable. It is going to take many years to rebuild the roads, bridges, rail systems, ports, power lines and water systems that were lost.  Nobody is quite sure when the rolling blackouts are going to end, and nobody is quite sure when all of the damaged manufacturing facilities are going to be fully brought back online.

On top of everything else, the nuclear crisis at Fukushima never seems to end.  In fact, it seems to get worse with each passing day.

According to the Los Angeles Times, it has now been announced that seawater off the coast of Japan near the Fukushima facility was recently found to contain 7.5 million times the legal limit of radioactive iodine….

The operator of Japan’s stricken Fukushima nuclear plant said Tuesday that it had found radioactive iodine at 7.5 million times the legal limit in a seawater sample taken near the facility, and government officials imposed a new health limit for radioactivity in fish.

Do you think anyone is going to want any Japanese seafood after this?

In fact, at this point one must really question the long-term prospects for the seafood industry in that entire region of Asia.  There are going to be tens of millions of people (myself included) that will no longer want anything to do with any seafood that comes from that part of the world.

Sadly, some nuclear experts now claim that it could take years to bring the reactors at Fukushima fully back under control.

At the end of this crisis, how large of an area around Fukushima will be uninhabitable?

Japan is the third largest economy in the world, but it never was a large nation to begin with.  Now that the tsunami and the nuclear crisis at Fukushima have made the amount of usable land significantly smaller, what is that going to mean for the future of the Japanese economy?

The truth is that there are already signs that the Japanese economy is regressing into another recession.

According to The Telegraph, one major manufacturing index in Japan has already shown a very serious decline….

The purchasing mangers’ index (PMI) gave an early indication of the extent of the damage wreaked on the economy as it dropped 6.5 points to a reading of 46.4, the largest slide since the survey began in late-2001.

In particular, the auto industry is really being affected by this crisis.  Vehicle supply chains all over the globe are now in a state of chaos.

Approximately 3,000 individual parts go into every single new vehicle.  If even one of those parts is missing, a new car or truck cannot be built.

So just how big of a problem are we looking at?

Well, it was originally projected that 72 million vehicles would be built around the globe in 2011.

As a result of the crisis in Japan, approximately 5 million of those vehicles will not be built.

That is very serious.

In fact, Goldman Sachs is projecting that this crisis is currently costing automakers in Japan $200 million every single day.

A recent article on CNBC detailed some of the problems that Japanese automakers are facing right now….

In the weeks ahead, car buyers will have difficulty finding the model they want in certain colors, thousands of auto plant workers will likely be told to stay home, and companies such as Toyota, Honda and others will lose billions of dollars in revenue. More than two weeks since the natural disaster, inventories of crucial car supplies — from computer chips to paint pigments — are dwindling fast as Japanese factories that make them struggle to restart.

Unfortunately, the worst for the auto industry is yet to come.  AutoNation is warning that “production disruptions will significantly impact product availability from Japanese auto manufacturers in the second and third quarters of 2011.”

Because of supply chain disruptions, a number of North American manufacturing facilities look like they will be shutting down at least for a while.

For example, Toyota has announced that it will be shutting down all of its North American factories for a certain period of time because of shortages of parts from Japan.

But Toyota is far from alone as a recent report in The Globe and Mail made quite clear….

Honda Motor Co. Ltd. has already slashed output by half at its North American plants, while Nissan Motor Co. Ltd. will shut all its U.S. and Mexican plants for at least one week in April. Ford Motor Co., too, has halted production at a truck plant in Kentucky this week.

So why don’t North American facilities just switch to other suppliers?

Unfortunately, as CNN recently noted, it is just not that simple….

Japanese companies also specialized in making the array of highly specialized computer chips that control everything from the engine to the brakes in modern cars. Computer chip production is a complex process that can take weeks and involves hundreds of individual steps, Morgan Stanley analyst Noriaki Hirakata said.

Not only that, but if an automaker is forced to find a new source for an electronic chip, the process of “certifying” a new computer chip supplier — that is, determining that a new company can meet all the requirements for cost, quality and quantity — can take as long as a year, Hirakata said.

The truth is that this is a complete and total economic disaster.

The Japanese economy is not going to be the same for many years to come.  In fact, many are now warning that this could be one of the triggers that could lead to another major global financial crisis.

One of the big fears is that Japan will need to sell off a large amount of U.S. Treasuries to fund the rebuilding of that nation.

If that were to happen, it could result in a “liquidity crisis” similar to what we saw in 2008.  Already the rest of the world is really starting to lose confidence in the U.S. dollar and in U.S. Treasuries, and if Japan starts massively dumping U.S. government debt things could get out of control fairly quickly.

In any event, it is undeniable that the Japanese economy has been absolutely devastated by this crisis.  In fact, when you combine the tsunami and the nuclear crisis, this could be the biggest economic disaster that any major industrial power has faced since World War 2.

So will the crisis in Japan push the rest of the globe into another major recession?