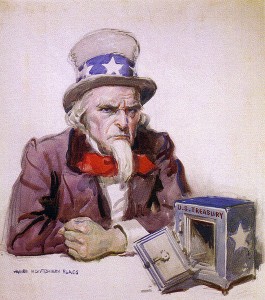 How do you decide whether you are wealthy or not?  Do you determine that by how much money you spend at the stores?  Of course not.  You can tell if you are wealthy or not by comparing your assets (the money in your bank account, equity in your home, etc.) to your liabilities (your mortgage, credit card debt, student loan debt, etc.).  Well, a lot of Americans seem to believe that just because a lot of money is circulating in our economy that it must mean that we are a wealthy nation.  But that is simply not true.  To tell whether or not America is a wealthy nation, you need to look at the balance sheet numbers.  And when you look at the balance sheet numbers, a very sobering story emerges.  Over the past three decades, government debt, business debt and household debt have absolutely exploded, but our assets have not.  That means that we are getting poorer as a nation.  Hopefully the shocking charts and statistics in this article will help a lot of Americans to wake up.  Yes, we once were the wealthiest nation on earth, but today America is no longer a wealthy nation.

We live during a time when U.S. households are becoming poorer.  This week the Federal Reserve announced that the total net worth of U.S. households declined by 4.1 percent in the 3rd quarter of 2011 alone.

That is a staggering decline.  The total net worth of U.S. households plummeted by $2.2 trillion during those three months.  When you break that down, it comes to approximately $7,800 for every single U.S. citizen.

But this is not the first time we have seen a huge decline in U.S. household wealth in recent years.

A recent article posted on CNN detailed the stunning drop in U.S. household wealth that we saw from 2007 to 2009….

Household wealth plunged $16.3 trillion in the two years from early 2007 to the first quarter of 2009, and has slowly been climbing since then. But with the drop in the third quarter of this year, households find their net worth still $9.4 trillion, or 14%, below the high they hit in early 2007, before the bursting of the housing bubble.

So right now the total net worth of U.S. households is $9.4 trillion below what it was back in 2007.

That certainly is not good news.

But not only is the total net worth of U.S. households going down, our incomes are going down as well.

Since December 2007, median household income in the United States has declined by a total of 6.8% once you account for inflation.

Not that incomes were rising very quickly prior to that time either.

Between 1979 and 2007, income growth for the bottom 90 percent of all U.S. income earners was only about 5 percent for that entire time period.

Meanwhile, household debt was absolutely skyrocketing.  Take a look at the following chart which shows what total U.S. household debt has done over the last three decades…. 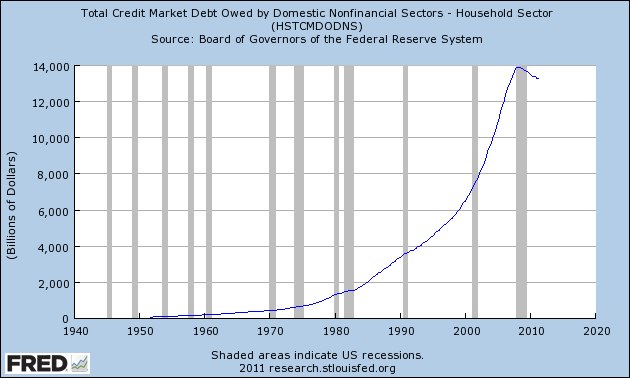 So income growth has been pretty much flat over the past three decades but household debt has been rising at an exponential pace for most of that time.

Yes, there has been a little bit of deleveraging during this economic downturn, but there are now signs that the deleveraging is rapidly coming to an end.

According to a recent CNN article, credit card use in the United States is experiencing a major upswing once again….

The truth is that U.S. households owe way, way too much money already.  According to a recent study conducted by the BlackRock Investment Institute, the ratio of household debt to personal income in the United States is now 154 percent.

We are up to our eyeballs in debt, and our incomes are not keeping up.

In addition, we have seen massive amounts of home equity wiped out in recent years.

An unusual thing has happened during this economic downturn.  For the first time in U.S. history, the banks have more equity in our homes than we do.  If you do not believe this, just check out this chart.

The truth is that the American people are not becoming wealthier.  They are becoming poorer.

And a shocking number of Americans are falling into poverty.  In 2010, 2.6 million more Americans fell into poverty, which set a new all-time record for a single year.

So obviously U.S. households are not doing well.

But what about the government? 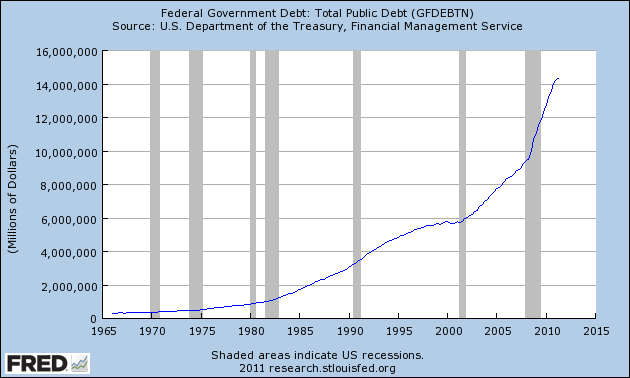 So is our ability to pay these debts 15 times greater than it was back then?

Our liabilities are exploding at an out of control rate but our assets are not.

Whether you are a running a family or running a government, that is a recipe for financial disaster.

The U.S. government has been running budget deficits of over a trillion dollars for several years now, and there is no sign that these trillion dollar deficits are going to stop any time soon.

So how much money is a trillion dollars?

Yet somehow the U.S. government has accumulated a debt that is well over 15 trillion dollars.

The Bush administration was a nightmare when it came to running up debt, but they have definitely been outclassed by the Obama administration….

*The U.S. national debt has been increasing by an average of more than 4 billion dollars per day since the beginning of the Obama administration.

*Since Barack Obama was sworn in, the share of the national debt per household has increased by $35,835.

And most U.S. government spending does not do a thing to build real wealth for this country.  For example, the total compensation that the federal government workforce brought in during 2010 is estimated to be about 447 billion dollars.

The truth is that our bloated federal government is a massive drain on our society.

But the federal government is not the only one with a debt problem.

The following chart from the Federal Reserve combines government debt, business debt and consumer debt.  As you can see, America is swimming in an ocean of more than 50 trillion dollars of debt…. 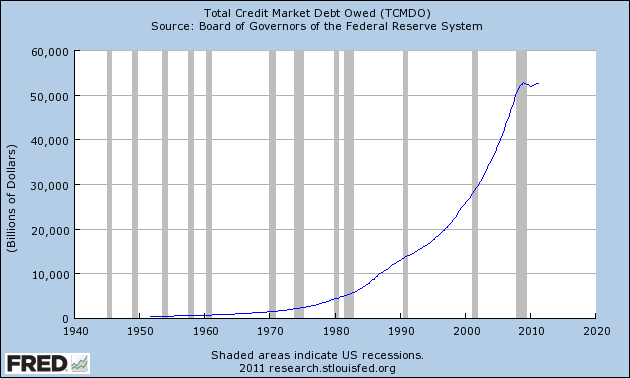 Meanwhile, we are bleeding national wealth at a staggering rate.

Every single month, tens of billions of dollars more goes out of this country than comes into it.

This represents a transfer of wealth that is so vast that it is almost impossible to believe.

Our dependence on foreign oil is greatly contributing to this.  It is being projected that for the first time ever, the OPEC nations are going to bring in over a trillion dollars from exporting oil this year.  Their biggest customer is the United States.

For a moment, imagine a giant map of the world.  Then imagine a pile of 7.5 trillion dollars sitting on the United States of America.

Well, then start taking big chunks of that money and start exchanging it for oil and for cheap plastic products until the entire pile is gone.

We burn up the foreign oil in our cars and most of the cheap plastic products end up being discarded fairly quickly.

But our loss of national wealth is permanent.

Meanwhile, we are facing national financial obligations in the years ahead that are absolutely nightmarish.

According to Boston University Professor Laurence J. Kotlikoff, the U.S. government is facing a “fiscal gap” of $211 trillion in the decades ahead.  The following comes from an article that Kotlikoff wrote for CNN earlier this year….

If you went out and liquidated all of the assets owned by all American citizens, all U.S. businesses and all levels of government in America, it would only cover about a third of that bill.

America is no longer a wealthy nation.

So when they tell you that the economy “grew” by 1 or 2 percent, please don’t think that means that America is becoming wealthier.

The truth is that our debts are growing at a far, far faster rate than our assets are.

That means that we are getting poorer.

Is there anyone out there that disagrees with that?