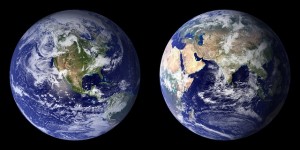 In general, over the last several decades the world has experienced an unprecedented era of peace and prosperity.  The opening up of relations with China and the “end of the Cold War” resulted in an extended period of cooperation between east and west that was truly unique in the annals of history.  But now things are shifting.  The civil war in Ukraine and the crash of MH17 have created an enormous amount of tension between the United States and Russia, and many analysts believe that relations between the two superpowers are now even worse than they were during the end of the Cold War era.  In addition, the indictment of five PLA officers for cyber espionage and sharp disagreements over China’s territorial claims in the South China Sea (among other issues) have caused U.S. relations with China to dip to their lowest point since at least 1989.  So could the emerging division between the east and the west ultimately plunge us into a period of global chaos?  And what would that mean for the world economy?

For as long as most Americans can remember, the U.S. dollar and the U.S. financial system have been overwhelmingly dominant.  But now the powers of the east appear to be determined to break this monopoly.  Four of the BRICS nations (China, Russia, India and Brazil) are on the list of the top ten biggest economies on the planet, and they are starting to make moves to become much less dependent on the U.S.-centered financial system of the western world.  For example, just last week the BRICS nations established two new institutions which are intended to be alternatives to the World Bank and the IMF…

So in their summit, from July 14 to 16, the five BRICS announced two major initiatives aimed squarely at increasing their power in global finance. They announced the launch of the New Development Bank, headquartered in Shanghai, that will offer financing for development projects in the emerging world. The bank will act as an alternative to the Washington, D.C.—based World Bank. The BRICS also formed what they’re calling a Contingent Reserve Arrangement, a series of currency agreements which can be utilized to help them smooth over financial imbalances with the rest of the world. That’s something the IMF does now.

Clearly, the idea is to create institutions and processes to supplement — and perhaps eventually supplant — the functions of those managed by U.S. and Europe. And they would be resources that they could control on their own, without the annoying conditions that the World Bank and the IMF always slap on their loans and assistance.

This comes at a time when both China and Russia are seeking to emphasize their own currencies and move away from using the U.S. dollar so much.

Even in the western media, it is being admitted that China’s yuan is “a growing force in global finance“, and according to CNBC the use of Chinese currency in international trade is growing very rapidly…

Usage of the renminbi among French companies – a new addition to this year’s list – was high at 26 percent.

And of course Russia has been actively pursuing a “de-dollarization strategy” for months now.  Each new round of economic sanctions pushes Russia even further in the direction of independence from the U.S. dollar, and Gazprom has been working hard to get large customers to switch from paying for natural gas in dollars to paying for natural gas in euros and other currencies.  For much more on this, please see my previous article entitled “Russia Is Doing It – Russia Is Actually Abandoning The Dollar“.

At this point, it seems clear that Russia plans to permanently decouple from the U.S. economy and the U.S. financial system.  Just today we learned that Vladimir Putin plans to make Russia less dependent on U.S. companies such as IBM and Microsoft, and any future rounds of sanctions are likely to cause even more damage to U.S. firms that do business in Russia.

But potentially much more troubling for the U.S. economy is the startling deterioration in the relationship between the Obama administration and China.  Some analysts are even describing this as “a tipping point”…

One day, the United States indicts five PLA officers for cybercrimes; the next, the United States claims victory in WTO disputes over car tariffs and rare earth minerals. All this is happening while the United States promises enduring support for Asian allies, and it has moved openly to challenge the legitimacy of Chinese territorial claims in the South China Sea. Meanwhile, China is busy creating facts on the ground and water. Last month, a $1 billion Chinese oil rig set up operations in territorial waters claimed by Vietnam. In the East China Sea, Chinese SU-27 fighter jets have come within 100 feet of Japanese surveillance aircraft.

The mood has soured, more than the usual ups and downs of big-power relationships. The question now is not whether a “new type of relationship” is in the offing, but rather, whether U.S.-Chinese relations have reached a tipping point.

Most Americans could not care less about what China is doing in the South China Sea, but to the Chinese this is a very, very big deal.  In fact, China just sent a surveillance vessel to Hawaii as a bit of payback for what they regard as U.S. “provocations” in the region.

In the old days, China would have probably never have done such a thing.  But China is gaining confidence as the gap between the U.S. military and the Chinese military rapidly closes…

Away from the Chinese military’s expanding capabilities in cyberspace and electronic warfare, Beijing is growing the size and reach of its naval fleet, advancing its air force and testing a host of new missiles, the Pentagon said Thursday.

An annual report to Congress on China’s evolving military capability concluded that the modernization was being driven in part by growing territorial disputes in the East and South China seas, as well as by Beijing’s desire to expand its presence and influence abroad.

In fact, the Chinese military has grown so powerful that we are now seeing headlines such as this one in The Week: “China thinks it can defeat America in battle”.

And the Russian military has made tremendous strides as well. Putin has been working hard to modernize the Russian nuclear arsenal, the Russians now have a “fifth generation” fighter jet that is supposedly far superior to the F-22 Raptor, and they have nuclear submarines that are so incredibly quiet that the U.S. Navy refers to them as “black holes“.

If Russia and China stay united, they are more than capable of providing a counterbalance to U.S. power around the globe.

But even if military conflict is not in our immediate future, the breakdown in relations between east and west could still have a dramatic impact on the global economy.

Over the years, the U.S. and China have developed a highly symbiotic relationship that fuels a tremendous amount of economic activity all over the planet.  Each year, we buy hundreds of billions of dollars of products from the Chinese.  Just imagine what our stores would look like if we took everything that was “made in China” out of them.  And after we send them giant piles of our money, we beg the Chinese to lend it back to us at ultra-low interest rates.  This arrangement has allowed China to become extremely wealthy and it has allowed Americans to enjoy a massively inflated standard of living fueled by ever increasing amounts of debt.

So what happens if this relationship starts breaking down?

Without a doubt, it could potentially lead to global chaos.

So keep a close eye on this emerging division between the east and the west.  It could end up being far more important than most Americans would ever dare to imagine.