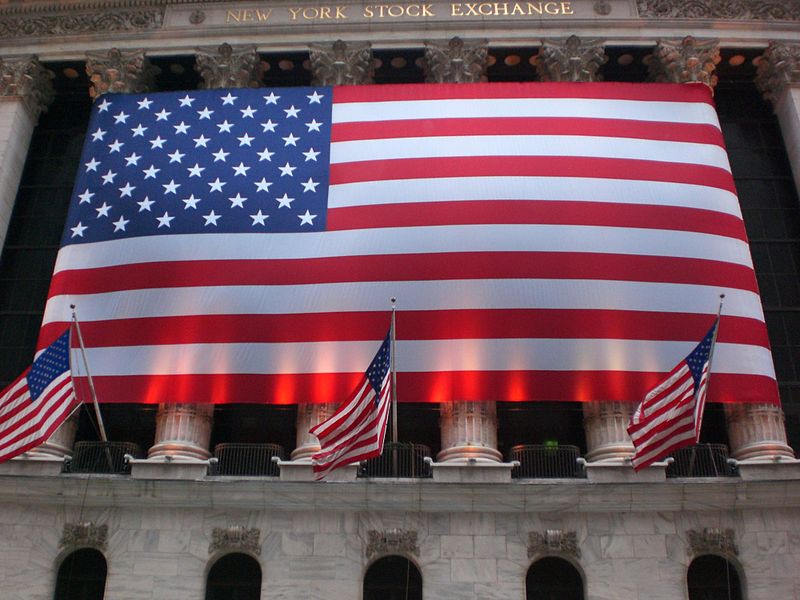 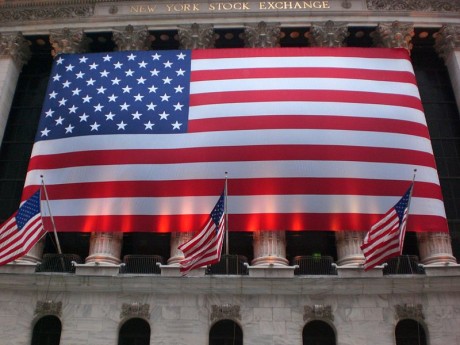 What has been happening on Wall Street the past few days has been nothing short of stunning.  On Thursday, the Dow Jones Industrial Average plummeted 358 points.  It was the largest single day decline in a year and a half, and investors are starting to panic.  Overall, the Dow is now down more than 1300 points from the peak of the market.  Just yesterday, I wrote about all of the experts that are warning about a stock market crash in 2015, and after today I am sure that a lot more people will start jumping on the bandwagon.  In particular, tech stocks are getting absolutely hammered lately.  The Nasdaq has fallen close to 3.5% over the past two days alone, and it has dropped below its 200-day moving average.  The Russell 2000 (a small-cap stock market index) is also now trading below its 200-day moving average.  What all of this means is that the stock market crash of 2015 has already begun.  The only question left to answer at this point is how bad it will ultimately turn out to be.

But now that the market has turned, tech stocks are starting to lead the way down…

The Dow and the S&P 500 are negative for the year. The so-called “FANG” stocks – Facebook, Apple, Netflix, and Google – were some of the biggest losers, and helped send the Nasdaq more than 2% lower. Biotechs also suffered big losses; the iShares Nasdaq Biotechnology ETF fell 4% to a three-month low. The Vix, which gauges market expectations for near-term shifts in the S&P 500, surged more than 21%.

And Twitter is absolutely imploding.  It has fallen below its IPO price, and at this point it is now down 65 percent from the peak.

Of course it was inevitable that Twitter and these tech stocks would start falling eventually.  I specifically warned my readers about Twitter’s stock price nearly two years ago.  I hope people listened to what I was saying and got out in time.

This current market crash is happening in the context of a full-blown global financial meltdown.  Stock markets all over the planet are collapsing, and currencies are being devalued left and right.  The following comes from a recent piece by Wolf Richter…

Hot money is already fleeing emerging markets. Higher rates in the US will drain more capital out of countries that need it the most. It will pressure emerging market currencies and further increase the likelihood of a debt crisis in countries whose governments, banks, and corporations borrow in a currency other than their own.

This scenario would be bad enough for the emerging economies. But now China has devalued the yuan to stimulate its exports and thus its economy at the expense of others. And one thing has become clear on Wednesday: these struggling economies that compete with China are going to protect their exports against Chinese encroachment.

Hit by sharp declines in crude prices, the oil-producing nation of Kazakhstan introduced a freely floating exchange rate for the tenge, which subsequently lost more than a quarter of its value.

The State Bank of Vietnam (SBV) devalued the dong (VND) by 1 percent against the dollar on Wednesday—its third adjustment so far this year—and simultaneously widened the trading band to 3 percent from 2 percent previously, the second increase in six days.

A quarter of its value?

Now that is a devaluation.

In the coming days, we are likely to see even more emerging markets devalue their currencies in a global “race to the bottom”.  But this “race to the bottom” presents a great danger to financial markets.  As I have written about previously, there are 74 trillion dollars in derivatives globally that are tied to the value of currencies.  As foreign exchange rates start flying around all over the place, there are going to be financial institutions out there that are going to be losing obscene amounts of money.

I cannot say the “d word” enough.  Derivatives are going to play a starring role during this financial collapse, and so that is a word that you will want to be listening for very carefully in the weeks and months to come.

The meltdown that has already been affecting much of the rest of the planet is now starting to affect us.  And it was inevitable that it would.  I like how Clive P. Maund put it recently…

Many lesser markets around the world are toppling, but somehow the big Western markets of Europe, Japan and the US are staying aloft. If you have ever made a sand castle on the beach and watched what happened when the tide comes in, you will recall that it is the weaker outer ramparts and smaller turrets that collapse first, and the big central towers that hold out the longest. The weaker outer ramparts and smaller turrets are the Emerging Markets which are already crumbling, and it won’t be long until the big central towers – the big Western Markets, go the same way – everything is pointing to it.

The funny thing is that even though all of the signs are pointing to a nightmarish global financial crisis, the mainstream media continues to insist that everything is going to be just fine.

In fact, CNBC says that the recent dip in stock prices is a “bull indicator” and they are encouraging everyone to pour lots more money into stocks.

But of course the truth is that what financial conditions are really telling us is that stocks have much, much farther to fall.

For instance, high yield credit is starting to crash just like it did prior to the stock market crash of 2008.  Stocks and high yield credit usually tend to track one another quite closely, and so when there is a divergence that is a huge red flag.  And as this chart from Zero Hedge demonstrates, a very large divergence has developed in recent months… 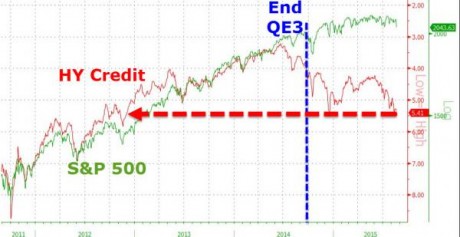 Sadly, the 358 point plunge for the Dow on Thursday was just the beginning.

Yes, there will be up days and down days, but we are now officially entering the “danger zone” as we roll into the months of September and October.