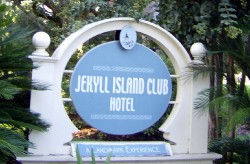 Sadly, most Americans have no idea how the Federal Reserve came into being.  Forbes magazine founder Bertie Charles Forbes was perhaps the first writer to describe the secretive nature of the original gathering on Jekyll Island in a national publication….

Picture a party of the nation’s greatest bankers stealing out of New York on a private railroad car under cover of darkness, stealthily riding hundred of miles South, embarking on a mysterious launch, sneaking onto an island deserted by all but a few servants, living there a full week under such rigid secrecy that the names of not one of them was once mentioned, lest the servants learn the identity and disclose to the world this strangest, most secret expedition in the history of American finance. I am not romancing; I am giving to the world, for the first time, the real story of how the famous Aldrich currency report, the foundation of our new currency system, was written… The utmost secrecy was enjoined upon all. The public must not glean a hint of what was to be done. Senator Aldrich notified each one to go quietly into a private car of which the railroad had received orders to draw up on an unfrequented platform. Off the party set. New York’s ubiquitous reporters had been foiled… Nelson (Aldrich) had confided to Henry, Frank, Paul and Piatt that he was to keep them locked up at Jekyll Island, out of the rest of the world, until they had evolved and compiled a scientific currency system for the United States, the real birth of the present Federal Reserve System, the plan done on Jekyll Island in the conference with Paul, Frank and Henry… Warburg is the link that binds the Aldrich system and the present system together. He more than any one man has made the system possible as a working reality.

It was a system that was designed by the bankers and for the bankers.  Now, the bureaucrats running the system are returning to Jekyll Island to congratulate themselves.  Those attending the conference on November 5th and 6th include Federal Reserve Chairman Ben Bernanke, former Fed Chairman Alan Greenspan, Goldman Sachs managing director E. Gerald Corrigan and the heads of the various regional Federal Reserve banks.  You can view the entire agenda of the conference right here.  It looks like that there will be plenty of hors d’oeuvres to go around, but should the Federal Reserve really be celebrating their accomplishments at a time when the U.S. economy is literally falling to pieces?

Today, 63 percent of Americans do not think that they will be able to maintain their current standard of living.  1.47 million Americans have been unemployed for more than 99 weeks.  We are facing a complete and total economic disaster.

Today, the Federal Reserve has more power over the economy than any other single institution in the United States.  It is the Fed that primarily determines if we will see high inflation or low inflation, whether the money supply with expand or contract and whether we will have high interest rates or low interest rates.  The President and the U.S. Congress have far less power to influence the economy than the Federal Reserve does.

As this election has demonstrated, the American people are absolutely furious about the state of the U.S. economy, but American voters have been mostly blaming our politicians.  They just don’t understand that it is actually the Federal Reserve that has the most control over the performance of the economy.

So how has the Federal Reserve performed over the years?

Well, since 1913 inflation has been on a relentless march upwards, U.S. government debt has increased exponentially and the U.S. dollar has lost over 96 percent of its value.

That is not a record to be celebrating.

Now many at the Federal Reserve are touting more “quantitative easing” as the solution to our economic problems.  But anyone with a brain should be able to see that creating a gigantic pile of paper money out of thin air and dumping it into the economy is only going to make our long-term problems even worse.

The sad truth is that the Federal Reserve is at the very core of our economic and financial problems, and that is nothing to celebrate.