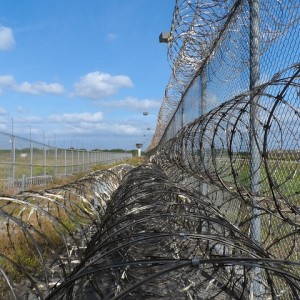 If there is a major Ebola pandemic in America, all of the liberties and the freedoms that you currently enjoy would be gone.  If government officials believe that you have the virus, federal law allows them to round you up and detain you “for such time and in such manner as may be reasonably necessary.”  In addition, the CDC already has the authority to quarantine healthy Americans if they reasonably believe that they may become sick.  During an outbreak, the government can force you to remain isolated in your own home, or the government may forcibly take you to a treatment facility, a tent city, a sports stadium, an old military base or a camp.  You would not have any choice in the matter.  And you would be forced to endure any medical procedure mandated by the government.  That includes shots, vaccines and the drawing of blood.  During such a scenario, you can scream about your “rights” all that you want, but it won’t do any good.

In case you are tempted to think that I am making this up, I want you to read what federal law actually says.  The following is 42 U.S.C. 264(d).  I have added bold for emphasis…

(1) Regulations prescribed under this section may provide for the apprehension and examination of any individual reasonably believed to be infected with a communicable disease in a qualifying stage and (A) to be moving or about to move from a State to another State; or (B) to be a probable source of infection to individuals who, while infected with such disease in a qualifying stage, will be moving from a State to another State. Such regulations may provide that if upon examination any such individual is found to be infected, he may be detained for such time and in such manner as may be reasonably necessary. For purposes of this subsection, the term “State” includes, in addition to the several States, only the District of Columbia.

(2) For purposes of this subsection, the term “qualifying stage”, with respect to a communicable disease, means that such disease—

(A) is in a communicable stage; or

(B) is in a precommunicable stage, if the disease would be likely to cause a public health emergency if transmitted to other individuals.

In addition, as I discussed above, the CDC already has the authority to isolate people that are not sick to see if they do become sick.  The following is what the CDC website says about this…

On a very basic level, we are already starting to see this happen in Texas.  Obviously Thomas Eric Duncan has already been “isolated”, and now his family has been placed under mandatory quarantine and ordered not to leave their home for 21 days…

Texas health officials have placed the Dallas family of a Liberian national infected with Ebola under quarantine and ordered them not to leave their home or have any contact with outsiders for 21 days without approval of the local or state health department.

The “control order” also requires the family of Thomas Eric Duncan to be available to provide blood samples and agree to any testing required by public health officials. Officials said Thursday that the four or five family members could face criminal charges for violating the order, which was delivered to them in writing Wednesday evening.

If we could all just stay in our homes during a national Ebola emergency, that wouldn’t be so bad.

But if thousands (or even millions) of cases start popping up it simply will not be possible for law enforcement authorities to monitor so many homes.

When just one family is suspected of carrying Ebola, they can be easily monitored in a “volunteer home isolation” scenario. But what happens when it’s 100 families? 500? 1,000? At that point, there aren’t enough state or federal workers to keep an eye on these people, and the quarantine effort will almost certainly shift to forced relocation into quarantine camps.

Those camps will, of course, be called something nice-sounding like “Community Health Centers.” No one in government or media will call them camps, even though they are camps. The word “camp” brings up echoes of “concentration camps” and the government definitely wants to avoid that association.

If one particular town or city is hit especially hard with the virus, there is a likelihood of the entire town being quarantined. No one in, no one out. Everybody will be ordered to “shelter in place” in their own homes for at least 21 days while health workers wearing hazmat suits go door to door, identifying Ebola victims and “relocating” them to the “Community Health Centers.”

If that sounds like “martial law” to you, that is because it would essentially be martial law.

For the moment, public health authorities are pledging that nothing like this will ever happen because they have everything completely under control.

Others are not so sure.

For example, on Thursday a doctor from Missouri named Gil Mobley checked in for a flight at Atlanta’s Hartsfield-Jackson International Airport dressed in a mask, goggles, gloves, boots and a protective white jumpsuit.  On the back of the jumpsuit, he had written the following words:  “CDC is lying!”

Mobley believes that we are not being told the truth about the spread of Ebola.  And he is convinced that as Ebola continues to spread exponentially, that we will eventually “be importing clusters of Ebola on a daily basis”…

“Once this disease consumes every third world country, as surely it will, because they lack the same basic infrastructure as Sierra Leone and Liberia, at that point, we will be importing clusters of Ebola on a daily basis,” Mobley predicted. “That will overwhelm any advanced country’s ability to contain the clusters in isolation and quarantine. That spells bad news.”

Mobley, a Medical College of Georgia graduate who had an overnight layover after flying to Atlanta from Guatemala on Wednesday, said that he feels that the CDC is “asleep at the wheel” when it comes to screening passengers arriving in the United States from other countries.

“Yesterday, I came through international customs at the Atlanta airport,” the doctor told The Atlanta Journal-Constitution. “The only question they asked arriving passengers is if they had tobacco or alcohol.”

Earlier on Thursday, there were reports of people being tested for Ebola in Hawaii, Kentucky and Utah.  None of those tests has produced a confirmed case of Ebola as I write this article.

Many Americans are still treating this Ebola crisis as if it was just one big joke.

But Ebola is no joking matter.  This is a very, very serious disease.

‘The next morning I came in and saw him lying as I had left him, on the bed.

‘He wasn’t breathing. I remember going up to him and looking at his face, his lips were drawn back in a grimace, and his eyes were vacant, lying in a pool of his own diarrhea.

‘I lifted his hand to try, just to confirm things and his whole body turned rigid and cold.

‘I put him in a body bag as his sister looked on.

‘She seemed more baffled than anything, not really understanding what was happening. I carried his corpse outside with the others.

‘The little girl, she deteriorated the next day. Overnight, the following night she had intravenous fluids and the line came out and she bled.

‘I came in the following morning and she was covered in blood. She still had a very puzzled expression on her face and she wasn’t breathing.

‘So I put her in a bag and left her next to her brother. She was a beautiful little girl.’

Hopefully our medical authorities are correct and this virus will not spread easily in this country.

But at this point even some of our top politicians are wondering if we are truly getting accurate information.  For example, check out what U.S. Senator Rand Paul had to say on the Laura Ingraham Show just recently…

“I really think that it is being dominated by political correctness and I think because of political correctness we’re not really making sound, rational, scientific decisions on this.” Paul said referring to statements issued by the CDC last week that assured there was little risk of an outbreak occurring in the US.

“We should not underestimate the transmissibility of this,” said Paul, a doctor himself, adding that medical workers have been contracting the virus even though they are taking precautions and covering themselves with gowns and masks.

“My suspicion is that it’s a lot more transmissible than that if people who are taking every precaution are getting it. There are people getting it who simply helped people get in or out of a taxicab.” Paul said.

Let’s pray that this crisis fizzles out, because if it doesn’t, we could truly be looking at the greatest health crisis that any of us have ever seen.

And along with countless numbers of people getting sick and dying, we would also have to deal with government-imposed medical martial law.

The stakes are extremely high, and so let us hope that this crisis does not escalate any further.