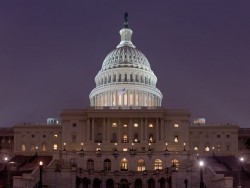 For decades, the U.S. government has had a AAA rating.  On the scales used by the big three credit rating agencies, that is the highest credit rating that a government can get.  Moody’s scale actually uses lettering that is a little different from the other two big agencies (“Aaa” instead of  “AAA”), but you get the point. Right now, the U.S. government is closer than ever to losing its AAA rating.  The threat of a rating downgrade is going to continue to grow regardless of how the political theater that we are watching unfold in Washington D.C. plays out.   The truth is that the federal government has accumulated a debt that is so vast that it will never be paid back.  In fact, we are rapidly approaching the point when this debt will no longer be serviceable.  If the credit rating of the U.S. government is not slashed right now, it will be soon enough.  In fact, the truth is that the U.S. government is such a financial mess that it should have been done long ago.  But whenever the United States does lose its AAA rating, we could potentially see financial hell unleashed because it will also mean that there will almost certainly be a wave of credit rating downgrades from coast to coast.

As I have written about previously, government debt becomes more painful the higher that interest rates go.  When the big credit agencies downgrade the credit rating of a government, that is a signal to investors that they should ask for higher interest rates on debt issued by that government.

This does not always play out in practice (just look at Japan), but nations such as Greece, Portugal and Ireland sure are going through financial hell right now as they deal with reduced credit ratings and soaring interest rates.

Right now, the U.S. government is able to borrow gigantic quantities of money at ridiculously low interest rates. This is the primary reason why the debt disaster predicted by so many in the past has not arrived yet.

“Ultimately, the fundamentals show this country is bankrupt.”

So whether or not it happens right now, the truth is that at some point the credit rating of the U.S. government is going to go down and interest rates are going to go up.

Unfortunately, it appears that this might happen sooner rather than later.

Earlier this week, Moody’s Investors Service publicly announced that it would be reviewing our Aaa bond rating for a possible downgrade.

On Thursday, S&P actually went so far as to announce that there is a “50 percent chance” that it will downgrade the credit rating of the U.S. government within the next three months.

S&P has been warning of trouble for some time now.  Back on April 18th, Standard & Poor’s altered its outlook on U.S. government debt from “stable” to “negative” and warned that a downgrade was likely at some point soon if nothing changed.

If the credit rating of the U.S. government gets slashed and if that results in higher interest costs on the national debt, that is going to make it much harder to balance the budget.

Included in that spending is about 400 billion dollars that goes for interest on the national debt.

As I explained in a previous article, if our interest costs double or triple it is going to make it basically impossible to balance the budget under our current system.

If interest rates on U.S. government debt were to rise to moderate levels, we could soon be easily paying a trillion dollars a year just in interest on the national debt.

If interest rates on U.S. government debt were to rise to the levels that Greece, Portugal and Ireland are now facing, it would be beyond catastrophic.

But a reduced credit rating and higher interest rates would not just hurt the finances of the U.S. government.

Any financial institution that is linked to the U.S. government in any way would also probably be downgraded.

This fact was noted in the announcement put out by Moody’s this week….

In conjunction with this action, Moody’s has placed on review for possible downgrade the Aaa ratings of financial institutions directly linked to the government: Fannie Mae, Freddie Mac, the Federal Home Loan Banks, and the Federal Farm Credit Banks.

We have also placed on review for possible downgrade securities either guaranteed by, backed by collateral securities issued by, or otherwise directly linked to the government or the affected financial institutions.

Just think of the financial carnage that would cause.

Also, check out what one Bloomberg article had to say about the potential cascading effects of a credit rating downgrade for the U.S. government….

At least 7,000 top-rated municipal credits would have their ratings cut if the U.S. government loses its Aaa grade, Moody’s Investors Service said.

An “automatic” downgrade affecting $130 billion in municipal debt directly linked to the U.S. would occur if the federal level is reduced, Moody’s said yesterday in a report. Additionally, top-rated securities with no direct links to the national government will be reviewed for similar action.

But the nightmare would not end there.  The truth is that the credit ratings of large numbers of state and local governments from coast to coast would likely be reviewed and downgraded as well.  Right now, many state and local governments are scratching and clawing in a desperate attempt to survive financially, and a significant rise in interest costs would be enough to wipe many of them out.

The ripple effects of a U.S. government credit downgrade would be endless.

A lot of people argue that if the federal government ran a balanced budget from now on none of this would matter.

Unfortunately, that is not true.

At this point, a very high percentage of U.S. government debt is short-term debt.  That means that gigantic amounts of debt must be “rolled over” each year in addition to any new debt that we take on.  So even if interest rates rise significantly on just the existing debt that we have it is going to be a total nightmare.

And make no mistake, whether it happens now or later a collapse of U.S. government finances is coming.

“It’s inevitable that the U.S. will default—it’s essentially an empire which is overextended and in decline—and that its financial system will go with it”

Right now it is being projected that the U.S. national debt will hit 344% of GDP by the year 2050 if we continue on our current course.  We are on a runaway train that is heading straight for a brick wall.

Europe is also a complete financial wreck.  The sovereign debt crisis over in the EU continues to grow worse by the day and there is no end in sight.

We really are entering an unprecedented time in world history.   We are on the verge of the first truly global financial disaster.

In any event, the reality is that the current global financial system is not sustainable.  The folks that are in charge can try to keep things together for as long as possible, but at some point the dominoes are going to start to fall and the house of cards is going to crash.

The world has become incredibly unstable and the entire globe is going to be shaken.  Most people cannot even conceive of the kind of financial hell that is coming our way as a nation.

Yes, it can be a bit sad to think about what is happening, but it is much better to be armed with the truth than to be totally clueless and totally unprepared.