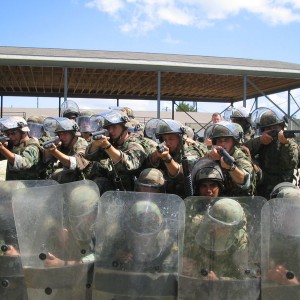 It may not happen this month, or even this year, but food stamp riots are coming to America.  In fact, we got a small preview of the coming food stamp riots this past weekend when a “temporary system failure” caused food stamp cards to stop working in 17 U.S. states.  Within hours, there were “mini-riots” at Wal-Marts and other retailers that rely heavily on food stamp users.  So what would happen if food stamp benefits were cut off or reduced for an extended period of time?  As you will see below, if Congress had not pushed through a “deal”, the USDA would have started cutting off food stamp benefits on November 1st.  Considering the fact that 47 million Americans are on food stamps and more than 100 million Americans are enrolled in at least one welfare program run by the federal government, that could have sparked massive rioting.  So the good news is that the coming food stamp riots will probably not happen in November.  The bad news is that the “deal” in Congress only delays the political fighting until after Christmas.  In just a few months we will be dealing with a potential “government shutdown” and a debt ceiling deadline once again.

Most Americans have no idea what almost just happened.  According to Reuters, the state of North Carolina had already cut off some welfare benefits for the month of November…

North Carolina has become the first state to cut off welfare benefits to poor residents in the wake of the partial federal government shutdown, ordering a halt to processing November applications until a deal is reached to end the federal standstill.

More than 20,000 people – most of them children – receive monthly benefits aimed at helping them buy food and other basic supplies through North Carolina’s welfare program, called Work First, which is fully funded by the federal government. Recipients must reapply each month.

And as Mac Slavo recently detailed, the USDA was already planning to cut off food stamp assistance to millions of Americans on November 1st…

We say next month because the USDA, which oversees the Supplemental Nutritional Assistance Program (SNAP), has just issued an order to SNAP agency directors calling for their respective States to implement an emergency contingency program because of government funding issues. In a letter obtained by the Crossroads Urban Center food pantry, the USDA is directing state agencies to, “delay their November issuance files and delay transmission to State Electronic Benefit Transfer (EBT) vendors until further notice.”

What this means is that should Congress fail to increase the debt ceiling this week, come November there will literally be millions of people in the United States who will have exactly zero dollars transferred to their EBT cards.

What will happen to the nearly 50 million people who depend on these benefits to survive?

In fact, there have been quite a few news reports that have confirmed this…

In Utah, Fox News 13 in Salt Lake City reported that a local provider recently received a letter from the USDA sticking to the November 1 cut-off date.

“This is going to create a huge hardship for the people we serve here in our food pantry,” Bill Tibbits, Associate Director at Crossroads Urban Center, told Fox News 13.

“What this means [is] if there’s not a deal, if Congress doesn’t reach a deal to get federal government back up and running, in Utah about 100,000 families won’t get food stamp benefit,” added Tibbits.

The USDA letter says in part, “in the interest of preserving maximum flexibility, we are directing states to hold their November issuance files and delay transmission to state electronic benefit transfer vendors until further notice.”

So what would have happened if tens of millions of Americans suddenly had their food stamp benefits cut off without warning?

Due to this technical glitch, many parents were left wondering how they were going to feed their families.  If this is the kind of anger that is unleashed over a single failed trip to the grocery store, what would we see if this kind of thing went on for an extended period of time?

At some Wal-Mart stores down in Louisiana, EBT cards were not showing any limits on Saturday night, and within two hours many store shelves in the grocery section were completely cleared of merchandise…

Shelves in Walmart stores in Springhill and Mansfield, LA were reportedly cleared Saturday night, when the stores allowed purchases on EBT cards even though they were not showing limits.

The chaos that followed ultimately required intervention from local police, and left behind numerous carts filled to overflowing, apparently abandoned when the glitch-spurred shopping frenzy ended.

Springhill Police Chief Will Lynd confirms they were called in to help the employees at Walmart because there were so many people clearing off the shelves. He says Walmart was so packed, “It was worse than any black Friday” that he’s ever seen.

Sadly, this was only a very small preview of the massive food stamp riots that are eventually coming to America.  I like how Mike Adams explained what we are likely to see in the future…

Why does any of this matter? Because this is exactly the same way these people will behave when the federal government goes into default and nearly 50 million EBT cards stop working nationwide.

Fifty million. Consider that for a moment. Most of those 50 million people live in high-density cities. Many are proud owners of Obama phones, Obama food stamps, Obama unemployment checks and Obama subsidized housing. They have absolutely no clue that the government upon which they wholly depend to put food on the table is teetering on the verge of permanent collapse. (Seriously, they cannot conceive of the idea of government “running out of money” because they do not understand where money comes from.) Because of this distorted belief, they do not prepare for any future events other than more Obama handouts. Their entire “preparedness” plan is to vote for Democrats, because that’s who they know will give them the most handouts. And they will always win the popular vote, too, because any politician promising to restore responsible fiscal spending to the government by cutting programs will be viciously accused of being “mean” or involved in “hating poor people.” So the government handouts will only ratchet higher and higher, ensnaring more and more people, until the entire system is unsustainable and collapses under its own weight.

When that system of dependence fails, those who depend on it will panic in mere hours. As proof of this, consider the fact that this mass looting of Wal-Mart stores happened in less than three hours after the Saturday EBT card glitch struck. Police had to be called in to prevent the situation from getting completely out of control, and it was offline for only part of one day.

Now imagine what will happen when EBT cards go offline for 24, 48 or even 72 hours. And imagine it happening in every U.S. city simultaneously.

Of course not all Americans would go wild when food stamp benefits are cut off.

Other Americans express their desperation in other ways.  According to Bloomberg, an increasing number of people are starting to sell hair, breast milk and their own eggs in a desperate attempt to make ends meet…

Hair, breast milk and eggs are doubling as automated teller machines for some cash-strapped Americans such as April Hare.

Out of work for more than two years and facing eviction from her home, Hare recalled Louisa May Alcott’s 19th-century novel and took to her computer.

“I was just trying to find ways to make money, and I remembered Jo from ‘Little Women,’ and she sold her hair,” the 35-year-old from Atlanta said. “I’ve always had lots of hair, but this is the first time I’ve actually had the idea to sell it because I’m in a really tight jam right now.”

The mother of two posted pictures of her 18-inch auburn mane on www.buyandsellhair.com, asking at least $1,000 and receiving responses within hours. Hare, who also considered selling her breast milk, joins others exploring unconventional ways to make ends meet as the four-year-old economic expansion struggles to invigorate the labor market and stimulate incomes.

In an attempt to keep order, the authorities will become increasingly forceful in the years ahead.  At this point, many law enforcement officers already believe that there is very little that they cannot do to exert their “authority” over the rest of us.  Just check out video of a drunk off-duty police officer “arresting” a woman that refused to go out on a date with him right here.  Sadly, this type of behavior is becoming way too common these days.

And it looks like major financial institutions are getting ready for the chaos that is eventually coming as well.  In fact, according to an article by Paul Joseph Watson, Chase Bank is now placing a limit on cash withdrawals and is banning business customers from sending wire transfers out of the country…

Chase Bank has moved to limit cash withdrawals while banning business customers from sending international wire transfers from November 17 onwards, prompting speculation that the bank is preparing for a looming financial crisis in the United States by imposing capital controls.

Numerous business customers with Chase BusinessSelect Checking and Chase BusinessClassic accounts have received letters over the past week informing them that cash activity (both deposits and withdrawals) will be limited to a $50,000 total per statement cycle from November 17 onwards.

Fortunately, the chaos that would have been unleashed if Congress had not made a deal has now been delayed for a few months.

If Republicans were to inexplicably prevail, and the federal government were to cut spending so that its expenditures matched its tax revenues (a truly radical idea) the country’s financial mess would be laid bare. The government would have to weigh the relative costs and benefits of making interest payments on Treasury debt (primarily to foreign creditors) or to trim entitlements promised to U.S. citizens. But those are choices we will have to make sooner or later anyway. In fact we should have dealt with these issues years ago. But generations of mechanistic debt ceiling increases have allowed us to perpetually kick the can down the road. What could possibly be gained by doing it again, particularly if it is done with no commitment to change course?

The Democrats’ argument that America needs to pay its bills is just hollow rhetoric. Paying off one’s Visa bill with a new and bigger MasterCard bill can’t be considered a legitimate payment of debt. At best it is a transfer. But in the government’s case, it doesn’t even qualify as that. Treasury debt is primarily bought by the Fed, foreign central banks, and major financial institutions. None of that will change with a debt ceiling increase. We will just go to the same people for greater quantities. So it’s like paying off your Visa card with a bigger Visa card.

We are living on borrowed time that has been purchased by stealing money from future generations.

We are literally destroying the future in order to make the present more palatable.

But whether it is this year, or next year or the year after that, at some point we are going to experience the pain that results from decades of incredibly foolish decisions.