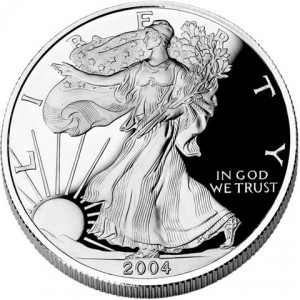 The day that silver traders have been waiting for has arrived.  On Wednesday, the price of silver dropped another 5 percent.  As I write this, it is sitting at $18.55 an ounce.  On Wednesday it hit a low that had not been seen in three years.  Overall, the price of silver has declined by 34 percent this quarter.  That is the largest quarterly move in the price of silver in more than 30 years.  So what does all of this mean?  It means that we are looking at a historic buying opportunity for those that are interested in silver.  Yes, gold is undervalued right now as well, but it is absolutely ridiculous how low the price of silver is.  At the moment, the price of gold is about 66 times higher than the price of silver is.  But they come out of the ground at about a 9 to 1 ratio, and unlike gold, silver is used up in thousands of common consumer products.  Those that want to invest in silver should be shouting for joy that prices have fallen this low.  If you have been waiting and waiting and waiting to “load the boat”, your moment has arrived.

In my previous articles, I have warned over and over again that we would see wild swings in the prices of gold and silver.  For example, I wrote the following back in April…

Investing in gold and silver is not for the faint of heart.  If you cannot handle the ride, you should sit on the sidelines.  We are entering a period of tremendous financial instability, and holding gold and silver is going to be like riding a roller coaster.  The ups and downs are going to shake a lot of people up, but the rewards are going to be great for those that stick with it the entire time.

Don’t be.  You will be just fine.  When the price of an ounce of silver hits 100 dollars an ounce you will be very thankful for the silver that you stored away at those prices.

We are moving into a time when we will see more volatility in precious metals prices than we have ever seen before.  That means there will be some tremendous opportunities to make money.  But in order to make money, you have to buy low and sell high.

For example, sales of silver coins by the U.S. Mint have set a brand new all-time record high during the first half of 2013.

This year, the U.S. Mint is on pace to sell 50 million ounces of silver for the entire year.

So don’t be alarmed that the price of silver is falling.

Instead, be very, very thankful.

Hopefully it will go even lower.

And you know what?  There is a decent possibility that the price of silver may go down a bit more.  This will especially be true during the initial stages of the next financial panic.

When the price of silver does dip, it is a perfect opportunity to load the boat, because even many mainstream analysts are projecting that the price of silver is headed into the stratosphere over the long-term.  For example, the following is what Citi analyst Tom Fitzpatrick told King World News the other day…

Again, if you look at silver going back to the 2008 correction, we got down to levels below $9, then we saw the silver price multiply by a factor of over 5 times. So assuming this marks a point near the end of the correction in silver, then our bias would be one that would take silver not only to new all-time highs, but we would look for a target as high as $100 for silver

A chart illustrating the projections that Fitzpatrick is making can be found right here.

There are so many reasons to own silver (even as opposed to owning gold).  The following is an excerpt from a recent article about silver that really caught my attention…

7. Silver is way below its nominal record price of $50 in 1980.  It is even further below the government inflation adjusted level of $135.  And if you use REAL inflation adjusted numbers, like Shadowstats, the REAL 1980 inflation adjusted price of silver would have to be $450!  Silver is a precious and depleting resource and when you look at the price of housing, cars, education, food, energy, taxes, insurance back in the 1980′s, it is insane to think that silver is so cheap on any level.  Especially when the uses of silver have skyrocketed since the 1980’s.  It is now used in technology on a massive scale and is even now said to cure cancer.  Heck, they did not even have Silver Eagle sales back then, or the Silver Bullet Silver Shield for that matter.

8. This time it is going to be much larger!  None of the problems from the 2008 Banking Crisis have been solved.  In fact it is orders of magnitudes worse.   What started out as an institutional  problem, is now a sovereign nation problem.  This collapse will not be a puny multi – billion dollar corporation like AIG disintegrating, it will be the Trillion dollar economies of the nations of the world and the Quadrillion dollar derivative monster markets cracking apart.  There is no financial, political or social safety net left.  We destroyed all of that in 2008 and are on a debt based junkie delusion.

The collapse of currencies will affect every counter-party, debt based asset in the world. Your cash, stocks, bonds, Real Estate, pensions, insurance, all of it.  The collapse of financial contracts will lead to the collapse of all political and social contracts.  The Anger Phase of humanity is coming and only real assets with no counter party risk will be worth anything.  Most commodities have storage or degradation issues leaving only precious metals as a real store of wealth.

10. The historical stockpiles of silver are destroyed.  We know implicitly that gold has been treasured and kept secure.  While silver has been used and abused as a cheap, industrial metal like tin.  Since the price of silver has been under attack since the Crime of 1873, silver has been used in such small quantities that it has been destroyed.  The US government in 1950 had 5 billion ounces of silver in its strategic stockpile, now it has ZERO. So if gold and silver come out of the ground at a 1:9 ratio and gold has been treasured and silver stockpiles destroyed, logic would dictate that the end of this silver bull market will find the gold to silver ratio BELOW 1:9 and I think it will come close to a 1:1.  Either way, we are a long way away from those levels which makes silver so exciting right now.

It is the destruction of huge stockpiles like this that explains the decade long supply deficit to the growing demand of silver.  Do not forget that we are only 7 years away from the United States Geological Survey’s prediction that if we continue to consume silver at these rates, silver would be the first metal to become extinct.  When I challenged the USGS on that statement, they said that only a massive revaluation of silver to bring on more production and wiser use of silver would stop the extinction.  I don’t think we will ever run out of silver, but I do believe that the free market will crush this paper manipulation and that anyone holding physical silver on that day will then have a lottery ticket in real value.

You can read the rest of that excellent article right here.

Do you want some more reasons to own silver?

The amount of silver consumed annually and bought for investment exceeds currently exceeds total annual mining output and has for years. That gap has been filled by sellers willing to sell from existing inventories and as prices rise. As time passes this will naturally push prices significantly higher until this fundamental imbalance reaches a true equilibrium price where supply is closer to demand.

Both industrial and investment demand for silver is growing in excess of the annual increase in mining production growth. The available inventory is low and will get even tighter over time. These two factors will lead to a continued tighter supply-demand situation going forward.

Silver is an industrial metal with over 10,000 commercial applications. Because it is one of the best electrical and thermal conductors, that makes it ideal for electrical uses such as switches, multi-layer ceramic capacitors, conductive adhesives, and contacts. It is used in some brazing and soldering as well. Silver is also used in solar cells, heated automobile wind shields, DVD’s and some mirrors.

Silver is an essential element in the electronic gadgets that are a growing part of our digital age. It is in every cell phone, smart phone, tablet, computer keyboard, solar cells and every radio frequency if ID device (RFID). This makes it an essential element going forward as the world becomes more addicted to gadgets. The growth and rising living standards of people in the emerging economies will drive long-term growth of new customers that will demand more and more electronic gadgets.

Of a total of fifty billion ounces of silver that have been mined in history, only two ounces (estimate) or 5% remain in above ground inventories available to be bought and sold. This is due to silver being used up in industrial applications in very small quantities, which makes it unprofitable to recycle at today’s prices. A lot of silver is used in minute quantities in industrial products which are used up and discarded without being recycled.

The total amount of silver available to trade in the physical silver market is only about $70 billion versus the total gold market which now exceeds $4.3 trillion. As you can see from these numbers, the total market size of the silver market is only 1.6% of the size of the entire gold market. This lack of liquidity and use of extreme leverage in its respective futures market produces wild volatility in price fluctuations of silver.

Let us hope that the price of silver stays below 20 dollars an ounce for as long as possible, because once this opportunity is gone we will probably never see it again.

It is important to realize where we are in the greater scheme of things.  The world is moving toward another major financial crisis which will usher in a brief period of deflation.  Unlike many others that are talking about the coming economic collapse, I have always maintained that we are going to see deflation first and then the response to the crisis will give us the rip-roaring inflation that so many talk about.  The following is an excerpt from one of my articles where I talk about this…

During the initial stages of the next major stock market crash, gold and silver will not do very well.  But that is okay.  Dips are buying opportunities.

As the coming economic crisis unfolds, governments and central banks all over the world will desperately attempt to resuscitate the global financial system.  We are going to see money printing and “stimulus packages” on a scale that we have never seen before.  Crazy things will happen with stocks, bonds and currencies.

When the dust finally settles, those that are holding “real money” will be the ones that will be in the best shape.