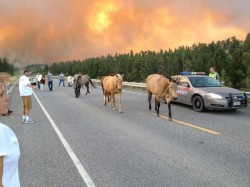 As America watches large sections of Colorado literally burn to the ground, many are wondering why all of this is happening.  There have always been wildfires, but what we are experiencing now seems very unusual.  So is the number of wildfires in the United States increasing?  As you will see later in this article, the answer is yes.  2011 was a record setting year for wildfires and this wildfire season is off to a very frightening start.  Right now the eyes of the nation are focused on the Waldo Canyon Fire in Colorado.  It doubled in size overnight and it has consumed more than 300 homes so far.  It is threatening the city of Colorado Springs, and at this point more than 35,000 people have been forced to evacuate – including the U.S. Air Force Academy.  On Twitter and Facebook residents are describing what they are seeing as “the apocalypse” and as “the end of the world”.  But this is just the beginning of the wildfire season.  We haven’t even gotten to July and August yet.

The Waldo Canyon fire is rapidly becoming one of the most expensive and destructive wildfires in Colorado history.  The historic Flying W Ranch has already been burned totally to the ground by this fire.  Local authorities are struggling to find the words to describe how nightmarish this fire is.  The following are a couple of quotes from a CNN article….

Richard Brown, the Colorado Springs fire chief, described it as a “firestorm of epic proportions.”

“There were people’s homes burned to the ground. It was surreal,” he said late Tuesday night. “There’s no question, it’s serious. It’s as serious as it gets.”

But this is not the only wildfire that is raging in Colorado.  Right now there are 10 wildfires burning in the state.  Overall, there are 33 large wildfires currently burning in twelve U.S. states.

If you will remember, New Mexico just experienced one of the worst wildfires that it has ever seen.  Conditions throughout most of the western United States are ideal for wildfires right now.  As USA Today reports, much of the western half of the country is under a “red flag warning” right now….

Throughout the interior West, firefighters have toiled for days in searing, record-setting heat against fires fueled by prolonged drought. Most, if not all, of Utah, Colorado, Wyoming and Montana were under red flag warnings, meaning extreme fire danger.

But wait, didn’t this kind of thing happen last year too?

In fact, 2011 was one of the worst years ever for wildfires in America.  The following is a short excerpt from an EarthSky article….

Thousands of wildfires raged across the United States last year, 2011, burning a record amount of land, especially in the southern U.S. In fact, 2011 the third-most-active fire season since 1960 (when this record-keeping began) with respect to acres burned, according to preliminary data released from the National Interagency Fire Center (NIFC) in late December 2011. The NIFC will be releasing an official summary report detailing the 2011 wildfire season later in 2012, but for now you can read some of the details in the State of the Climate Wildfires 2011 report from NOAA.

We have seen highly unusual wildfire activity throughout America in recent years.  In the article quoted above you can find a chart which shows that wildfire activity in the United States has been far above normal during the past decade.

Wildfire records have only been kept since 1960.  The 6 worst years on record for wildfires in the U.S. have all happened since the year 2000.  The following is from an Earth Island Journal article that I found….

In the United States, where some of the most accurate wildfire statistics are kept, the six worst fire seasons in the past 50 years have occurred since 2000. In Texas, nearly 4 million acres were burned in 2011, double the previous record. This included the Bastrop Fire last September that destroyed 1,600 homes and became the most destructive fire in Texas history. In Arizona more than one million acres were burned in 2011, a new record. The Wallow Fire, which destroyed nearly a half million acres, was the largest fire in Arizona history. The Pagami Creek Fire in northern Minnesota became the third largest fire in state history when it burned 100,000 acres in September 2011, most of this in an unprecedented 16-mile run on a single day.

It means that the number of wildfires in the United States is increasing and wildfires are becoming more powerful and doing more damage.

The truth is that this is happening because we are seeing exceptionally dry conditions throughout the western half of the United States.  In fact, according to the U.S. National Academy of Sciences, the U.S. interior west is now the driest that it has been in 500 years.

The eastern half of the country also gets very hot during the summer, but they don’t have as many wildfires because they get a lot more rain.

Many areas in the western half of the country have been experiencing drought conditions for quite a few years, and there seems to be no end in sight for the drought.

If you go check out the U.S. drought monitor, you will see that almost the entire southwest United States is experiencing some level of drought right now.

So what will July and August bring?

It is kind of frightening to think about that.

Earlier this year I wrote an article that postulated that we could actually see dust bowl conditions return to the middle of the United States.  Many readers were skeptical of that article.

But as much of the western United States continues to experience bone dry conditions and continues to be ravaged by wildfires, perhaps more people will understand how bad things are really getting in the interior west.

Just because we have made great technological advances as a society does not mean that we know how to tame nature.  We can attempt to contain the massive wildfires that are popping up all over the place and we can attempt to deal with the drought, but in the end we cannot stop what is happening.

So do you live in any of the areas that are being affected by these wildfires?

Do you have an opinion about why so much of America is on fire? 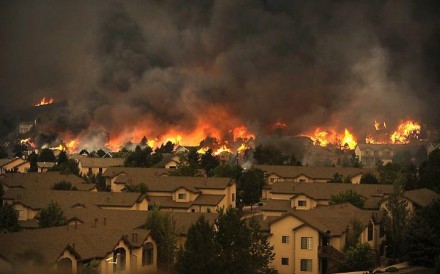