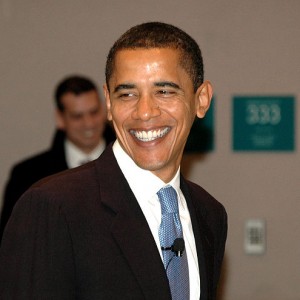 For years, the Obama administration has been making it abundantly clear that it is a friend of illegal immigrants.  Border security is a joke, the federal government refuses to go after “sanctuary cities” even though they are breaking federal law, there is a website that instructs immigrants how to sign up for welfare programs once they arrive in the United States, and the Obama administration has distributed flyers that tell illegal immigrants that their immigration status will not be checked when they apply for food stamps.  And Obama has even instructed officials to use “prosecutorial discretion” in deportation cases involving non-criminals.  In other words, Obama has been flashing a huge green light to illegal immigrants, and so of course our borders were going to be inundated with them.

Apologists for the Obama administration will debate you all day about what Obama “intended” and what he didn’t “intend”, but there is no doubt about what message immigrants from Central America have been receiving.

For example, one young mother recently told the press that she heard that if you “go to America with your child, you won’t be turned away“.

And you can view video of a little boy from Central America telling an investigate reporter that he believes that Barack Obama has “given permission” for him to live in the United States right here.

It isn’t an accident that our southern border is literally being flooded with illegal immigrants right now.  Newspapers in El Salvador and Honduras have been publicizing how easy illegal immigration has become, and even the President of Honduras has said that people are coming to the United States for “Obama’s amnesty”.

What we are witnessing down on the southern border is really unprecedented.  It has been estimated that twelve times as many kids are crossing our borders illegally now compared to just a few years ago.

And they just keep on coming.

Now, please don’t think that I am anti-immigrant.  I am all for legal immigration.  This is a nation of immigrants and we will always need immigration.  But everyone should be required to come in through the front door.  Encouraging illegal immigration is simply a recipe for disaster.

If we keep the back door wide open, the truth is that we have absolutely no idea who is coming into our country.  Do we really want countless numbers of criminals, welfare parasites, drug dealers and gang members pouring into our cities?  According to the FBI, there are now approximately 1.4 million gang members living in the United States, and it has been estimated that illegal immigrants make up approximately 30 percent of the total population in federal, state and local prisons.

And why in the world would we not want to control the diseases coming into this country?  Over the past several weeks, it has been documented that some of the illegal immigrants that have been apprehended have scabies and tuberculosis.

But instead of sending them right back out of the country, U.S. officials are setting up camps for this tsunami of illegal immigrants.  In other cases, the federal government is simply putting them on buses and planes and shipping them all over the country.  The illegal immigrants are released into their new communities and are given papers which order them to eventually appear in court, but of course the vast majority of them never show up.  You can see a map that documents areas where the federal government has been shipping illegal immigrants right here.

The rational thing to do would be to secure our borders and to send a very clear message that illegal immigration is not welcome in the United States.

But instead of doing that, the Obama administration is actually bringing in a riot squad to deal with anti-immigration protesters.

During normal times all of this would be crazy enough, but right now we are at a point where we cannot even take care of millions upon millions of our own citizens.

We are told that illegal immigrants do the jobs “that Americans don’t want to do”, but is that really accurate?

In this day and age, there is intense competition for just about any kind of a job.  Despite what the mainstream media says, the truth is that there hasn’t been a significant employment recovery in the United States.  As you can see from the chart posted below, the percentage of the working age population that is actually working is still far, far below where it was just prior to the last recession… 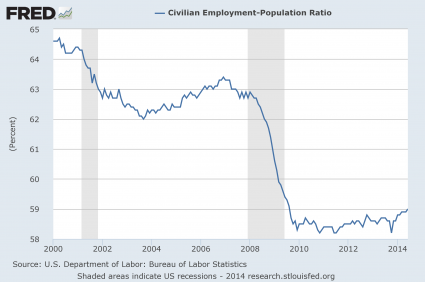 Yes, there has been a very slight bump in the numbers in recent months, but it is certainly no reason for celebration.  When the mainstream media declares that unemployment in America has been steadily going down, they are simply being disingenuous.  Right now things are only slightly better than they were during the worst times of the past several years.

And according to shadowstats.com, the broadest measure of unemployment is still well over 20 percent and has been steadily rising since the end of the last recession.

So no, there aren’t nearly enough jobs in the United States.

And thanks to competition from immigrant labor and thanks to the fact that millions of good jobs have been shipped overseas, the quality of our jobs continues to decline as well.  For much more on that trend, please see this article.

Needless to say, now is not the time to open up the floodgates to millions of immigrants that will need jobs to support themselves.  Many of our major cities are already so economically depressed that they look like war zones.  In fact, things have gotten so bad in Detroit that a plan is being considered to bulldoze a fifth of the entire city…

In May, a group ominously titled the “Detroit Blight Removal Task Force” released a report claiming that around 22 percent of the city’s properties were “blighted” – vacant, damaged or considered dangerous. They also found that, of the 84,000 properties owned by public entities, just over 5,000 were occupied by squatters, making the city of Detroit, the report’s authors noted, “a very large and inadvertent landlord”.

The task force’s proposed solution is to demolish it all over the next five years and start again. Unfortunately, the plan doesn’t extend to rebuilding the properties – it’ll be down to private companies and developers to buy up the land and rebuild.

For much more on the decay of our major cities, please see my previous article entitled “The Death Of The Rust Belt“.

Considering the fact that we are already having such a severe problem taking care of our current population, what do you think is going to happen to these waves of illegal immigrants as they attempt to settle in to communities all around the nation?

Ultimately, we are going to have to end up financially supporting a very large percentage of them too.

Right now, more than 20 percent of children in this country are already living in poverty, and 49 million Americans are dealing with food insecurity.

If Obama continues to encourage mass illegal immigration, those numbers are going to get much worse.

Government dependence is already at an all-time record high, and about half the country currently receives benefits of some sort from the federal government every month.

How much more weight can we put on the “safety net” before it breaks?  Just check out some more numbers about this crisis from one of my previous articles…

–The U.S. government has spent an astounding 3.7 trillion dollars on welfare programs over the past five years.

–Today, the federal government runs about 80 different “means-tested welfare programs”, and almost all of those programs have experienced substantial growth in recent years.

–While Barack Obama has been in the White House, the total number of Americans on food stamps has gone from 32 million to nearly 47 million.

–It sounds crazy, but the number of Americans on food stamps now exceeds the entire population of the nation of Spain.

–According to a report from the Center for Immigration Studies, 43 percent of all immigrants that have been in the United States for at least 20 years are still on welfare.

A lot of people that are trying to immigrate here illegally just want to make a better life for themselves, and I can appreciate that.

But a policy of making it incredibly difficult for honest people to come in through the front door while keeping the back door completely wide open for lawbreakers is a recipe for national suicide.

And right now we don’t have jobs for these immigrants.

We can’t even take care of the people that are already living here.

Something desperately needs to be done about this, but I wouldn’t hold your breath waiting for Obama to make a bold move to stop illegal immigrants from pouring over the border.