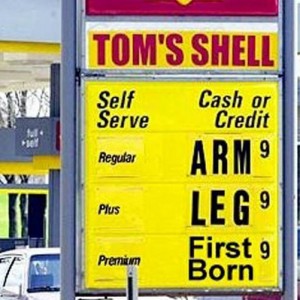 Gas prices are on the rise again.  In many areas of the U.S. gas prices are already hovering around $3.00 a gallon.  In fact there are some areas where people are paying as much as $3.50 a gallon, and many experts are predicting that gasoline could hit $4.00 a gallon by the end of 2010.  If this nonsense keeps up, how in the world is the average American family supposed to make ends meet?  Not only is filling up our tanks going to cost a lot more, but the price of gasoline factors into so many other things.  The U.S. economy just cannot handle a major increase in transportation costs at this point.  These increasing gasoline prices come at a time when U.S. consumers are already stretched to the max.

But it isn’t just gasoline prices that are going up.  The price of food is really starting to rise as well.  Rising demand and reduced supply drove supermarket prices for 16 basic foods up 6.2% in the first quarter of 2010.

Now, for those Americans who are independently wealthy, a large increase in gasoline and food prices might not mean much.

But for the rest of us who are trying to get our incomes to stretch as far as possible each month, it means a whole lot.

In fact, a record number of working Americans are finding that their paychecks are just not making it and are turning to government assistance programs such as food stamps just to make it.

According to the U.S. Department of Agriculture, approximately 39.4 million Americans, a new all-time record, received food stamps in January.  This was up 22% from a year earlier.  In fact, the number of Americans on food stamps has hit all-time records for 14 consecutive months.

New all-time records for 14 months in a row?

How in the world can anyone claim that the U.S. economy is in good shape?

And it is just not people who are out of work or who are lazy who are applying for food stamps.  The truth is that a lot of hard working Americans who are doing everything they can to better themselves find themselves out of alternatives these days.

Some of those hard working Americans are readers of this site.  One of them recently left a comment that is very timely….

There are people on food stamps now, that you would never think they were. For example myself, I just went on food stamps last month. I am not a welfare mom, unemployed or declaring bankruptcy, I am educated and working as hard as I can to make ends meet.

I hold a Masters degree, and a part time job. I make minimum wage and if I were scheduled 40 hours a week my pay would just cover my expenses. Problem is, with retail the number of hours changes from week to week, and it hasn’t been near 40 since Christmas. Luckily I planned ahead and put money aside if I couldn’t find a job right out of school, or if I found one and lost it with today’s economy. I have been able to cover the bills my paycheck doesn’t, but the thing is, my savings has gotten low to that.

I honestly really didn’t want to go on food stamps, I just can’t find another job. Let that be a full time position, or even another part time one. I’m applying to everything I’m qualified for, remotely qualified for, and even over qualified for. But there really are that few of jobs out there.

I haven’t really told anyone I’m on food stamps, a good portion of my old friends are still in school and don’t understand why I can’t find a “real” job. Luckily at my new job there’s a whole store of people who know exactly what I’m going through and would never think of judging me for how much I make or where I live.

There are other people too. Once at work a mother with three kids came in, she had never used food stamps before and had no idea what to do at the register. She almost came to tears trying to explain she really didn’t want to use them, but her husband lost his job, and all that was left for the family was her part time job, and she was so ashamed they had them.

People really have no idea how many of their neighbors are on food stamps.

Millions of Americans have done everything that the system has told them to do, and now the system is letting them down.

Because the system is failing.

The middle class is slowly being squeezed out of existence, and the years ahead are going to be very painful.

Already, it is getting extremely hard to live a middle class lifestyle.

If you haven’t read “It’s Impossible to Get By In the US” by Graham Summers of Phoenix Capital Research, you really need to.  In his article, Summers analyzes the expenses of a typical family making the median U.S. household income of $50,300 (he was using 2008 figures).  According to Summers, if a family making that much did everything right financially, they would maybe have a couple hundred bucks at the end of the month for discretionary spending.  But if they overpaid for their house or had any consumer debt then according to his calculations the typical American family would be operating in the red.

The truth is that the day is fast approaching when it will not be possible for the average American family to make it from month to month.

Even now record numbers of American families are failing financially.

Things are getting scary out there.

But if all of that wasn’t bad enough, now state and local governments across the United States are either implementing or are considering substantial tax increases.  State and local governments all over the U.S. are facing unprecedented shortfalls, and they are looking for new sources of revenue.  But you just can’t get blood out of a stone.  Unfortunately, they are likely to keep finding ways to impose new taxes on us anyway.

The United States is heading for a complete economic collapse and everyone is going to feel the pain one way or another.

Just make sure that you and your family are as prepared as possible for the years ahead.

“The way to crush the bourgeoisie is to grind them between the millstones of taxation and inflation.”