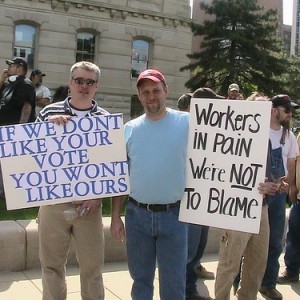 With the unprecedented spending by the U.S. government over the past year and a half, shouldn’t we at least see some jobs being produced by now? After all, if we are putting our children and grandchildren into perpetual debt from which they will never emerge, shouldn’t we at least be able to put American workers back to work? Unfortunately, as you will see from the charts in this article, that is most definitely not the case. In fact, unemployment is reaching levels in the U.S. that have not been seen for decades. The high paying manufacturing and construction jobs that were the bedrock for the American middle class for decades have disappeared and they are simply not coming back.

Despite the reckless spending of the U.S. government, the U.S. economy continues to bleed jobs month after month.  In fact, December was the worst month for U.S. unemployment since the “Great Recession” began.  The U.S. labor force contracted by 661,000 in December.  The number that actually “lost” their jobs in December was much smaller than this.  The 661,000 number includes thousands upon thousands of American workers that have given up on employment and have simply dropped out of the system. The broader U6 measure of unemployment in the United States rose to 17.3 percent in December.  That is staggering.

In fact, the civilian participation rate in the employment pool has nosedived and has now reached levels not seen since the recession of the early 80s…..

But not only have millions of people lost their jobs, they also can’t find jobs once they start looking for work.  The average duration of unemployment is already at record levels and it is shooting through the roof….

It is really easy to tell someone to “go get a job”, but in many areas of the United States there simply are NO jobs.

In fact, there have been reports of people literally getting down on their knees and begging for a job at a city dump in Florida.  In other areas of the U.S., hundreds of people line up to apply for fast food jobs.

Without jobs or even the hope for a job, many families are now existing on the edge of survival.  Millions of men and women would be more than willing to work if something was available.

But nothing is available.

All of their jobs have been shipped off to Mexico, China and India.

For the last several decades the politicians in Washington D.C. have sold out U.S. workers and have sold out the U.S. economy and now the day of reckoning is here.

Unfortunately, as is too often the case, it is the working man that is feeling the pain first.

But eventually we will all feel the economic pain.

The great American economic empire is crumbling and the fall will be very great.

The economic despair that is coming in the years ahead is going to be so great that there are no words to even describe it.