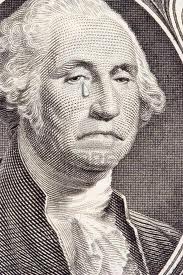 Did you know that the U.S. national debt has increased by more than a trillion dollars in just over 12 months?  On September 30th, 2012 the U.S. national debt was sitting at $16,066,241,407,385.89.  Today, it is up to $17,075,590,107,963.57.  These numbers come directly from official U.S. government websites and can easily be verified.  For a long time the national debt was stuck at just less than 16.7 trillion dollars because of the debt ceiling fight, but now that the debt ceiling crisis has been delayed for a few months the national debt is soaring once again.  In fact, just one day after the deal in Congress was reached, the U.S. national debt rose by an astounding 328 billion dollars.  In the blink of an eye we shattered the 17 trillion dollar mark with no end in sight.  We are stealing about $100,000,000 from our children and our grandchildren every single hour of every single day.  This goes on 24 hours a day, month after month, year after year without any interruption.

Over the past five years, the U.S. government has been on the greatest debt binge in history.  Unfortunately, most Americans don’t realize just how bad things have gotten because the true budget deficit numbers are not reported on the news.  The following is where the U.S. national debt has been on September 30th during the five years previous to this one…

The U.S. national debt is now 37 times larger than it was 40 years ago, and we are on pace to accumulate more new debt under the 8 years of the Obama administration than we did under all of the other presidents in U.S. history combined.

Of course all of the blame can’t be placed at the feet of Obama.  During the last two elections the American people have given the Republicans a solid majority in the U.S. House of Representatives, and the government cannot spent a single penny without their approval.

Unfortunately, House Speaker John Boehner and the Republicans that are allied with him have repeatedly turned their backs on the people that gave the Republicans the majority and they have authorized trillions of dollars of new debt which will be passed on to future generations of Americans…

Since John Boehner became speaker of the U.S. House of Representatives on Jan. 5, 2011, the debt of the federal government has increased by $3,064,063,380,067.72. That is more than the total federal debt accumulated in the first 200 years of the U.S. Congress–during the terms of the first 48 speakers of the House.

In fact, if all of that debt had been given directly to the American people, every household in America would have been able to buy a new truck…

The $26,722 in new debt per household accumulated under Speaker Boehner would have been more than enough to buy every household in the United States a minivan or pickup truck–or to pay three years of in-state tuition (not counting room and board) at the typical state college.

Sometimes we forget just how much money a trillion dollars is.  In a previous article, I included some illustrations that I believe are helpful…

-If you were alive when Jesus Christ was born and you spent one million dollars every single day since that point, you still would not have spent one trillion dollars by now.

-If right this moment you went out and started spending one dollar every single second, it would take you more than 31,000 years to spend one trillion dollars.

We are doing the exact same thing that Greece did, only on a much larger scale.  What we are doing is not even close to sustainable, and it will inevitably end very, very badly.  The following is what Michael Pento, the president of Pento Portfolio Strategies, told RT the other day…

The U.S. debt situation is so bad that even the Prime Minister of Cyprus is scolding us…

“The U.S. has been fortunate in the sense that it’s like a bank, it prints the money that other people accept. So you can live beyond your means over an extended period of time without being punished by the market.”

Unfortunately, we will not be able to live way beyond our means forever.  Reality is going to catch up with us at some point.

Right now, the rest of the world is lending us giant mountains of money at interest rates that are far below the real rate of inflation.  This is extremely irrational behavior, and this state of affairs will probably not last too much longer.

But if interest rates go up, it will absolutely cripple the U.S. economy.  For much more on this, please see this article.

And what would make things much, much worse is if the rest of the globe starts moving away from using the U.S. dollar.  At the moment, the U.S. dollar is the de facto reserve currency of the planet and this creates a tremendous demand for U.S. dollars and U.S. debt.

If that changes, it will be absolutely catastrophic for the United States, and unfortunately there are already lots of signs that this is already starting to happen.  I wrote about this in my recent article entitled “9 Signs That China Is Making A Move Against The U.S. Dollar“.

But don’t just take my word for it.  Just a couple of days ago a major U.K. newspaper came to the same conclusions…

China has overtaken the US as the world’s largest oil importer and goods trading nation. Over the next five years, it will surpass the rest of the world combined in its consumption of base metals.

Given the scale of the country’s consumption of fossil fuels and raw materials, it is only a matter of time before the renminbi replaces the dollar as the primary currency for trading commodities and resources such as crude oil and iron ore.

The debt ceiling farce in Washington and China’s growing reluctance to continue underwriting the US economy by buying up its bonds and adding to America’s near $17 trillion (£10.5 trillion) debt mountain suggests that this tectonic shift in the global trade system could be just around the corner.

So what will happen when the rest of the world decides that they don’t need to use our dollars or buy our debt any longer?

At that point the consequences of decades of incredibly foolish decisions will result in an avalanche of economic pain that the American people are not prepared for.

Earlier today, I came across a photograph that perfectly captures what America is heading for.  The following photo of Mt. Rushmore crying has not been photoshopped.  It was taken by Megan Ahrens and it was posted on the Tea Party Command Center.  If George Washington was alive today, this is probably exactly how he would feel about the nation that he helped establish… 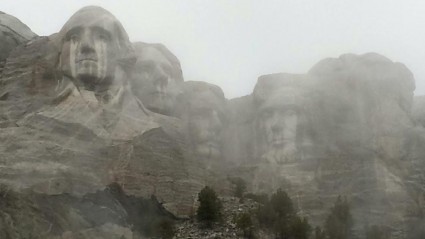