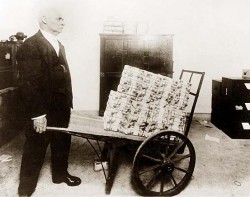 Selling government debt is a gigantic confidence game.  For decades, investors all over the globe have gobbled up massive amounts of U.S. debt at incredibly low interest rates because they believed that it was a certainly that they would be paid back and be able to make a little bit of profit on top of it.  Unfortunately, things have changed.  Confidence is U.S. Treasuries is dying, and if confidence in U.S. government debt completely collapses at some point we could literally be looking at financial Armageddon.  Why is that so?  Well, when the world totally loses faith in U.S. Treasuries, interest rates on U.S. Treasuries will have to keep going up until enough investors are found to buy them.  But much higher interest rates will mean much higher interest on the national debt and thus much higher federal budget deficits.  That will erode confidence in U.S. Treasuries even further.  In the end, a vicious cycle of eroding confidence and higher interest rates could ultimately lead to hyperinflation as the U.S. government and the Federal Reserve flood the system with endless amounts of paper money to try to keep the system solvent.

Faith in U.S. Treasury bonds is absolutely critical if the world financial system is going to continue to operate in a stable manner.  In the post-World War 2 era, U.S. Treasuries have been largely viewed as the absolutely safest investment out there.  So if there comes a point when the market for U.S. Treasuries completely collapses, it is going to cause unprecedented financial chaos.  The worldwide derivatives market, which is already highly unstable, would almost certainly implode.  Credit markets all over the globe would seize up.  Global trade would quickly grind to a standstill.

This isn’t going to happen overnight (hopefully).  Rather, the loss of confidence in U.S. Treasuries is something that is likely to take months or even years to play out.  But once that confidence is gone, it is not something that will be able to be rebuilt easily.

Think of it this way – once you drive a car off a cliff, is it easy to reconstruct it?

Well, that is where we are headed with U.S. Treasuries.

The Federal Reserve is flooding the system with new dollars, Barack Obama and the U.S. Congress seem poised to pass a new tax deal which does not include corresponding spending cuts which will cause U.S. government budget deficits to become even more bloated, and there is a tremendous lack of faith both in U.S. political leaders and in the Federal Reserve at this point.

The rest of the world is losing faith that the U.S. government is going to be able to handle all of the debt that it has accumulated.  We may be approaching a “tipping point” soon.

The following are 10 signs that confidence in U.S. Treasuries is dying….

#1 The financial community is extremely concerned that the tax deal that Barack Obama is pushing is going to dramatically increase U.S. government budget deficits over the next two years.  On Monday, Moody’s warned that if Barack Obama’s tax deal with the Republicans becomes law, it will increase the likelihood that Moody’s could soon be forced to slash the rating of U.S. government debt.

#2 Already there are signs that some bond investors are looking for the exits.  Last week, U.S. Treasuries suffered their largest  two day sell-off since the collapse of Lehman Brothers back in September 2008.

#3 The yield on 10-year Treasury bonds set a six-month high on Monday before pulling back a bit.  Most analysts believe that Treasury yields are going to push significantly higher in coming weeks.

#4 This trend of rising yields has been going on for a while.  In fact, yields on 10-year Treasury bonds have been steadily rising since October 7th.

#7 The American people have less faith in the Federal Reserve and in the financial system than at any other point in recent memory.  For example, a new Bloomberg National Poll has found that a majority of Americans now want the Federal Reserve to either be held more accountable or to be abolished entirely.

#8 Investors all over the globe are starting to wake up and realize that America’s debt problem is unsolvable.  David Bloom, the currency chief at HSBC, raised eyebrows when he recently stated that “if yields are rising because people think America’s fiscal situation is unsustainable, then its Armaggedon.”

#9 There is also a growing feeling among investors that the Federal Reserve simply does not care about the danger of inflation, and this is making bondholders very nervous.  Stephen Lewis of Monument Securities recently put it this way….

“There is a feeling that the Fed doesn’t care about inflation – in fact, wants more of it – and that is certainly not in the interest of bondholders.“

For years our politicians have told us that “deficits don’t matter”, but the truth is that they do matter.  The national debt of the United States is now the biggest debt in the history of the world by far, and yet most Americans do not seem to grasp the absolute financial horror that we are facing as a nation.

In the end, debt is always painful.  It can be a lot of fun to run out and buy a beautiful new house, a couple of brand new cars and to run your credit cards up to the max, but eventually it catches up with you.  Well, the same thing is now happening to us on a national level.

We are getting to the point where eventually we are not even going to be able to service the debt that we have already piled up.  Once that happens we can either declare national bankruptcy or we can try to hyperinflate our way out of trouble.

Meanwhile, the once great U.S. economic machine is dying as well.  The only reason we have been able to survive with all of this debt as long as we have is because of how powerful our economy has been.

But over the past couple of decades, the big global corporations that now dominate our economy have shipped thousands of factories and millions of jobs overseas.

The mighty economic machine which is supposed to provide funds to pay off all of this debt is being dismantled right in front of our eyes.

But now that the “real economy” is dying a savage death there is simply no hope that this thing is ever going to turn around.  The only thing left to do is to take bets on when the implosion is going to happen.

All of this “great tax cut debate” nonsense going on in Washington D.C. right now is just a bunch of incompetent politicians running around rearranging the deck chairs on the Titanic.  Perhaps these tax cuts will provide enough of a short-term economic boost to get many of them re-elected in 2012.  Meanwhile, our long-term economic problems continue to get a lot worse.

It has become quite obvious that Barack Obama is completely clueless about the economy, and what is even sadder is that the “highly educated” Chairman of the Federal Reserve, Ben Bernanke, seems almost equally as clueless.

Unfortunately, Americans have become so dumbed-down that they don’t even realize that their leaders are incompetent.  In fact, as sad as it is to say, most Americans you will meet on the street probably cannot even tell you what U.S. Treasuries are.

Let us hope and pray that investors around the globe continue to have at least some confidence in U.S. Treasuries for at least a little while longer.  When “financial Armageddon” finally does happen, it isn’t going to be pleasant for any of us.

So enjoy these happy economic times while you still have them, because at some point things are going to get a whole lot worse.