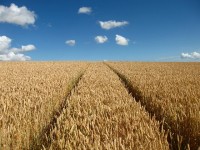 The world food situation is starting to get very, very tight.  Unprecedented heat and wildfires this summer in Russia and horrific flooding in Pakistan and China have been some of the primary reasons for the rapidly rising food prices we are now seeing around the globe.  In places such as Australia and the African nation of Guinea-Bissau, the big problem for crops has been locusts.  In a world that already does not grow enough food for everyone (thanks to the greed of the elite), any disruption in food production can cause a major, major problem.  Tonight, thousands of people around the world will starve to death.  So what happens if things get even worse?  Many agricultural scientists are now warning that global food production is facing dangers that are absolutely unprecedented.  Crop diseases such as UG99 wheat rust and the “unintended effects” of genetic modification pose challenges that previous generations simply did not have to face.  The outbreak of a real, live global famine looks increasingly possible with each passing year.  So are you and your family prepared if a global famine does strike?

Already, there are huge warning signs on the horizon.  Just check out what agricultural commodities have been doing.  They have been absolutely soaring.

A recent article on the Forbes website noted a few of the agricultural commodities that have skyrocketed during this year….

Are you ready to pay 84 percent more for a loaf of bread?

You better get ready – these raw material prices will filter down to U.S. consumers eventually.

So what is going to happen if the world food situation gets even tighter?

The following are 5 potential dangers to global crops that could dramatically reduce the world food supply….

UG99 is commonly known as “wheat rust” or “stem rust” because it produces reddish-brown flakes on wheat stalks.  The International Maize and Wheat Improvement Center in Mexico believes that approximately 19 percent of the global wheat crop is in imminent danger of being infected with UG99.

Ultimately, it is estimated that about 80 percent of the wheat on the globe is capable of catching the disease.

There is no known cure.

This current strain of wheat rust was discovered in Uganda in 1999 and has spread into areas of Kenya, Sudan, Ethiopia, Yemen and Iran.  It is feared that this crippling disease will spread even farther into south Asia, devastating the fertile growing regions of Afghanistan, Pakistan, India and Bangladesh.

If that happens, you might as well kiss world food stability goodbye.

A recent article in the Financial Times contained an absolutely stunning quote from one prominent agricultural scientist….

“You can talk about crying wolf,” says Ronnie Coffman, director of the Durable Rust Resistance in Wheat project at the University of Cornell in the US, “but it is a wolf”, he asserts, driving across the corn fields of Kansas.

Later on in the same article, Coffman warns that this disease could cause a devastating famine in which literally millions of people would die….

“It can be absolutely devastating if environmental conditions are right,“ he says. “You can count the number of people who could die from this in the millions.”

Mad Soy disease is spreading at an alarming rate among soy farms down in Brazil.  Previously the disease had been confined to the north part of the country, but now it has been increasingly spreading south.  This disease retards the maturation of infected plants, and it has been causing yield losses of up to 40 percent.  The USDA says that “there are no known effective treatments.”

Verticillium Wilt is a fungus that prevents lettuce from absorbing water, causing it to quickly grow yellow and eventually wilt.  This dangerous fungus is very hard to get rid of totally because it can stay in the soil for up to seven years.

Today, Verticillium Wilt is spreading all over Monterey County, California.  Considering the fact that Monterey County produces more than 60 percent of the lettuce in the United States, that is very bad news.

In 2009, a disease known as “late blight” attacked potato and tomato plants in the United States with a ferocity never seen before.  According to a press release from Cornell University, late blight had “never occurred this early and this widespread in the U.S.” when it started showing up all over the place early last year.

Late blight begins as ugly brown spots on the stems of potato and tomato plants, and as the spots increase in size, white fungal growth develops until finally a soft rot completely collapses the stem.

This was the disease that was responsible for the Irish potato famine in the 1850s.  A major new outbreak could occur without warning.

While it may or may not technically be a disease (depending on how you look at it), genetic modification is having a very serious affect on crops around the globe.

For example, about 10 years ago Chinese farmers began to widely adopt Monsanto’s genetically modified Bt cotton.  Well, researchers have found that since that time, mirid bugs that are resistant to the Bt pesticide have experienced a complete and total population boom.

Today, six provinces in Northern China are experiencing what can only be described as a “mirid bug plague”.  Mirid bugs eat more than 200 different kinds of fruit, vegetables and grains.  Chinese farmers in the region are completely frustrated.

In the United States, a different problem is developing.  The complete and total reliance of so many U.S. farmers on Monsanto’s Roundup herbicide has resulted in several varieties of glyphosate-resistant “superweeds” developing in many areas of the United States.

The most feared of these “superweeds”, Pigweed, can grow to be seven feet tall and it can literally wreck a combine.  Pigweed has been known to produce up to 10,000 seeds at a time, it is resistant to drought, and it has very diverse genetics.

Superweeds were first spotted in Georgia in 2004, and since then they have spread to South Carolina, North Carolina, Arkansas, Tennessee, Kentucky and Missouri.

In some areas, superweeds have become so bad that literally tens of thousands of acres of U.S. farmland have actually been abandoned.

But that is what we get for trying to “play God”.

We think that we can just do whatever we want with nature and there will not be any consequences.

One of the most frightening things about genetic modification is that it actually reduces that amount of crop diversity in the world.

For example, if nearly all farmers start using the same “brand” of genetically modified plants that are all virtually identical, it sets up a situation where crop diseases and crop failures can cascade across the planet very easily.

Genetic variety is a very desirable thing, but today our scientists are just doing pretty much whatever they want without really considering the consequences.

It has been said many times that genetic engineering is similar to “performing heart surgery with a shovel”.

The truth is that we just do not know enough about how our ecosystems work to be messing around with them so dramatically.

Perhaps even more frightening is that once these genetically engineered monstrosities have been released into our environment, it is absolutely impossible to recall them.  They essentially become a permanent part of our ecosystem.

But can we afford to make any serious mistakes at this point?

The truth is that we already live in a world that is not able to feed itself.

Tonight, approximately 1 billion people across the globe will go to bed hungry.  Every 3.6 seconds someone in the world starves to death, and three-fourths of those who starve to death are children under the age of five.

It is currently being projected that global demand for food will more than double over the next 50 years.

So what is going to happen if we start seeing widespread crop failures in the coming years?

The global food supply is not nearly as stable as most people believe.  At some point, it is going to be tested severely.