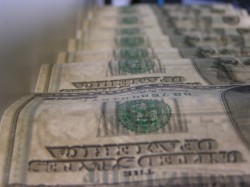 Buckle up and hold on – a new round of quantitative easing is here and things could start getting very ugly in the financial world over the coming months.  The truth is that many economists fear that an out of control Federal Reserve is “crossing the Rubicon” by announcing another wave of quantitative easing.  Have we now reached a point where the Federal Reserve is simply going to fire up the printing presses and shower massive wads of cash into the financial system whenever the U.S. economy is not growing fast enough?  If so, what does the mean for inflation, the stability of the world financial system and the future of the U.S. dollar?  The Fed says that the plan is to purchase $600 billion of U.S. Treasury securities by the middle of 2011.  In addition, the Federal Reserve has announced that it will be “reinvesting” an additional $250 billion to $300 billion from the proceeds of its mortgage portfolio in U.S. Treasury securities over the same time period.  So that is a total injection of about $900 billion.  Perhaps the Fed thought that number would sound a little less ominous than $1 trillion.  In any event, the Federal Reserve seems convinced that quantitative easing is going to work this time.  So should we believe the Federal Reserve?

The truth is that the Federal Reserve has tried this before.  In November 2008, the Federal Reserve announced a $600 billion quantitative easing program.  Four months later the Fed felt that even more cash was necessary, so they upped the total to $1.8 trillion.

So did quantitative easing work then?

The Fed is desperate to crank the debt spiral that our economic system is now based upon back up again.  The Fed thinks that somehow if it can just pump enough nearly free liquidity into the banking system, the banks will turn around and lend it out at a markup and that this will get the debt spiral cranking again.

So will $900 billion be enough to get the debt spiral cranked up again?

If 1.8 trillion dollars didn’t work before, why does the Federal Reserve think that 900 billion dollars is going to work now?  This new round of quantitative easing will create more inflation and will cause speculative asset bubbles, but it is not going to fix what is wrong with the economy.  The damage is just too vast as Charles Hugh Smith recently explained….

Anyone who believes a meager one or two trillion dollars in pump-priming can overcome $15-$20 trillion in overpriced assets and $10 trillion in uncollectible debt may well be disappointed.

In fact, economists over at Goldman Sachs estimate that it would take a staggering $4 trillion in quantitative easing to get the economy rolling again.

Of course that may eventually be what happens.  The Fed may be starting at $900 billion just to get the door open.  With these kinds of bureaucrats, once you give them an inch they usually end up taking a mile.

#1 Quantitative Easing Will Damage The Value Of The U.S. Dollar

Each time you add a new dollar to the system, it decreases the value of each existing dollar by just a little bit.  Now the Federal Reserve is pumping 900 billion dollars into the system and that is going to have a significant impact.  Bill Gross, the manager of the largest mutual fund in the entire world, said on Monday that he believes that more quantitative easing could result in a decline of the U.S. dollar of up to 20 percent….

“I think a 20 percent decline in the dollar is possible.”

Already, investors have been fleeing from the U.S. dollar and other paper currencies and have been flocking to commodities, precious metals and oil.  That means that the price of food is going to go up.  The price of gasoline is also going to go up.  American families are going to find their budgets stretched even more in the months ahead.

The Federal Reserve is playing a very dangerous game by flirting with inflation.  Once an inflationary spiral gets going, it is really difficult to stop.  Just ask anyone who lived through the Weimar Republic or anyone who lives in Zimbabwe today.  If the Federal Reserve is now going to be dumping hundreds of billions of fresh dollars into the system whenever the economy gets into trouble it is inevitable that we will see rampant inflation at some point.

#4 Inflation Is A Hidden Tax On Every American

Today, approximately a third of all U.S. real estate is estimated to have negative equity.  The Federal Reserve apparently believes that by flooding the system with gigantic sacks of cash banks will start making home loans like crazy again and home prices will rise substantially once again – thus wiping out most of that negative equity.

But the solution to the housing bubble is not another housing bubble.  The kinds of crazy home loans that were made back in the middle of the decade should never be made again.  Market forces should be allowed to bring the housing market to a new equilibrium where ordinary Americans can actually afford to purchase homes.  But that is not how our system works anymore.  Today, everything has to be manipulated.

We have already entered a time of increasing global financial instability, and the Federal Reserve is not going to help things by introducing hundreds of billions of new dollars into the game.  Over the past two decades, bubble after bubble has caused tremendous economic problems, and now all of this new money could give rise to new bubbles.  Already, we see financial institutions and investors pumping up carry trade bubbles, engaging in currency speculation and driving up commodity prices to ridiculous levels.

Quantitative easing will likely help U.S. exporters by causing the value of the U.S. dollar to sink.  However, this gain by U.S. exporters will come at the expense of foreigners.  It is essentially a “zero sum” game.  So all of those exporting countries that are already upset with us will become even more furious as the U.S. dollar declines.  Could we witness the first all-out “global currency war” in 2011?

In fact, a recent article on The Market Oracle website explained how this is already happening….

In September, China supported a Russian proposal to start direct trading using the yuan and the ruble rather than pricing their trade or taking payment in U.S. dollars or other foreign currencies. China then negotiated a similar deal with Brazil. And on the eve of the IMF meetings in Washington on Friday, Premier Wen stopped off in Istanbul to reach agreement with Turkish Prime Minister Erdogan to use their own currencies in a planned tripling Turkish-Chinese trade to $50 billion over the next five years, effectively excluding the dollar.

#9 It Is Going To Become More Expensive For The U.S. Government To Borrow Money

Right now, the U.S. government has been able to borrow money at ridiculously low interest rates.  But as the Federal Reserve keeps buying up hundreds of billions in U.S. Treasuries, the rest of the world is going to start refusing to participate in the ongoing Ponzi scheme.

Peter Schiff, the CEO of Euro Pacific Capital, says that one of the big reasons for more quantitative easing is because the U.S. government is already starting to have difficulty finding enough people to borrow from….

But the truth is that foreigners are not stupid.  They can see the shell game that is being played.  As Bill Gross noted on Monday, U.S. government debt will soon become a lot less attractive to foreign investors….

QEII not only produces more dollars but it also lowers the yield that investors earn on them and makes foreigners, which is the key link to the currencies, it makes foreigners less willing to hold dollars in current form or at current prices.

Most Americans have absolutely no idea how fragile the world financial system is right now.  Once the rest of the world loses faith in the U.S. dollar and in U.S. Treasuries this entire thing could completely unravel very quickly.

The Federal Reserve is playing a very dangerous game.  They are openly threatening the delicate balance of the world financial system.

Once the toothpaste is out of the tube, it is really hard to put it back in again.  Cross your fingers and hold on tight, because things are going to get really bumpy ahead.