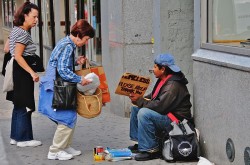 According to the U.S. Census Bureau, a higher percentage of Americans is living in extreme poverty than they have ever measured before.  In 2010, we were told that the economy was recovering, but the truth is that the number of the “very poor” soared to heights never seen previously.  Back in 1993 and back in 2009, the rate of extreme poverty was just over 6 percent, and that represented the worst numbers on record.  But in 2010, the rate of extreme poverty hit a whopping 6.7 percent.  That means that one out of every 15 Americans is now considered to be “very poor”.  For many people, this is all very confusing because their guts are telling them that things are getting worse and yet the mainstream media keeps telling them that everything is just fine.  Hopefully this article will help people realize that the plight of the poorest of the poor continues to deteriorate all across the United States.  In addition, hopefully this article will inspire many of you to lend a hand to those that are truly in need.

Tonight, there are more than 20 million Americans that are living in extreme poverty.  This number increases a little bit more every single day.  The following statistics that were mentioned in an article in The Daily Mail should be very sobering for all of us….

About 20.5 million Americans, or 6.7 percent of the U.S. population, make up the poorest poor, defined as those at 50 per cent or less of the official poverty level.

Those living in deep poverty represent nearly half of the 46.2 million people scraping by below the poverty line. In 2010, the poorest poor meant an income of $5,570 or less for an individual and $11,157 for a family of four.

That 6.7 percent share is the highest in the 35 years that the Census Bureau has maintained such records, surpassing previous highs in 2009 and 1993 of just over 6 percent.

Sadly, the wealthy and the poor are being increasingly segregated all over the nation.  In some areas of the U.S. you would never even know that the economy was having trouble, and other areas resemble third world hellholes.  In most U.S. cities today, there are the “good neighborhoods” and there are the “bad neighborhoods”.

According to a recent Bloomberg article, the “very poor” are increasingly being pushed into these “bad neighborhoods”….

At least 2.2 million more Americans, a 33 percent jump since 2000, live in neighborhoods where the poverty rate is 40 percent or higher, according to a study released today by the Washington-based Brookings Institution.

Of course they don’t have much of a choice.  They can’t afford to live where most of the rest of us do.

Today, there are many Americans that openly look down on the poor, but that should never be the case.  We should love the poor and want to see them lifted up to a better place.  The truth is that with a few bad breaks any of us could end up in the ranks of the poor.  Compassion is a virtue that all of us should seek to develop.

Not only that, but the less poor people and the less unemployed people we have, the better it is for our economy.  When as many people as possible in a nation are working and doing something economically productive, that maximizes the level of true wealth that a nation is creating.

But today we are losing out on a massive amount of wealth.  We have tens of millions of people that are sitting at home on their couches.  Instead of creating something of economic value, the rest of us have to support them financially.  That is not what any of us should want.

It is absolutely imperative that we get as many Americans back to work as possible.  The more people that are doing something economically productive, the more wealth there will be for all of us.

That is why it is so alarming that the ranks of the “very poor” are increasing so dramatically.  When the number of poor people goes up, the entire society suffers.

So just how bad are things right now?

The following are 19 statistics about the poor that will absolutely astound you….

#2 Last year, 2.6 million more Americans descended into poverty.  That was the largest increase that we have seen since the U.S. government began keeping statistics on this back in 1959.

#4 The poverty rate for children living in the United States increased to 22% in 2010.

#5 There are 314 counties in the United States where at least 30% of the children are facing food insecurity.

#8 One out of every six elderly Americans now lives below the federal poverty line.

#9 Today, there are over 45 million Americans on food stamps.

#10 According to the Wall Street Journal, nearly 15 percent of all Americans are now on food stamps.

#13 We are told that the economy is recovering, but the number of Americans on food stamps has grown by another 8 percent over the past year.

#14 Right now, one out of every four American children is on food stamps.

#15 It is being projected that approximately 50 percent of all U.S. children will be on food stamps at some point in their lives before they reach the age of 18.

#17 One out of every six Americans is now enrolled in at least one government anti-poverty program.

#18 The number of Americans that are going to food pantries and soup kitchens has increased by 46% since 2006.

#19 It is estimated that up to half a million children may currently be homeless in the United States.

Sadly, we don’t hear much about this on the nightly news, do we?

This is because the mainstream media is very tightly controlled.

I came across a beautiful illustration of this recently.  If you do not believe that the news in America is scripted, just watch this video starting at the 1:15 mark.  Conan O’Brien does a beautiful job of demonstrating how news anchors all over the United States are often repeating the exact same words.

So don’t rely on the mainstream media to tell you everything.

In this day and age, it is absolutely imperative that we all think for ourselves.

It is also absolutely imperative that we have compassion on our brothers and sisters.

Winter is coming up, and if you see someone that does not have a coat, don’t be afraid to offer to give them one.

All over the United States (and all around the world), there are orphans that are desperately hurting.  As you celebrate the good things that you have during this time of the year, don’t forget to remember them.

We should not expect that “the government” will take care of everyone that is hurting.

The reality is that millions of people fall through the “safety net”.

Being generous and being compassionate are qualities that all of us should have.

Yes, times are going to get harder and an economic collapse is coming.

That just means that we should be more generous and more compassionate than we have ever been before.