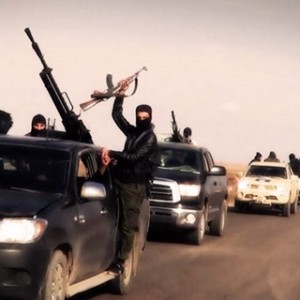 ISIS is marching through city after city in Iraq, and they are doing it with American weapons.  Thanks to a series of stunning victories in recent months, ISIS has captured a vast array of U.S. military equipment including trucks, Humvees, rockets, artillery pieces and Stinger missiles.  When the U.S. was pulling out of Iraq, we were extremely generous to the new Iraqi army.  We basically armed them to the teeth with equipment that U.S. taxpayers paid for.  But now that the new Iraqi army is folding like a 20 dollar suit in the face of ISIS jihadists, vast quantities of that military equipment are falling into the hands of some of the most radical jihadists the world has ever seen.  And considering the fact that ISIS also recently seized the equivalent of nearly $500 million in cash from a bank in Mosul, the leadership of ISIS won’t be having much problem buying anything else that they might need either.  ISIS is getting stronger with each passing day, and they are not going to be satisfied until the Iraqi government has been toppled.  It is a geopolitical mess of epic proportions, and there don’t seem to be any easy solutions on the horizon.

To say that the new Iraqi army has been incompetent would be a massive understatement.  Not only have they run away like scared kittens from these jihadists, they have also left behind staggering amounts of weaponry for them.  According to the Los Angeles Times, ISIS has captured “the weapons stores of the 2nd and 3rd [Iraqi army] divisions in Mosul, the 4th division in Salah al Din, the 12th division in the areas near Kirkuk, and another division in Diyala”.  And we aren’t just talking about rifles and ammunition.  We are talking about some pretty impressive hardware…

Government forces retreated en masse from the onslaught, leaving behind a military hardware bonanza, including the U.S.-made armored Humvees as well as trucks, rockets, artillery pieces, rifles, ammunition, even a helicopter. Some of the seized materiel was old or otherwise non-functioning; but a lot was promptly put to use on the battlefield.

Pictures of grinning Islamist warriors cruising in U.S. Humvees bedecked with white-on-black militant flags flooded the Internet and became the signature image of the ISIS rampage.

One of the most popular photos mocking the Obamas and the U.S. military under the #BringBackOurHumvee hashtag is posted below… 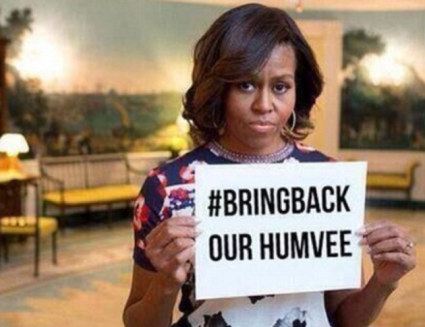 We have become a laughingstock to ISIS.  They know that we are not going to invade Iraq again.  So they are laughing at us as they use our own equipment to take over the country.

It is estimated that the military equipment that ISIS has captured so far could equip an army of 200,000 soldiers.  No wonder ISIS is recruiting more fighters so vigorously.

As WND has documented, members of ISIS were actually trained by U.S. personnel at a secret base in Jordan back in 2012…

Members of the Islamic State of Iraq and the Levant, or ISIS, were trained in 2012 by U.S. instructors working at a secret base in Jordan, according to informed Jordanian officials.

The officials said dozens of ISIS members were trained at the time as part of covert aid to the insurgents targeting the regime of Syrian President Bashar al-Assad in Syria. The officials said the training was not meant to be used for any future campaign in Iraq.

The Jordanian officials said all ISIS members who received U.S. training to fight in Syria were first vetted for any links to extremist groups like al-Qaida.

So U.S. taxpayers have not just paid for their weapons.

We have also paid for their training.

Not only that, but ISIS has also captured the Al Muthanna chemical weapons facility.

According to WND, some officials are concerned that ISIS may be able to use that sarin gas production facility to start churning out poison gas…

And they also may be working with a man who’s known for his expertise in making sarin, a manmade toxin that was developed in Germany and can, according to the Centers for Disease Control, produce loss of consciousness, convulsions, paralysis and death in victims who are exposed.

The revelations comes as the State Department acknowledged that ISIS has captured a stockpile of old chemical weapons at the Al Muthanna chemical weapons production complex as its fighters sweep through Iraq’s Sunni- controlled region.

The access to a sarin poison gas production facility, and the man with the expertise to operate it, is the result of a new alliance between the brutal jihadist fighters and Izzat Ibrahim al-Douri, who was a top military commander and vice president to the deposed Saddam Hussein.

And the folks running ISIS are crazy enough to do just about anything.  They are stone cold killers that will go to extreme lengths to advance their cause.  If you are not very familiar with ISIS yet, the YouTube documentary posted below contains some footage from some of their recent triumphs…

Iraq is literally being torn to pieces by this conflict, and even young boys are getting swept up into the fighting.

For example, check out this excerpt from a recent Daily Beast article…

It was a surprising sight. The customers standing in Haj Hamdoun’s store in central Mosul watched as a masked child came into the shop, bought what he wanted without saying a word and then left again, carrying a bag containing candies and milk in one hand and a heavy machine gun, which was just about as big as him, in the other.

This was Abdullah, who appears to be the city’s youngest volunteer with the Sunni extremist group, the Islamic State of Iraq and al-Sham, or ISIS, that took control of Mosul over two weeks ago.

Abdullah is not yet 11 years old. But his older brother and his father, who was a senior member of ISIS, were killed in fighting between the group and Iraqi security forces in 2013. That’s why Abdullah joined ISIS, although he is far from the only child in its ranks. 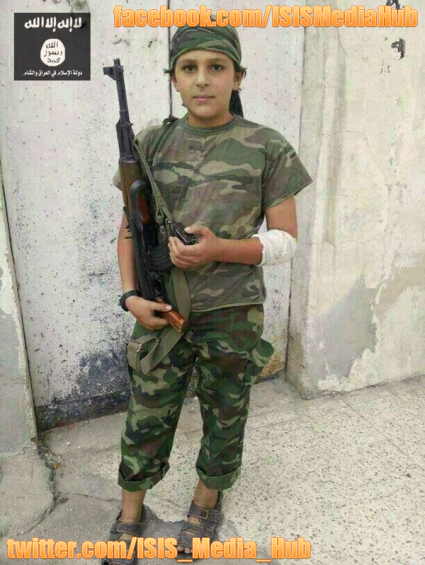 For ISIS, the conquest of Iraq and Syria would just be the beginning.  Ultimately, ISIS intends to establish a caliphate that will rule the entire Middle East (and eventually the entire world).

And who is going to stop them from taking over Iraq?  These radicals are more than willing to die for what they believe in, and the Iraqi army has been pretty pathetic so far.

The United States seems to have very little interest in another Iraq war, and other nations would probably be extremely hesitant to intervene as well.

So who is going to stop ISIS?

And is there a larger geopolitical agenda at work here?