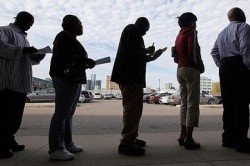 Guess what?  Unemployment is up again!  That’s right – even though Wall Street is swimming in cash and the Obama administration is declaring that “the recession is over”, the U.S. unemployment rate has gone even higher.  So are you enjoying the jobless recovery?  The truth is that there should not be any talk of a “recovery” as long as the “official” unemployment rate remains at around 10 percent and the “real” unemployment continues to hover around 17 percent.  There are millions and millions of American families that are living every day in deep pain because of the lack of jobs.  Meanwhile, there are all of these economic pundits that are declaring that we are just going to have to realize that chronic unemployment is the “new normal” and that if other nations can handle high rates of unemployment then so can we.  The most optimistic economists are projecting that we can perhaps get the unemployment rate down to around 8 percent by 2012.  On the other hand, there are many economists that are convinced that things are going to get even worse.

If you have never been unemployed, it can be hard to describe how soul-crushing it can be.  As the bills pile up and the financial obligations mount, the pressure can be debilitating.  Being unemployed for an extended period of time can easily plunge you into depression and grind your self-worth away to almost nothing.  After getting rejected dozens of times (or even hundreds of times), many Americans simply give up.  There are countless marriages and countless families that are being ripped to shreds by financial pressure even as you read this.  When the money is gone and there is no job in sight it can be a really, really empty feeling.

Of course there is a whole lot more to life than money, but it can be difficult to tell that to someone who can barely sleep at night because of the intense pressure to find a job.

The vast majority of Americans have at least one family member or close friend that is looking for work right now.  Times are really, really tough and unfortunately the long-term outlook is very bleak.  We should have compassion on those who are out of work right now, because soon many of us may join them.

The following are 25 unemployment statistics that are almost too depressing to read….

#1 According to the Bureau of Labor Statistics, the U.S. unemployment rate for November was 9.8 percent.  This was up from 9.6 percent in October, and it continues a trend of depressingly high unemployment rates.  The official unemployment number has been at 9.5 percent or higher for well over a year at this point.

#4 In the United States today, there are over 15 million people who are “officially” considered to be unemployed for statistical purposes.  But everyone knows that the “real” number is even much larger than that.

#6 The number of “persons not in the labor force” in the United States recently set another new all-time record.

#7 It now takes the average unemployed American over 33 weeks to find a job.

#8 When you throw in “discouraged workers” and “underemployed workers”, the “real” unemployment rate in the state of California is actually about 22 percent.

#9 In America today there are not nearly enough jobs for everyone.  In fact, there are now approximately 5 unemployed Americans for every single job opening.

#11 The U.S. economy would need to create 235,120 new jobs a month to get the unemployment rate down to pre-recession levels by 2016.  Does anyone think that there is even a prayer that is going to happen?

#12 There are 9 million Americans that are working part-time for “economic reasons”.  In other words, those Americans would gladly take full-time jobs if they could get them, but all they have been able to find is part-time work.

#13 In 2009, total wages, median wages, and average wages all declined in the United States.

#15 The United States has lost at least 7.5 million jobs since the recession began.

#16 Today, only about 40 percent of Ford Motor Company’s 178,000 workers are employed in North America, and a big percentage of those jobs are in Canada and Mexico.

#18 Earlier this year, one poll found that 28% of all American households had at least one member that was looking for a full-time job.

#19 In the United States today, over 18,000 parking lot attendants have college degrees.

#20 The United States has lost a staggering 32 percent of its manufacturing jobs since the year 2000.

#22 Unless Congress acts, and there is no indication that is going to happen, approximately 2 million Americans will stop receiving unemployment checks over the next couple of months.

#23 A poll that was released by the Pew Research Center back in June discovered that an astounding 55 percent of the U.S. labor force has experienced either unemployment, a pay decrease, a reduction in hours or an involuntary move to part-time work since the economic downturn began.

#24 According to Richard McCormack, the United States has lost over 42,000 factories (and counting) since 2001.

#25 In the United States today, 317,000 waiters and waitresses have college degrees.

But this is what we get for creating the biggest debt bubble in the history of the world.  For decades we have been digging a deeper hole for ourselves by going into increasingly larger amounts of debt.  In America today, our entire economy is based on debt.  Even our money is debt.  We were fools if we ever thought this could go on forever.

Just think about it.  Have you ever gone out and run up a bunch of debt?  It can be a lot of fun sitting behind the wheel of a new car, running your credit cards up to the limit and buying a beautiful big house that you cannot afford.

But in the end what happens?

It always catches up with you.

Well, our collective debt is starting to catch up with us.  There is a sea of red ink on every level of American society.  It is only a matter of time before it destroys our economy.

If you think that things are bad now, just wait.  Things are going to get a whole lot worse.  A horrific economic collapse is coming, and it is going to be very, very painful.