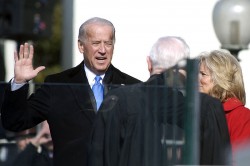 An increasing number of politicians and celebrities are openly declaring that if the economy continues to decline, it could lead to civil unrest, more crime and outbreaks of violence all over America.  But instead of loudly denouncing the coming violence, many of them are making it sound like the natural response for those that have lost hope in the economy is to resort to violence.  This is extremely unfortunate.  The truth is that violence is not the solution to any of our problems.  Violence is only going to make things worse.  But right now a lot of big names are warning that if significant changes are not made soon, the only alternative is going to be civil unrest and violence.  In fact, one of the latest to make a bold declaration like this is Vice President Joe Biden.  According to Biden, there are going to be a lot more rapes and a lot more murders if Congress does not pass Obama’s jobs plan.

The following are comments that Biden made about Flint, Michigan during a recent speech he gave to promote the jobs bill….

So is there some truth to what Biden is saying?

Of course there is.  Many of our cities are rapidly being transformed into hellholes where crime is rising dramatically.

But instead of fixing the underlying problems, Biden is saying that if we don’t spend more federal money in these local communities we are going to have chaos in the streets.

Sadly, this sounds so much like what a lot of other prominent people have been saying lately.

“You know, look — this is a humanitarian — you know, you’re smart enough to see this . . . People, you know, if it continues, we’re going to start to see civil unrest in this country. I hate to say that, but I think it’s imminently possible.”

“The smart rich know they can only build the gate so high. And, and, sooner or later history proves that people when they’ve had enough aren’t going to take it anymore. And much better to deal with it nonviolently now, through the political system, than what could possibly happen in the future, which nobody wants to see”

Even more bizarre is what Roseanne Barr had to say during a recent appearance on RT….

“I first would allow the guilty bankers to pay, you know, the ability to pay back anything over $100 million [of] personal wealth because I believe in a maximum wage of $100 million. And if they are unable to live on that amount of that amount then they should, you know, go to the reeducation camps and if that doesn’t help, then being beheaded”

Are “reeducation camps” and acts of violent revenge going to solve any of our problems?

But this is a mindset that is growing.

There are millions upon millions of Americans that are deeply suffering right now.  The mainstream media is not telling them the truth about the economy and neither are our politicians.  So the American people simply do not understand what is going on.

That means that they are prime candidates to be drawn into radical protest movements.

So far, the Occupy Wall Street protests have been non-violent, but that doesn’t mean that some of the protesters do not have violence on their minds.

For example, the following is what one speaker at the Occupy Los Angeles protests recently had to say about violence….

“One of the speakers said the solution is nonviolent movement. No, my friend. I’ll give you two examples: French Revolution, and Indian so-called Revolution.

Gandhi, Gandhi today is, with respect to all of you, Gandhi today is a tumor that the ruling class is using constantly to mislead us. French Revolution made fundamental transformation. But it was bloody.

India, the result of Gandhi, is 600 million people living in maximum poverty.

So, ultimately, the bourgeoisie won’t go without violent means. Revolution! Yes, revolution that is led by the working class.

You can see video of these shocking comments right here.

In past decades, the American population endured tough times with dignity and grace for the most part.

But times are different now.  The American people have become addicted to endless prosperity, and now that things are going downhill they want someone to blame.  As the economy continues to crumble, we are going to see some national “temper tantrums” that are going to be absolutely mind blowing.

For even more on how anger and frustration are rising in America, please see an article I did the other day entitled: “Buckle Up: America Is Getting Very Angry And The Protests Are Going To Become Much More Frightening“.

But let us not diminish in any way the very real pain and suffering that tens of millions of Americans are going through right now.  About a million families a year are losing their homes, the number of good jobs continues to decline and many of our communities are rapidly turning into hellholes.

Unfortunately, there are signs that things will soon get even worse for our local communities.  For example, the largest county in Alabama is preparing for what would be the biggest municipal bankruptcy in the history of the United States.

And this is just the beginning.

Hundreds of other state and local governments from coast to coast are on the verge of bankruptcy.  The cry for bailouts from the federal government is going to get louder and louder, but the federal government has already piled up the biggest mountain of debt in the history of the world and there is only so much more debt that it can take on before our entire financial system collapses.

All of the long-term trends are pointing to a total collapse of the economy.  If you think that people are angry now, just wait until that happens.  We are going to see outbreaks of rioting and looting and crime and violence that will be absolutely unprecedented.

The American people are not morally equipped to handle a severe depression.  We simply do not have the same character that previous generations possessed.  We have gotten very soft and very spoiled and very selfish.

But that doesn’t mean that there won’t be a remnant that will hold on to the truth and that will stand for what is right.

When things are the darkest, that is when the greatest heroes are called for.

Let us work together to wake up America, and let us continue shining a light in the darkness.

We must work while it is still day, because night is coming soon.