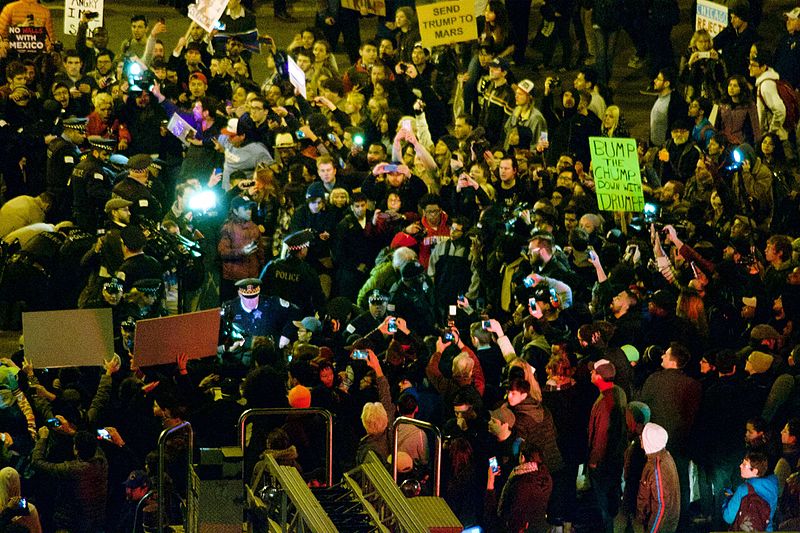 America is coming apart at the seams, and Trump rallies have become the latest flashpoint for the rising tide of civil unrest that is sweeping the nation.  For years, I have been writing about the increasing levels of anger and frustration in this country, but now they are reaching a fever pitch.  And rather than channeling all of our anger and frustration into solving our problems, we have allowed ourselves to become deeply divided and many Americans seem to be taking glee in fighting with one another.  Instead of learning to hate one another, we should be learning how to love one another.  Unfortunately, America has chosen another path, and 2016 is very rapidly starting to look very much like the chaotic political year of 1968.  No matter how the rest of this election season plays out, it appears that we have entered a time of violence, chaos, civil unrest and greatly increased tension among Americans.

On Friday, thousands of radical leftists showed up at a planned Trump rally at the University of Illinois at Chicago with the express purpose of disrupting it.  Fortunately Donald Trump cancelled the rally, because there was a very real possibility that mass violence could have erupted.  The following description of what happened comes from Wikipedia…

On March 11, 2016, the Donald Trump presidential campaign canceled a planned rally at the University of Illinois at Chicago (UIC), in Chicago, Illinois, citing “growing safety concerns” due to the presence of thousands of protesters in and outside of his rally[3]. Thousands of anti-Trump demonstrators responding to civic leaders’ and social media calls to shut the rally down had gathered outside the arena, and several hundred more filled seating areas within the UIC Pavilion, where the rally was to take place. When the Trump campaign announced that the rally would not take place, there was a great deal of shouting and a few small scuffles between Trump supporters and anti-Trump protestors.

The Daily Caller has identified three groups that were heavily involved in organizing the planned disruption of the Trump rally in Chicago.  Those three groups are ANSWER (Act Now to Stop War and End Racism) Chicago, the Illinois Coalition of Immigrant and Rights Reform, and La Raza Chicago.

In addition, MoveOn.org also appears to have been involved in what took place in Chicago.  The following comes from Infowars…

“Mr. Trump and the Republican leaders who support him and his hate-filled rhetoric should be on notice after tonight’s events,” the George Soros funded MoveOn web page states. “To all of those who took to the streets of Chicago, we say thank you for standing up and saying enough is enough. To Donald Trump, and the GOP, we say, welcome to the general election.”

Following the cancelled rally in Chicago, a radical leftist protester named Thomas Dimassimo attempted to storm the stage while Trump was speaking at an event in Dayton, Ohio.  This YouTube video contains footage of that chilling moment…

Thomas Dimassimo has been identified as a Bernie Sanders supporter, and even though his Twitter account has now been erased, this screenshot was taken while it was still up…

There was also another tweet where he said that his goal was “martrydom“.  I have seen some news reports that link Dimassimo to ISIS, but those reports are being disputed.  Either way, the fact that the Secret Service had to intervene to protect Trump from this lunatic is more than just a little bit alarming.

Following the incident in Dayton, a Trump rally in Kansas City was disrupted more than a dozen times by political agitators.  At one point, police actually used pepper spray on some of the protesters.

Scenes such as these are starting to cause many people to make direct comparisons between 2016 and 1968.

And if the chaos is this bad already, what will things look like during the general election?

Candidates on all sides should be calling for peace and calm, but instead they are pointing fingers at one another.

For example, Hillary Clinton is putting the full blame for the unrest on Donald Trump…

Democratic presidential front-runner Hillary Clinton said this weekend that Trump is guilty of “political arson,” adding that “the ugly, divisive rhetoric we are hearing from Donald Trump and the encouragement of violence and aggression is wrong, and it’s dangerous,” The New York Times reported.

“You had professional disruptors, thousands of them, from Sanders and to a smaller extent, Hillary (Clinton),” he said of a Friday night event in Chicago that Trump canceled after chaos broke out there.

Unfortunately, most Americans have absolutely no idea where all of this is leading.

A house that is divided will fall, and America is now more divided than at any other time in my entire lifetime.

If there was a single set of values or principles that united us, it would be possible for us to come together as a nation and solve our problems.  But there isn’t.  We have rejected the values and the principles of our founders, and these days Americans are being pulled in dozens of different directions.  In fact, if you ask 100 different Americans what we need to do to get our country back on the right track you are probably going to get 100 different answers.

The chaos and violence around our political process is going to get a lot worse than this.  And we are going to see more communities erupt just like Ferguson and Baltimore did.

All of this could have been avoided if we could have simply learned to love one another.  But instead, we have allowed ourselves to be divided in just about every way imaginable, and the mainstream media is constantly tossing more fuel on the fire.

This isn’t about Donald Trump, Bernie Sanders, Hillary Clinton or any other politician.  Rather, this is about a once great country that is deeply, deeply divided and that is coming apart at the seams right before our very eyes.

May God have mercy on the late, great United States of America.