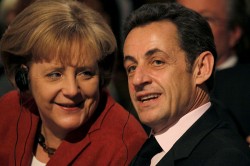 Have you heard the good news?  Financial armageddon has been averted.  The economic collapse in Europe has been cancelled.  Everything is going to be okay.  Well, actually none of those statements is true, but news of the “debt deal” in Europe has set off a frenzy of irrational exuberance throughout the financial world anyway.  Newspapers all over the globe are declaring that the financial crisis in Europe is over.  Stock markets all over the world are soaring.  The Dow was up nearly 3 percent today, and this recent surge is helping the S&P 500 to have its best month since 1974.  Global financial markets are experiencing an explosion of optimism right now.  Yes, European leaders have been able to kick the can down the road for a few months and a total Greek default is not going to happen right now.  However, as you will see below, the core elements of this “debt deal” actually make a financial disaster in Europe even more likely in the future.

The two most important parts of the plan are a 50% “haircut” on Greek debt held by private investors and highly leveraging the European Financial Stability Facility (EFSF) to give it much more “firepower”.

Both of these elements are likely to cause significant problems down the road.  But most investors do not seem to have figured this out yet.  In fact, most investors seem to be buying into the hype that Europe’s problems have been solved.

Investors — at least for now — don’t have to worry about a financial collapse like the one in 2008, after Wall Street investment bank Lehman Bros. filed for bankruptcy, sparking a global financial crisis.

“Financial Armageddon seems to have been taken off the table,” says Mark Luschini, chief investment strategist at Janney Montgomery Scott.

But now let’s look at the facts.

You can’t solve a debt problem with even more debt.  But that is what this debt deal is trying to do.

The politicians in Europe did not want to raise more money for the EFSF the “hard way”.  Voters in Germany (and other European nations) are overwhelmingly against contributing even more cash to a fund that many see as a financial black hole.

So what do you do when more money is needed but nobody wants to contribute?

Essentially, this debt deal calls for the EFSF to become four or five times larger by “leveraging” the existing funds in the EFSF.

But isn’t that risky?

Of course it is.

There are some leaders in Europe that recognize this.  For example, an article in The Telegraph notes the reservations that the president of the Bundesbank has about this plan….

Jens Weidmann, the president of the Bundesbank and a member of the European Central Bank, sounded the alarm over the plan to “leverage” the fund by a factor of four to five times without putting any new money into the pot.

He warned that the scheme could be hit by market turbulence with taxpayers left holding the bill for risky investments in Italian and Spanish bonds.

So who is going to fund all of this new debt?

Well, it turns out that the Europeans are counting on the same folks that the U.S. government is constantly borrowing money from.

So is borrowing money from the Chinese to fund bailouts for Greece and other weak sisters in Europe sound policy?

And the sad thing is that this expanded EFSF is still not going to be enough to solve the financial problems in Europe.

According to an article in The Telegraph, a recent survey of economists found that most of them do not believe that this new plan is going to raise enough money….

The plan to increase the European Financial and Stability Facility to €1  trillion on paper was attacked by economists as not enough to “stave off” worsening debt problems in Italy and Spain.

In a survey of economists, 26 of 48 thought the firepower was not enough.

But the worst part of this new plan is the 50 percent “haircut” that private investors are being forced to take.

This is essentially a partial default by the Greek government.  A lot of folks are going to get hit really hard by losses from this.  Instead of making financial institutions in Europe stronger, these losses are going to make a lot of them even weaker.

Normally, in the event of a default, credit default swap contracts would be triggered.  But apparently because this was considered to be a “voluntary” haircut, that is not going to happen in this instance.

A Bloomberg article explained this in greater detail.  The following is a brief excerpt….

The EU agreement with investors for a voluntary 50 percent writedown on their Greek bond holdings means $3.7 billion of debt-insurance contracts won’t be triggered, according to the International Swaps & Derivatives Association’s rules.

That means that investors and financial institutions all over the world are just going to have to eat these losses.

Greek Prime Minister George Papandreou is already acknowledging that a number of Greek banks will have to be nationalized because of the severity of this “haircut”.  A recent CNBC article detailed this….

The haircut is expected to impose big losses on the country’s banks and state-run pension funds, which are up their necks in toxic Greek government bonds of about 100 billion euros.

“It is very likely that a large part of the banks’ shares will pass into state ownership,” Papandreou said. He pledged, however, that these stakes will be sold back to private investors after the banks’ restructuring.

So where will the Greek government get the funds to “replenish” the capital of those banks?

But we haven’t even discussed the worst part of this “debt deal” yet.

If you don’t remember any other part of this article, please remember this.

The debt deal in Europe sends a very frightening message to the market.

The truth is that Europe could have totally bailed out Greece without any sort of a “haircut” taking place.

So now investors all over the globe have got to be thinking that if they are holding Portuguese bonds, Italian bonds or Spanish bonds there is a really good chance that they will be forced to take a massive “haircut” at some point as well.

At this time last year, the yield on two year Italian bonds was about 2.5 percent.  Now it is about 4.5 percent.  As investors begin to price in the probability of having to take a future “haircut” on Italian debt, those bond yields are going to go much, much higher.

In essence, the haircut on Greek debt is a signal to investors that they should require a much higher rate of return on the debt of all of the PIIGS.  This is going to make the financial collapse of all of the PIIGS much more likely.

Remember, about this time last year the yield on two year Greek bonds was about 10 percent.  Today, it is over 70 percent.

As I wrote about in a previous article, the western world is in debt up to its eyeballs right now and trying to kick the can down the road is not going to solve anything.

Our leaders may succeed in delaying the pain for a while, but it most definitely is coming.

Greece, Portugal, Ireland and Italy all have debt to GDP ratios that are well over 100% right now.  Spain is in a huge amount of trouble as well.

When you add up all the debt, Greece, Portugal, Ireland, Italy and Spain owe the rest of the world about 3 trillion euros combined.

If Italy or Spain goes down, the rest of Europe is going to be helpless to stop it.  There simply is not going to be enough money to bail either one of them out.

That is why this “debt deal” is so alarming.  All investors in Italian or Spanish debt will now have to factor in the probability that they will be required to accept a 50 percent haircut at some point in the future.

If the markets behave rationally (and if the ECB does not manipulate them too much), it appears inevitable that bond yields over in Europe are going to rise substantially, and that will put tremendous additional financial strain on governments all over Europe.

Basically, we have got a huge mess on our hands, and this debt deal just made it a lot worse.

Yes, a financial collapse has been averted in Greece for the moment, but the truth is that there is no real reason to be celebrating this deal.

A massive financial storm is coming to Europe, and this “debt deal” has made that all the more certain.

Once again, politicians in Europe have tried to kick the can down the road, but in the end their efforts are only going to lead to complete and total financial disaster.