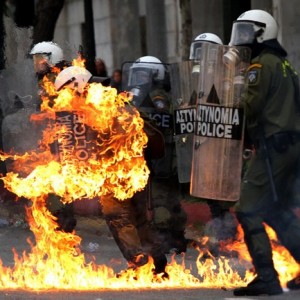 The summer of 2010 promises to be the most tumultuous summer in the short history of the European Union.  The sovereign debt crisis sweeping the continent threatens to cause economic and political instability on a scale not seen in Europe for decades.  The truth is that governments across the eurozone have accumulated gigantic piles of debt that simply are not sustainable.  Prior to the implementation of the euro, these European governments often “printed” their way out of messes like this, but now they can’t do that.  Now they either have to dramatically cut government expenses or they have to default.  But the austerity measures that the IMF and the ECB are pressuring these European governments to adopt are likely to have some very painful side effects.  Not only will these austerity measures cause a significant slowdown in economic growth, they are also likely to cause the same kinds of protests, strikes and riots that we saw in Greece to erupt all over Europe.

You see, most Europeans have become very accustomed to the social welfare state.  Tens of millions of Europeans aren’t about to let anyone cut their welfare payments or the wages on their cushy government jobs.  In most of the European nations that are experiencing big financial problems there are very powerful unions and labor organizations that do not want anything to do with austerity measures and that are already mobilizing.

As the IMF and the ECB continue to push austerity measures all over Europe this summer, the chaos that we witnessed in Greece could end up being repeated over and over again across the continent.  This could truly be Europe’s summer of discontent.

The following are just a few of the countries that we should be watching very carefully in the months ahead….

In many ways, the economic situation in Spain is now even worse than the economic situation in Greece.  Spain’s unemployment was already above 20 percent even before this recent crisis.  There are now 4.6 million people without jobs in Spain.  There are 1.6 million unsold properties in Spain, six times the level per capita in the United States.  Total public/private debt in Spain has reached 270 percent of GDP.

But this past week things really started to spin out of control in Spain.   Ambrose Evans-Pritchard of The Telegraph describes the current situation in Spain this way….

For Spain it has been a horrible week. The central bank seized CajaSur and imposed draconian write-down rules on banks to restore confidence. The Spanish Socialist and Workers Party (PSOE) of Jose Luis Zapatero then rammed a 5pc cut in public wages through the Cortes by a single vote, shattering consensus. The government cannot hope to pass a budget. Its own trade union base is planning a general strike.

The austerity measures that Spain has been pressured to implement have proven so unpopular in Spain that many are now projecting that Spain’s socialist government will be forced to call early elections.

Spain finds itself in a very difficult position.  They have a debt that they cannot possibly handle, the IMF and the ECB are pressuring Spain to implement austerity measures which are wildly unpopular with the public, and if Spain does implement those austerity measures it may send the Spanish economy into a downward spiral.

In addition, the fact that Fitch Ratings has stripped Spain of its AAA status has pushed Spain to the edge of financial oblivion.

A recent editorial inEl Pais spoke of the “perverse spiral” that Spain’s economy is entering….

“The Fitch note drives home the apparently unsolvable contradiction in which the Spanish economy finds itself. To maintain debt solvency Spain must squeeze public spending: yet this policy undermines the chances of recovery which itself causes further loss of confidence.”

And Spain’s very powerful labor organizations are not about to take these austerity measures sitting down.  In fact, the two largest trade unions in Spain are already calling for a general strike.

So could Spain end up being the next Greece?

France admitted on Sunday that keeping its top-notch credit rating would be “a stretch” without some tough budget decisions.

But French citizens are not too keen on belt-tightening.  We all remember the massive riots in France a few years ago when it was proposed the the work week should be shortened.  It certainly seems unlikely that the French will accept “tough budget decisions” without making some serious noise.

The Italian government recently approved austerity measures worth 24 billion euros for the years 2011-2012.  But the Italian public is less than thrilled about it.

In fact, Italy’s largest union has announced that it will propose to its members a general strike at the end of June to protest these measures.

Under pressure from the IMF and the ECB, Portugal has agreed to impose fresh austerity measures that include much higher taxes and very deep budget cuts.

And the truth is that Portugal desperately needs to do something to get their finances under control.  Recent EU data shows that Portugal’s total debt is 331 percent of GDP, compared to only 224 percent for Greece.

So will the Portuguese public accept these austerity measures?

In fact, Fernando Texeira dos Santos, Portugal’s finance minister, says that he expects “violent episodes” comparable to those in Greece but insists that there is no other option.

So it promises to be a wild summer in Portugal.  The CGTP trade union federation in Portugal has promised to mobilize their members….

“Either we come up with a very strong reaction or we will be reduced to bread and water.”

They have already been rioting in the streets in Romania.

Tens of thousands of workers and pensioners recently took to the streets in Romania to protest the harsh austerity measures that the Romanian government is imposing at the request of the International Monetary Fund.

The Romanian people have been through incredibly hard times before, and they aren’t about to let the IMF and the ECB impose strict austerity measures on them without a fight.

It is being reported that Germans are bracing themselves for a “bitter” round of government budget cuts.  It seems that even Germany has some belt-tightening to do.

In addition, resentment is rising fast in Germany as the population there realizes that it is Germany that is going to be the one funding a large portion of the bailouts for these other European nations.

How long will the German people be able to control their tempers?

The Wall Street Journal is warning that Ireland could be Europe’s next financial basket case.

Well, the Irish have gotten into a ton of debt, and they are now finding it very expensive to finance new debt.  The Irish government is now paying approximately 2.2 percentage points more than Germany is to borrow money for 10 years, while Spain (even with their economy in such a state of disaster) only has to pay 1.6 percentage points more than Germany.

But if “austerity measures” come to Ireland, how do you think the public will react?

It likely would not be pretty.

The exploding debt situation in the U.K. was a major issue in the most recent election.  David Cameron promised the voters to get the U.K.’s exploding debt situation under control.  But the coming budget cuts are likely to be incredibly painful.  In fact, Bank of England governor Mervyn King has even gone so far as to warn that public anger over the coming austerity measures will be so painful that whichever party is seen as responsible will be out of power for a generation.

But it isn’t just national governments that are in trouble in Europe.  The European Central Bank is warning that eurozone banks could face up to 195 billion euros in losses during a “second wave” of economic problems over the next 18 months.

The truth is that almost everyone is expecting the next couple of years to be very tough economically all across Europe.

But the vast majority of the European public is not going to understand the economics behind what is happening.  All most of them are going to know is that the budget reductions, tax increases and pay cuts really, really hurt and that is likely to result in a whole lot of anger.

When Europeans get really angry it isn’t pretty.  If what happened in Greece is any indication, this upcoming summer and fall could be a really wild one throughout Europe.

“Euroland, burned down. A continent on the way to bankruptcy”