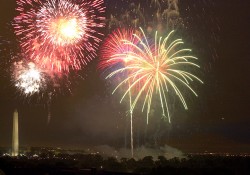 Every year when July 4th rolls around, Americans from coast to coast celebrate July 4th with cookouts, outdoor concerts and fireworks.  We love celebrating Independence Day and yet we are deeply enslaved to debt.  We like to think of ourselves as “free” and yet we have rolled up the biggest pile of debt the world has ever seen.  The people that we have borrowed all of this money from expect to be paid.  Sadly, instead of addressing the problem, we have been loading more debt on to the backs of future generations with each passing year.  What we are doing to our kids and our grandkids is so immoral that is almost defies description.  At the heart of this debt-based system stands the Federal Reserve.  It is a perpetual debt machine that was designed to trap the U.S. government in a spiral of debt permanently.  Today, the U.S. national debt is 4700 times larger than it was when the Federal Reserve was created back in 1913.  This year alone, we will add more to the national debt than we did from the presidency of George Washington to the beginning of the presidency of Ronald Reagan.  So yes, enjoy the hotdogs and the fireworks, but also remember that we will never be free as long as this constantly expanding debt problem is hanging over our heads.

If you know anyone that does not take our national debt problem seriously, please share with them the video posted below.  It is entitled “Economic Armageddon and You” and it is definitely worth the 5 minutes that it takes to watch it.  Someone out there did a really great job of explaining our debt problem in a way that almost anyone can understand….

So is there any solution to this problem?

Not under the current system.

The debt-based Federal Reserve system is designed to expand U.S. government debt indefinitely.  But of course all debt bubbles burst eventually and we are rapidly reaching that point.

It is being projected that the U.S. national debt will hit 344% of GDP by the year 2050 if we continue on our current course.  The truth is that it would never get even close to that high because the whole system would completely collapse long before then.

We need to abandon our current debt-based financial system.  The way that our current system normally works, whenever more money is created more debt is also created.  Such a system is inevitably doomed to fail.

But even though more Americans than ever are awake to the flaws in our monetary system, the truth is that neither major political party is remotely ready to even consider an end to the current financial system.

Neither of those solutions will work.

Many conservatives are so frustrated with the whole thing that they just want Congress to refuse to raise the debt ceiling.  I have taken a lot of heat over the past couple of days for suggesting that this is a bad idea.

If we refuse to raise the debt ceiling, our borrowing costs will absolutely explode.  Even if the U.S. government adopted a “balanced budget” by some miracle, the reality is that the federal government would still need to “roll over” very large amounts of debt every single year.  If interest rates on U.S. debt rise substantially it will be beyond catastrophic.

If interest rates were to start rising as a result of a debt default, interest on the national debt would likely double or even triple.

Look, if we want to come anywhere close to balancing the budget under our current system, it will be a whole lot easier to do if we are spending 400 billion dollars on interest on the national debt rather than 1.2 trillion dollars.

Today, the U.S. government only takes in about 2.2 trillion dollars in taxes.  How in the world are we going to have a chance if we have to pay out a trillion dollars just in interest on the national debt?

A U.S. default would not only be historic, it would also almost certainly lead to a new financial crisis. Interest rates would likely spike, equity markets would plunge along with the value of the dollar, and the country could fall back into a recession.

We have to raise the debt ceiling.

So does this mean that I am advocating “kicking the can down the road”?

If you are a conservative, you can still get the same result that you want without destroying the credit rating of the United States.

All the Republicans in Congress have to do is to pledge that they will never pass anything but a balanced budget for 2012 or for any year beyond that.  Without the permission of the House of Representatives, Barack Obama and the Democrats cannot continue their deficit spending.  The sad truth is that the Republicans have been enabling and actively participating in this debt binge all along.

A balanced budget would definitely hurt the economy, but at least it would not wreck our credit rating and cause our borrowing costs to multiply.

But is that what the Republicans are shooting for?

It is being reported that the Republicans and the Democrats have tentatively agreed to between $1 trillion and $2 trillion in budget cuts over the next 10 years.

So that comes to $200 billion in spending cuts a year at most.

Considering the fact that we are running budget deficits of about a trillion and a half dollars a year, that is not nearly enough.

So don’t accuse me of wanting to kick the can down the road.  I want to actually do something substantial about the national debt.  I just don’t think it is a good idea to trash our credit rating in the process.

It is the Republicans and the Democrats in Congress that are kicking the can down the road.

Trillion dollar deficits are not acceptable.  Our nation is on the road to financial ruin.

But it is not just the federal government that is in massive financial trouble.

The reality is that we have “government debt problems” from coast to coast.

Did you hear that the government of Minnesota shut down the other day?

As the financial health of almost every single state government continues to decline, this type of thing is going to become more common.

In the state of Illinois things are so bad that some income tax refunds have not been paid since 2009.  The following is a brief excerpt from an article on the Economic Policy Journal blog….

I repeat, this is no time to own state or municipal bonds. The desperation level at various states and municipalities is getting more and more intense.

With the start of a new budget year just two days away, thousands of Illinois businesses are still waiting for state income tax refunds dating back to 2009.

In a recent article entitled “Is The Economy Improving?“, I went into greater detail about the horrific financial crisis that Illinois is facing….

How can we claim that our country is free when we are enslaved to such horrible debt burdens?

The borrower is always a servant of the lender.  As a nation, we are becoming a little bit less independent every single day.

So enjoy celebrating Independence Day while you still can.

If we continue on the path that we are currently on, nobody is going to be celebrating much of anything in the future.