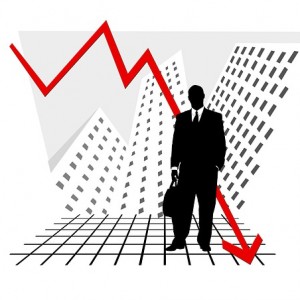 There are some who believe that the next great financial crash will not begin in the United States.  Instead, they are convinced that a financial crisis that begins in Europe or in Japan (or both) will end up spreading across the globe and take down the U.S. too.  Time will tell if they are ultimately correct, but even now there are signs that financial trouble is already starting to erupt in both Germany and Japan.  German stocks have declined 10 percent since July, and that puts them in “correction” territory.  In Japan, the economy is a total mess right now.  According to figures that were just released, Japanese GDP contracted at a 7.1 percent annualized rate during the second quarter and private consumption contracted at a 19 percent annualized rate.  Could a financial collapse in either of those nations be the catalyst that sets off financial dominoes all over the planet?

This week, the worst German industrial production figure since 2009 rattled global financial markets.  Germany is supposed to be the economic “rock” of Europe, but at this point that “rock” is starting to show cracks.

And certainly the civil war in Ukraine and the growing Ebola crisis are not helping things either.  German investors are becoming increasingly jittery, and as I mentioned above the German stock market has already declined 10 percent since July…

German stocks, weighed down by the economic fallout spawned by the Ukraine-Russia crisis and the eurzone’s weak economy, are now down more than 10% from their July peak and officially in correction territory.

The DAX, Germany’s benchmark stock index, has succumbed to recent data points that show the German economy has ground to a halt, hurt in large part by the economic sanctions levied at its major trading partner, Russia, by the U.S. and European Union as a way to get Moscow to butt out of Ukraine’s affairs. The economic slowdown in the rest of the debt-hobbled eurozone has also hurt the German economy, considered the economic locomotive of Europe.

And when you look at some of the biggest corporate names in Germany, things look even more dramatic.

Just check out some of these numbers…

The hardest hit sectors have been retailers, industrials and leisure stocks with sports clothing giant Adidas down 37.7pc for the year, airline Lufthansa down 27pc, car group Volkswagen sliding 23.6pc and Deutchse Bank falling 20.2pc so far this year.

Meanwhile, things in Japan appear to be going from bad to worse.

The government of Japan is more than a quadrillion yen in debt, and it has been furiously printing money and debasing the yen in a desperate attempt to get the Japanese economy going again.

Unfortunately for them, it is simply not working.  The revised economic numbers for the second quarter were absolutely disastrous.  The following comes from a Japanese news source…

On an annualized basis, the GDP contraction was 7.1 percent, compared with 6.8 percent in the preliminary estimate. That makes it the worst performance since early 2009, at the height of the global financial crisis.

The blow from the first stage of the sales tax hike in April extended into this quarter, with retail sales and household spending falling in July. The administration signaled last week that it is prepared to boost stimulus to help weather a second stage of the levy scheduled for October 2015.

Private consumption was meanwhile revised to a 5.1 percent drop from the initial reading of 5 percent, meaning it sank 19 percent on an annualized basis from the previous quarter, rather than the initial estimate of 18.7 percent, Monday’s report said.

For the moment, things are looking pretty good in the United States.

But as I have written about so many times, our financial markets are perfectly primed for a fall.

As I did in 2000 and 2007, I feel obligated to state an expectation that only seems like a bizarre assertion because the financial memory is just as short as the popular understanding of valuation is superficial: I view the stock market as likely to lose more than half of its value from its recent high to its ultimate low in this market cycle.

At present, however, market conditions couple valuations that are more than double pre-bubble norms (on historically reliable measures) with clear deterioration in market internals and our measures of trend uniformity. None of these factors provide support for the market here. In my view, speculators are dancing without a floor.

And it isn’t just stocks that could potentially be on the verge of a massive decline.  The bond market is also experiencing an unprecedented bubble right now.  And when that bubble bursts, the carnage will be unbelievable.  This has become so obvious that even CNBC is talking about it…

Picture this: The bond market gets spooked by a sudden interest rate scare, sending a throng of buyers streaming toward the exits, only to find a dearth of buyers on the other side.

As a result, liquidity evaporates, yields soar, and the U.S. finds itself smack in the middle of another debt crisis no one saw coming.

It’s a scenario that TABB Group fixed income head Anthony J. Perrotta believes is not all that far-fetched, considering the market had what could be considered a sneak preview in May 2013. That was the “taper tantrum,” which saw yields spike and stocks sell off after then-Federal Reserve Chairman Ben Bernanke made remarks that the market construed as indicating rates would rise sooner than expected.

If the strength of our financial markets reflected overall strength in the U.S. economy there would not be nearly as much cause for concern.

But at this point our financial markets have become completely and totally divorced from economic reality.

The truth is that our economic fundamentals continue to decay.  In fact, the IMF says that China now has the largest economy on the planet on a purchasing power basis.  The era of American economic dominance is ending.  It is just that the financial markets have not gotten the memo yet.

Hopefully we still have at least a few more months before stock markets all over the world start crashing.  But remember, we are entering the seventh year of the seven year cycle of economic crashes that so many people are talking about these days.  And we are definitely primed for a global financial collapse.