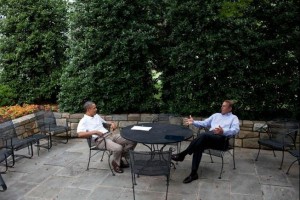 Barack Obama and John Boehner both seem absolutely determined to drive U.S. government finances off a cliff.  The mainstream media would have you believe that there are vast ideological differences between the two of them and that they are bitter enemies, but that is simply not the case.  Both of them say that tax increases are “necessary”, but they disagree over the details.  Both are seeking about a trillion dollars of spending cuts and about a trillion dollars of new “revenue”, but they don’t see eye to eye on how to get there.  But overall, they are both definitely playing in the same ballpark.  And those numbers certainly do sound impressive until you realize that they are talking about a time span of ten years.  Personally, I would love to see federal spending cut by a trillion dollars this year.  But that will never happen.  A trillion dollars over the course of a decade breaks down to about 100 billion dollars per year.  That still sounds like a lot of money until you put it up next to the trillion dollar deficits that we have been running for four years in a row.  Even if somehow those spending cuts turned out to be real (which they aren’t), they would still only put a very small dent in our yearly budget deficits.  Obama and Boehner both want to continue to have a gigantic federal government that showers people with government money, and both of them want to continue to pass much of the burden for paying for this gigantic government on to future generations.  And both of them want to continue to steal more than 100 million dollars an hour from our children and our grandchildren in order to maintain the false bubble of debt-fueled prosperity that we are enjoying right now.  This is incredibly foolish and they are leading us down a path that will lead to national ruin.

Sadly, even the pathetically small “budget cut” and “new revenue” figures that they are floating around turn out to be quite hollow when you inspect them more closely.

For example, the “new revenue” figures that both Obama and Boehner are talking about rely on extremely unrealistic assumptions about U.S. economic growth.  In order to meet their revenue projections, the U.S. economy would need to grow significantly faster than it is right now and we would need to get through the entire decade without having a single recession.

What do you think the chance of that happening is?

But that is the way that things work in Washington D.C. – our politicians function in a world where it is assumed that everything will work out just perfectly in the future.

For example, if the figures put out at the beginning of the Bush administration were to be believed, we should be absolutely swimming in government surpluses by now.

That didn’t work out too well, did it?

The “spending cuts” are even more illusory.

Obama is projecting that we will save 130 billion dollars by manipulating the way that inflation is calculated for annual increases in Social Security benefits.

But our politicians are already pretending that there is hardly any inflation when any rational person can see that prices are soaring.

So can they really manipulate the numbers to make them look even smaller?

By doing so, they would be cheating elderly Americans out of 130 billion dollars.  But I guess this is more convenient for our politicians than going after real government waste.

Obama also plans to save $290 billion by having lower interest payments on U.S. government debt.

The average rate of interest on U.S. government debt was 2.534 percent at the end of November.  That is ridiculously low.  The only place it is going to go in future years is up.

So Obama’s projection that we are going to save 290 billion dollars over the next ten years by forcing interest rates on U.S. government debt even lower is insanely optimistic.  Only a delusional person would make such an assumption.

And most of the savings from the “projected spending cuts” that Obama and Boehner are proposing would not happen until later in the decade.

After all, they don’t want to “hurt the economy” right now.

In fact, Obama is actually proposing that we should increase spending by $80 billion this year so that we can encourage economic activity.

So don’t let anyone fool you with any nonsense about how Obama and Boehner are working on a plan that would get U.S. government finances in order.

No matter how their “negotiations” turn out, we will continue to run trillion dollars deficits year after year with no end in sight.

If Americans want a monstrous federal government that passes out government checks like candy, then they should pay for it.  Personally, I think that taxes are already way, way too high and that the government already brings in more than enough money.

If Americans don’t want to pay much higher taxes, then they should tell the government to quit spending money that we don’t have.

But all of this trying to have it both ways has got to stop.  We are destroying the future for our children and our grandchildren.  We have already run up 16 trillion dollars in debt and we can’t even seem to slow down our reckless debt binge.  If they get the chance, someday future generations will curse us for what we did to them.

The funny thing is that John Boehner was supposed to be a “conservative” that was going to do something about all of this debt.  But since John Boehner has been Speaker of the House, the U.S. House of Representatives has approved legislation that has increased the size of our national debt by approximately $18,944 per household.

For example, did you know that there are now more than one million homeless students in America?  Sadly, it’s true…

The number of homeless students in America topped one million for the first time last year as a result of the economic recession, a number that has risen 57 percent since 2007.

The US Department of Education found that of these 1,065,794 children, many lived in abandoned homes, cheap hotels, stations, church basements and hospitals. Some spent their time sleeping over at the houses of various friends whenever they could. Others fell victim to drugs and sexual abuse, in some cases trading sexual acts for food, clothing and shelter or selling illegal drugs.

Even in the midst of our debt-fueled prosperity, the number of Americans that are dependent on the government just continues to rise.

According to one recent survey, 55 percent of all Americans have received money from a safety net program run by the federal government at some point in their lives.

So how bad will things get when we eventually quit borrowing so much money and we start living within our means?

Nobody is looking forward to that day.  Certainly not our politicians.  They don’t want to be blamed for all of the painful adjustments that will happen once the party ends.

So they just keep borrowing and spending.  But at some point the music will stop and the house of cards will come crashing down.

It won’t happen this week or this month, but it will happen soon enough. 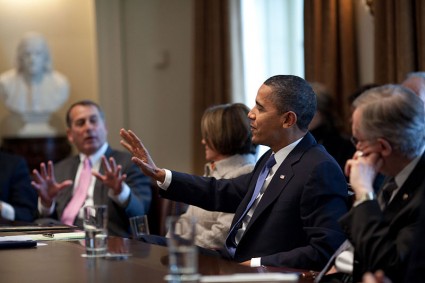