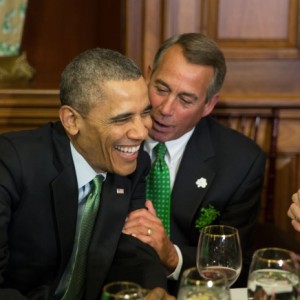 The American people are increasingly waking up to the fact that nothing ever seems to change in Washington D.C. no matter which political party is in power.  In fact, as you will see later on in this article, an all-time high 53 percent of all Americans believe that neither party “represents the American people”.  Over the past several decades, we have sent a Bush, a Clinton, another Bush and an Obama to the White House, but the policies coming out of Washington have remained pretty much the same the entire time.  The mainstream media would have us believe that the Republicans and the Democrats are constantly fighting like cats and dogs, but the truth is that the Republicans want to take us to the same place that the Democrats want to take us – just a little more slowly perhaps.  And behind the scenes, Republicans and Democrats have a good time with one another and they are ultimately controlled by the same set of oligarchs.  The Americans people are really starting to recognize what a sham our system has become, and the numbers show that they are quite fed up with it.

I truly wish that things were different.  When I was much younger, I was actively involved in politics and I enthusiastically campaigned for certain candidates.  But then when they got to Washington D.C., they never did most of the things that they promised to do during their campaigns.

I was quite bewildered by this.  At the time, I concluded that we just needed to send even more “good politicians” to D.C. and then things would finally turn around.

But things never did turn around.  No matter which party had the upper hand, the same garbage continued to spew forth from Washington.

Ultimately, like millions of other Americans, I have come to see that there is not really much of a difference between Barack Obama, Hillary Clinton, Harry Reid and Nancy Pelosi on one side, and John Boehner, John McCain, Mitch McConnell and Jeb Bush on the other side.

Sure, if you listen to their campaign speeches you might be tempted to think that they were polar opposites, but when you watch what they actually do there is not that much that really separates them.

Fortunately, large numbers of Americans are starting to see through this disgusting charade.  Most of our politicians are con men that tell us what we want to hear during their campaigns, and then after they are elected they forget all about us.  Dissatisfaction with these politicians has risen to unprecedented levels in recent years, and that could be a good thing.  The following are 12 numbers which prove that Americans are sick and tired of politics as usual…

#1 A national Rasmussen Reports survey has found that an all-time high 53 percent of all Americans believe that neither major political party “represents the American people”.

#2 According to a Real Clear Politics average of national polls, only 29 percent of Americans believe that the country is heading in the right direction.

#3 According to a Real Clear Politics average of national polls, Americans disapprove of the job that Barack Obama is doing by a 52.2 to 43.7 percent margin.

#4 According to a Real Clear Politics average of national polls, Americans disapprove of the job that Congress is doing by a 77.6 percent to 14.2 percent margin.

#5 52 percent of Americans “do not think the economy is fair to those willing to work hard”.

#6 65 percent of Americans are dissatisfied “with the U.S. system of government and its effectiveness”.  That is the highest level of dissatisfaction that Gallup has ever recorded.

#7 Only 4 percent of Americans believe that it would “change Congress for the worse” if every member was voted out during the next election.

#11 60 percent of Americans report feeling “angry or irritable”.  Two years ago that number was at 50 percent.

#12 70 percent of Americans do not have confidence that the federal government will “make progress on the important problems and issues facing the country in 2014”.

Of course at the heart of much of this dissatisfaction is the continuing problems in our economy.  For example, check out the Gallup daily employment tracking survey that you can find right here.  As you can see, the payroll to population number (those Americans working 30 hours a week or more) has been flatlining in the low forties for more than four years now.  The truth is that there never has been an employment recovery in this nation since the last recession. For much more on all this, please see my previous article entitled “This Is What Employment In America Really Looks Like…”

No wonder so many Americans are so angry.  Things are not nearly as good as they used to be.

Unfortunately, even though so many people are angry and frustrated, there is very little consensus on the solutions to our problems.

Many Americans even want to throw out the principles that this country was founded upon entirely.  For example, one recent survey discovered that 59 percent of all Americans believe that the U.S. Constitution is “outdated”.

That is a very chilling number.  We live at a time when Americans are becoming increasingly ignorant about who we are, where we came from and how we get here.

In the final analysis, it is hard to be optimistic about a political solution to any of our major problems in the near future.  Most of our politicians are deeply corrupt, the American people are incredibly angry and are deeply divided, and the vast majority of campaigns for federal office are won by the candidate that raises the most money.

But perhaps there is something that I am missing.  So what do you think?  Do you believe that there is hope that we can get Washington D.C. turned around in the near future?  Please feel free to share your thoughts by posting a comment below…