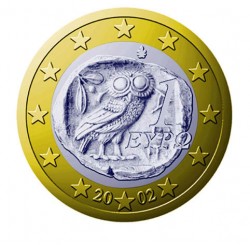 What was considered unthinkable a few months ago has now become probable.  All over the globe there are headlines proclaiming that a Greek exit from the euro is now a real possibility.  In fact, some of those headlines make it sound like it is practically inevitable.  For example, Der Spiegel ran a front page story the other day with the following startling headline: “Acropolis, Adieu! Why Greece must leave the euro”.  Many are saying that the euro will be stronger without Greece.  They are saying things such as “a chain is only as strong as its weakest link” and they are claiming that financial markets are now far more prepared for a “Grexit” than they would have been two years ago.  But the truth is that it really is naive to think that a Greek exit from the euro can be “managed” and that business will go on as usual afterwards.  If Greece leaves the euro it will set a very dangerous precedent.  The moment Greece exits the euro, investors all over the globe will be asking the following question: “Who is next?”  Portugal, Italy and Spain would all see bond yields soar and they would all likely experience runs on their banks.  It would only be a matter of time before more eurozone members would leave.  In the end, the whole monetary union experiment would crumble.

As I have written about previously, New York Times economist Paul Krugman is wrong about a whole lot of things, but in a blog post the other day he absolutely nailed what is likely to soon unfold in Greece….

2. Huge withdrawals from Spanish and Italian banks, as depositors try to move their money to Germany.

3a. Maybe, just possibly, de facto controls, with banks forbidden to transfer deposits out of country and limits on cash withdrawals.

3b. Alternatively, or maybe in tandem, huge draws on ECB credit to keep the banks from collapsing.

4a. Germany has a choice. Accept huge indirect public claims on Italy and Spain, plus a drastic revision of strategy — basically, to give Spain in particular any hope you need both guarantees on its debt to hold borrowing costs down and a higher eurozone inflation target to make relative price adjustment possible; or:

By itself, Greece cannot crash the eurozone.  But the precedent that Greece is about to set could set forth a chain of events that may very well bring about the end of the eurozone.

When the euro was initially created, monetary union was intended to be irreversible.  There are no provisions for what happens if a member nation wants to leave the euro.  It simply was not even conceived of at the time.

So we are really moving into uncharted territory.  A recent Bloomberg article attempted to set forth some of the things that might happen if a Greek exit from the euro becomes a reality….

A Greek departure from the euro could trigger a default-inducing surge in bond yields, capital flight that might spread to other indebted states and a resultant series of bank runs. Although Greece accounts for 2 percent of the euro-area’s economic output, its exit would fragment a system of monetary union designed to be irreversible and might cause investors to raise the threat of withdrawal by other states.

In fact, yields on Spanish debt and Italian debt are already rising rapidly thanks to the bad news out of Greece in recent days.

What makes things worse is that a new government has still not formed in Greece.  It looks like new elections may have to be held in June.

Meanwhile, the Greek government is rapidly running out of money.  The following is from a Bank of America report that was released a few days ago….

“If no government is in place before June when the next installment (of loan money) from the European Union and International Monetary Fund is due, we estimate that Greece will run out of money sometime between the end of June and beginning of July, at which point a return to the drachma would seem inevitable”

In the recent Greek elections, parties that opposed the bailout agreements picked up huge gains.  And opinion polls suggest that they will make even larger gains if another round of elections is held.

The Coalition of the Radical Left, also known as Syriza, surprised everyone by coming in second in the recent elections.  Current polling shows that Syriza is likely to come in first if new elections are held.

A spokesman for Syriza, Yiannis Bournos, recently told the Telegraph the following….

“Mr Schaeuble [Germany’s finance minister] is pretending to be the fearless cowboy on the radio, saying the euro is secure [against a Greek exit]. But there’s no way they will kick us out”

So Greece and Germany are playing a game of chicken.

Who will blink first?

Will either of them blink first?

Syriza is trying to convince the Greek people that they can reject austerity and stay in the euro.  Syriza insists that the rest of Europe will provide the money that they need to pay their bills.

And most Greeks do actually want to stay in the euro.  One recent poll found that 78.1 percent of all Greeks want Greece to remain in the eurozone.

But a majority of Greeks also do not want anymore austerity.

Unfortunately, it is not realistic for them to assume that they can have their cake and eat it too.  If Greece does not continue to move toward a balanced budget, they will lose their aid money.

And if Greece loses that aid money, the consequences will be dramatic.

Outgoing deputy prime minister of Greece Theodoros Pangalos recently had the following to say about what would happen if Greece doesn’t get the bailout money that it needs….

“We will be in wild bankruptcy, out-of-control bankruptcy. The state will not be able to pay salaries and pensions. This is not recognised by the citizens. We have got until June before we run out of money.”

If Greece gets cut off and runs out of money, it will almost certainly be forced to go back to using the drachma.  If that happens there will likely be a “bank holiday”, the borders will be secured to limit capital flight and new currency will be rapidly printed up.  It would be a giant mess.

In fact, there are rumblings that the European financial system is already making preparations for all this.  For example, a recent Reuters article had the following shock headline: “Banks prepare for the return of the drachma”

But a new drachma would almost certainly crash in value almost immediately as a recent article in the Telegraph described….

Most economists think that a new, free-floating drachma would immediately crash by up to 50 percent against the euro and other currencies, effectively halving the value of everyone’s savings and spelling catastrophe for those on fixed incomes, like pensioners.

A Greek economy that is already experiencing a depression would get even worse.  The Greek economy has contracted by 8.5 percent over the past 12 months and the unemployment rate in Greece is up to 21.8 percent.  It is hard to imagine what Greece is going to look like if things continue to fall apart.

But the consequences for the rest of Europe (and for the rest of the globe) would be dramatic as well.  A Greek exit from the euro could be the next “Lehman Brothers moment” and could plunge the entire global financial system into another major crisis.

Unfortunately, at this point it is hard to imagine a scenario in which the eventual break up of the euro can be avoided.

Germany would have to become willing to bail out the rest of the eurozone indefinitely, and that simply is not going to happen.

So there is a lot of pessimism in the financial world right now.  Nobody is quite sure what is going to happen next and the number of short positions is steadily rising as a recent CNN article detailed….

After staying quiet at the start of the year, the bears have come roaring back with a vengeance.

Short interest — a bet on stocks turning lower — topped 13 billion shares on the New York Stock Exchange at the end of last month. That’s up 4% from March and marks the highest level of the year.

If the eurozone is going to survive, Greece must stay a part of it.

Instead of removing the weakest link from the chain, the reality is that a Greek exit from the euro would end up shattering the chain.

Confidence is a funny thing.  It can take decades to build but it can be lost in a single moment.

If Greece leaves the euro, investor confidence in the eurozone will be permanently damaged.  And when investors get spooked they don’t behave rationally.

A common currency in Europe is not dead by any means, but this current manifestation is now operating on borrowed time.

As the eurozone crumbles, it is likely that Germany will simply pull the plug at some point and decide to start over. 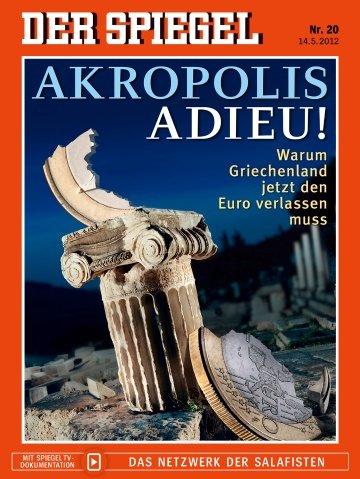