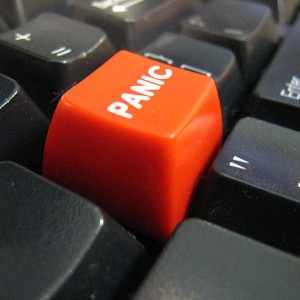 U.S. financial markets are exhibiting the classic behavior patterns of an addict.  Just a hint that the Fed may start slowing down the flow of the “juice” was all that it took to cause the financial markets to throw an epic temper tantrum on Wednesday.  In fact, one CNN article stated that the markets “freaked out” when Federal Reserve Chairman Ben Bernanke suggested that the Fed would eventually start tapering the bond buying program if the economy improves.  And please note that Bernanke did not announce that the money printing would actually slow down any time soon.  He just said that it may be “appropriate to moderate the pace of purchases later this year” if the economy is looking good.  For now, the Fed is going to continue wildly printing money and injecting it into the financial markets.  So nothing has actually changed yet.  But just the suggestion that this round of quantitative easing would eventually end if the economy improves was enough to severely rattle Wall Street on Wednesday.  U.S. financial markets have become completely and totally addicted to easy money, and nobody is quite sure what is going to happen when the Fed takes the “smack” away.  When that day comes, will the largest bond bubble in the history of the world burst?  Will interest rates rise dramatically?  Will it throw the U.S. economy into another deep recession?

Judging by what happened on Wednesday, the end of Fed bond buying is not going to go well.  Just check out the carnage that we witnessed…

-The Dow dropped by 206 points on Wednesday.

-The yield on 10 year U.S. Treasuries shot up substantially, and it is now the highest that it has been since March 2012.

-On Wednesday we witnessed the largest percentage rise in the yield on 5 year U.S. Treasury bonds ever.  It is now the highest that it has been in nearly two years.

-It was announced that mortgage rates are the highest that they have been in more than a year.

-We also learned that the MBS mortgage refinance applications index has fallen by 38 percent over the past six weeks.

If the markets react like this when the Fed doesn’t even do anything, what are they going to do when the Fed actually starts cutting back the monetary injections?

Posted below is an excerpt from the statement that the Fed released on Wednesday.  Please note that the Fed is saying that the current quantitative easing program is going to continue at the same pace for right now…

The Committee will closely monitor incoming information on economic and financial developments in coming months. The Committee will continue its purchases of Treasury and agency mortgage-backed securities, and employ its other policy tools as appropriate, until the outlook for the labor market has improved substantially in a context of price stability. The Committee is prepared to increase or reduce the pace of its purchases to maintain appropriate policy accommodation as the outlook for the labor market or inflation changes. In determining the size, pace, and composition of its asset purchases, the Committee will continue to take appropriate account of the likely efficacy and costs of such purchases as well as the extent of progress toward its economic objectives.

To support continued progress toward maximum employment and price stability, the Committee expects that a highly accommodative stance of monetary policy will remain appropriate for a considerable time after the asset purchase program ends and the economic recovery strengthens. In particular, the Committee decided to keep the target range for the federal funds rate at 0 to 1/4 percent and currently anticipates that this exceptionally low range for the federal funds rate will be appropriate at least as long as the unemployment rate remains above 6-1/2 percent, inflation between one and two years ahead is projected to be no more than a half percentage point above the Committee’s 2 percent longer-run goal, and longer-term inflation expectations continue to be well anchored. In determining how long to maintain a highly accommodative stance of monetary policy, the Committee will also consider other information, including additional measures of labor market conditions, indicators of inflation pressures and inflation expectations, and readings on financial developments. When the Committee decides to begin to remove policy accommodation, it will take a balanced approach consistent with its longer-run goals of maximum employment and inflation of 2 percent.

So why doesn’t the Federal Reserve just stop these emergency measures right now?

After all, we are supposed to be in the midst of an “economic recovery”, right?

What is Bernanke afraid of?

That is a question that Rick Santelli of CNBC asked on Wednesday.  If you have not seen his epic rant yet, you should definitely check it out…

On days like this, it is easy to see who has the most influence over the U.S. economy.  The financial world literally hangs on every word that comes out of the mouth of Federal Reserve Chairman Ben Bernanke.  The same cannot be said about Barack Obama or anyone else.

The central planners over at the Federal Reserve are at the very heart of what is wrong with our economy and our financial system.  If you doubt this, please see this article: “11 Reasons Why The Federal Reserve Should Be Abolished“.  Bernanke knows that the actions that the Fed has taken in recent years have grossly distorted our financial system, and he is concerned about what is going to happen when the Fed starts removing those emergency measures.

Unfortunately, we can’t send the U.S. financial system off to rehab at a clinic somewhere.  The entire world is going to watch as our financial markets go through withdrawal.

The Fed has purposely inflated a massive financial bubble, and now it is trying to figure out what to do about it.  Can the Fed fix this mess without it totally blowing up?

Unfortunately, most severe addictions never end well.  In a recent article, Charles Hugh Smith described the predicament that the Fed is currently facing quite eloquently…

One of the enduring analogies of the Federal Reserve’s quantitative easing (QE) program is that the stock market is now addicted to this constant injection of free money. The aptness of this analogy has never been more apparent than now, as the market plummets on the mere rumor that the Fed will cut back its monthly injection of financial smack. (The analogy typically refers to crack cocaine, due to the state of delusional euphoria QE induces in the stock market. But the zombified state of the heroin addict is arguably the more accurate analogy of the U.S. stock market.)

You know the key self-delusion of all addiction: “I can stop any time I want.” This eerily echoes the language of Fed Chairman Ben Bernanke, who routinely declares he can stop QE any time he chooses.

But Ben, the pusher of QE money, knows his addict–the stock market–will die if the smack is cut back too abruptly. Like all pushers, Ben has his own delusion: that he can actually control the addiction he has nurtured.

You’re dreaming, Ben–your pushing QE has backed you into a corner. The addict (the stock market) is now so dependent and fragile that the slightest decrease in QE smack will send it to the emergency room, and quite possibly the morgue.

The Fed is desperately hoping that it can find a way to engineer some sort of a soft landing.

The Fed is desperately hoping to avoid a repeat of the financial crisis of 2008.

Federal Reserve Chairman Ben Bernanke insists that he knows how to handle things this time.