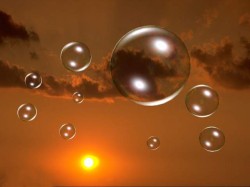 What is the biggest economic problem that the United States is facing?  Very simply, our biggest problem is that we have way too much debt.  Over the past 30 years, household debt, corporate debt and government debt have all grown much faster than our GDP has.  But no nation on earth has ever been able to expand debt much faster than national output indefinitely.  All debt bubbles eventually burst.  Right now, we are living in the greatest debt bubble in the history of the world.  All of this debt has fueled a “false prosperity” which has enabled many Americans to live like kings and queens.  But no nation (or household) can pile on more debt forever.  At some point the weight of the debt becomes just too great.  It is amazing that the United States has been able to pile up as much debt as it has.  Over the years, many authors have predicted that U.S. government finances would collapse long before the U.S. national debt ever got to this level.  So the mountain of debt that we have accumulated is quite an “achievement” if you want to look at it that way.  But the clock is ticking on this debt bubble and when it collapses we will say “bye bye” to our vastly inflated standard of living and we will discover that we have destroyed the economy for all future generations of Americans.

Sometimes a picture is worth a thousand words.  When most Americans think of the “debt problem” in this country, they think of the debt of the federal government.

But that is not the only debt bubble that we are facing.

Thirty years ago, household debt in the United States was approaching the 2 trillion dollar mark.  Today, it is sitting at about 13 trillion dollars…. 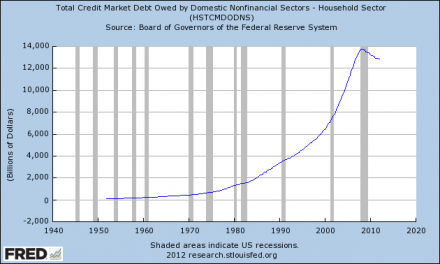 We have been trained to pay for everything with debt.

We pay for our homes with debt, and mortgage debt as a percentage of GDP has more than tripled since 1955.

We pay for our cars with debt, and at this point about 70 percent of all auto purchases in the United States involve an auto loan.

We pay for higher education with debt, and the total amount of student loan debt in America recently surpassed the one trillion dollar mark.

Wherever we go we pay with plastic.

If you want a heated cat bed and a cute little cat sweater for your little kitty just put it on your Visa or Mastercard.

Amazingly, consumer debt in America has risen by a whopping 1700% since 1971, and if you can believe it, 46% of all Americans carry a credit card balance from month to month.

We are absolutely addicted to debt and we do not know how to stop.

Our state and local governments are also addicted to debt. 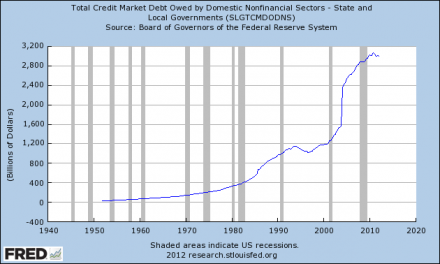 In the United States today, we don’t just have one “government debt problem” – the truth is that we have hundreds of them.  All over the country, state and local governments are facing bankruptcy because of too much debt.

For example, according to Fox News the city of Stockton, California is right on the verge of declaring bankruptcy.  In fact, an announcement could come as early as this week….

Stockton, Calif., is set to declare bankruptcy as early as this week, according to local officials, a move that would make it one of the largest U.S. cities ever to file for reorganization.

On Monday, a state-required mediation with creditors to find a fiscal solution is scheduled to expire. Stockton’s City Council is then slated to meet Tuesday to decide whether to adopt a budget for operating in bankruptcy, a move widely considered the last step before the city formally submits a Chapter 9 petition to federal bankruptcy court.

Of course the biggest offender of all is the federal government.  30 years ago, Ronald Reagan was running around proclaiming what a nightmare it was that the U.S. national debt was reaching the one trillion dollar mark.

Well, now we are about to blast through the 16 trillion dollar mark with no end in sight…. 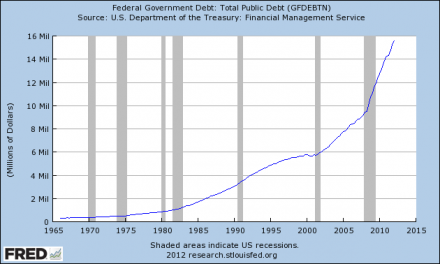 Running up debt at a much faster rate than our GDP is rising is a recipe for national financial suicide.  Our politicians continue to steal about 150 million dollars an hour from future generations and everybody just acts like this is perfectly normal.

We are going down the same path that Greece, Portugal, Italy, Ireland and Spain have gone.

In fact, we already have more government debt per capita than all of those nations do.

Both political parties have been doing this to us, and it just keeps getting worse and worse.

Incredibly, the national debt has grown more under Obama in less than 4 years than it did under George W. Bush during his entire 8 year term.

Since Barack Obama entered the White House, we have accumulated more than five trillion dollars of additional debt.

We are on the road to national financial oblivion, and most Americans don’t seem to care.

Debt From Sea To Shining Sea

Now let’s add up all the debt in the country.  When you total up all household debt, business debt and government debt, it comes to more than 300% of our GDP…. 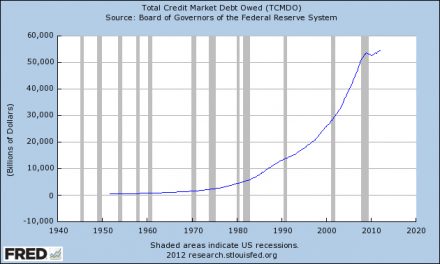 In fact, if current trends continue we will hit 400% of GDP before too long.

As you can see from the chart, there was a little “hiccup” during the last recession, but now the debt bubble is growing again.

So how high can it go before the entire system collapses?

Total credit market debt owed is roughly 10 times larger than it was about 30 years ago.

How in the world did we accumulate 10 times more debt in just 30 years?

Unfortunately, that is the way that debt spirals work.  They either have to keep expanding or they collapse.

So will the U.S. debt spiral continue to expand?

Or will we soon see a collapse?

Sadly, this exact same thing is happening all over the world.  The government debt to GDP ratio in Japan (the third largest economy in the world) blew past the 200% mark quite a while ago, and almost every country in the EU is absolutely drowning in debt.

The world has never faced anything quite like this.  There is way, way too much debt in the world, but the only way we can continue to enjoy this level of prosperity under the current system is to pile up a lot more debt.

The western world is like a debt addict in a deep state of denial.  Some debt addicts end up with dozens of credit card accounts.  They will keep opening more accounts as long as someone will let them.  Most debt addicts actually believe that they will be able to get out of the hole at some point, but most never do.

Sadly, what the mainstream media and the two major political parties are telling them is a bunch of lies.

We have enjoyed the greatest prosperity that we will ever see in the United States, and when the debt bubble bursts there is going to be an immense amount of pain.

That is a very painful truth, but it is better to come to grips with it now than be blindsided by it later. 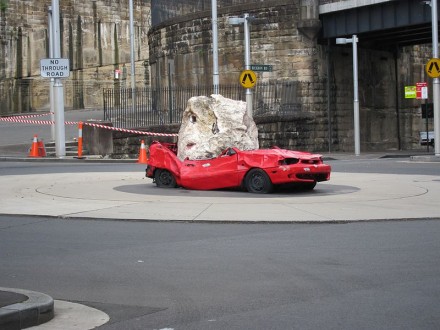