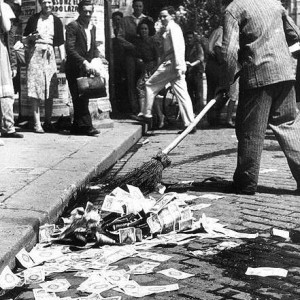 Prior to the financial crisis of 2007 and 2008, the Federal Reserve could always count on being able to stimulate the U.S. economy with a quick cut to interest rates.  But now with interest rates just barely above zero, the Federal Reserve is searching for other ways to pump life into a U.S. economy that is staggering about like a drunken college student.  One of the ways that the Federal Reserve can do this is through something called “quantitative easing”.  In essence, what happens is that the Federal Reserve creates money out of thin air and starts buying things like U.S. Treasuries, mortgage-backed securities and corporate debt.  But many economic analysts are now warning that further rounds of quantitative easing by the Federal Reserve could end up setting off a series of events that could ultimately unleash economic hell.  In fact, there are quite a few high profile commentators who now believe that hyperinflation in the United States is absolutely inevitable.

For those not familiar with quantitative easing, Wikipedia has a pretty good definition….

The term quantitative easing (QE) describes a form of monetary policy used by central banks to increase the supply of money in an economy when the bank interest rate, discount rate and/or interbank interest rate are either at, or close to, zero.[citation needed] A central bank does this by first crediting its own account with money it has created ex nihilo (“out of nothing”).[1] It then purchases financial assets, including government bonds, mortgage-backed securities and corporate bonds, from banks and other financial institutions in a process referred to as open market operations.

But is it really a good idea for a privately-owned central bank to have the power to create money out of nothing and to do whatever it wants with it outside of U.S. government control?

Of course not, but we dealt with those issues in another article.

What we will concern ourselves with in this article are the negative effects that could be unleashed as the Federal Reserve further abuses this power.

Now keep in mind that disasters don’t usually happen overnight.  They usually build over time.  When the Federal Reserve begins new rounds of quantitative easing, it will take time for the effects to be felt.

And so far, the new quantitative easing measures that the Federal Reserve has implemented have been relatively mild….

*The Federal Reserve has also announced that it has decided to reinvest principal payments on mortgage holdings into U.S. Treasury securities.

*The Federal Reserve Bank of New York announced on Wednesday that it will purchase $18 billion in U.S. Treasury securities between now and mid-September.

But most analysts are expecting quantitative easing by the Fed to accelerate – especially if the U.S. economy continues to flounder.

So is there a reason we should be concerned about all of this?

Marc Faber, the author of “The Gloom, Boom and Doom Report”, recently warned CNBC that all of this intervention by the Federal Reserve is going to create a “final crisis” that will destroy the U.S. financial system….

“Investors should have listened to me already six months ago when I wrote that the Fed will continue to monetize … they will print and print and print until the final crisis wipes out the whole system.”

In a recent article, Bob Chapman of the International Forecaster described some of the financial gymnastics that our “financial authorities” go through just to keep the current shell game going….

But first, we ignore things like monthly hundred billion plus mathematical discrepancies between the amount of the government’s deficits and the amount of treasury bonds being sold.  Then we give the proceeds from the bogus excess treasury sales to foreign countries, foreign central banks and sovereign wealth funds as well as Cayman Island hedge funds so they can do what with it?  Why, so they can buy US treasury paper and agency paper, among other things.  Yep, we set up the straw men, fund them with counterfeit money illegally created out of thin air beyond what is needed to fund the ever-increasing deficit being created by the drunken sailors running the US government, and we then magically create categories of new mega-buyers in our financial reports to show everyone how our treasury paper is just as “beloved” as in the old days.  Why, even the totally bankrupt UK has magically created $180 billion for the express purpose of buying up those treasuries to keep the whole rip-off party going.

What a mess they have created.

Things have gotten so bad that even CNN is publishing articles that openly acknowledge the crisis.  In a recent article on CNN entitled “Is This Finally The Economic Collapse?”, Keith R. McCullough warned that the Federal Reserve openly buying large amounts of U.S. government debt is a very dangerous threshold to cross….

Now that the US can’t cut interest rates any lower, the only option left on the table is what the Fed just announced it would start doing — buying Treasury debt. And that could lead the country to the brink of collapse: According to economists Carmen Reinhart & Ken Rogoff, whose views we share, crossing the 90% debt/GDP threshold is the equivalent of crossing the proverbial Rubicon of economic growth. It’s a point from which it’s almost impossible to return.

And that is the crux of the problem – the U.S. government has a debt that is absolutely spiralling out of control.  This is a problem that has been building for decades and there simply is no quick fix for it.

But the truth is that it was seen as far back as 1835.  In his article for CNN, Keith R. McCullough included a very appropriate quote by Alexis De Tocqueville, the author of Democracy in America….

“The American Republic will endure until the day Congress discovers that it can bribe the public with the public’s money.”

For decades, the “Congress critters” have been bribing the American people (and each other) with massive payouts and have been getting away with it.

But now we are starting to pay the price.

The truth is that the U.S. government has become an expert on wasting money.  Most of the folks populating Congress are so incompetent that they should not even be hired to mop the floors of a Dairy Queen, and yet they control how trillions of our tax dollars are spent.

The end result is that we have a financial mess that is absolutely unprecedented.

The U.S. financial system is doomed.  The U.S. government and the Federal Reserve will probably end up trying to save it with a massive flood of paper money, and in the end that will likely result in the collapse of the U.S. dollar and hyperinflation.

But hopefully all of that is still a while away yet.  For now, the Obama administration and the Federal Reserve are trying to play a very delicate balancing act and are trying to keep this giant house of cards from collapsing.

As incompetent as they are, let’s hope that they can keep things together for at least a while longer, because when things really fall apart we are all going to be feeling the pain.