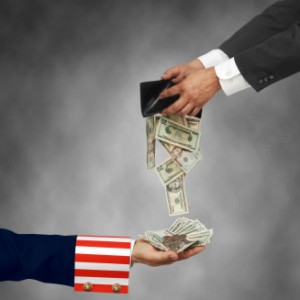 Unless the U.S. Congress acts, there is going to be a massive wave of tax increases in 2011.  In fact, some are already calling 2011 the year of the tax increase.  A whole host of tax cuts that Congress established between 2001 and 2003 are set to expire in January unless Congress chooses to renew them.  But with Democrats firmly in control of both houses that appears to be extremely unlikely.  These tax increases are going to affect every single American (at least those who actually pay taxes).  But this will be just the first wave of tax increases.  Another huge slate of tax increases passed in the health care reform law is scheduled to go into effect by 2019.  So Americans that are already infuriated by our tax system are only going to become more frustrated in the years ahead.  The reality is that the U.S. government will soon be digging much deeper into our wallets.

The following are some of the tax increases that are scheduled to go into effect in 2011….

1 – The lowest bracket for the personal income tax is going to increase from 10 percent to 15 percent.

2 – The next lowest bracket for the personal income tax is going to increase from 25 percent to 28 percent.

6 – In 2011, the death tax is scheduled to return.  So instead of paying zero percent, estates of $1 million or more are going to be taxed at a rate of 55 percent.

7 – The capital gains tax is going to increase from 15 percent to 20 percent.

9 – The “marriage penalty” is also scheduled to be reinstated in 2011.

It is being estimated that the total cost of these tax increases to U.S. taxpayers will be $2.6 trillion through the year 2020.

But wait, there are even more tax increases coming.

The “health care reform law” contains over a dozen new taxes that will be implemented in stages over the next decade.  When you add all of these taxes to the taxes that were mentioned earlier, the result is going to be absolutely devastating.  According to an analysis by the Congressional Joint Committee on Taxation the health care reform law will generate $409.2 billion in additional taxes by the year 2019.

So is it any wonder why the public has such a low opinion of the U.S. Congress?

Every single major poll done on the topic shows that approval ratings for Congress are at record lows.

For example, Gallup’s 2010 Confidence in Institutions poll found Congress ranking dead last out of the 16 institutions rated this year.

Of course there are a whole host of reasons why the American people are upset with Congress, but one of the big ones is the fact that we are literally being taxed to death.

However, it is not just federal income taxes that are killing us.

In a previous article entitled “Taxed Enough Already!”, we listed just a few of the taxes that Americans have to pay each year….

Are you dizzy yet?

The reality is that the American people are being drained in dozens and dozens of different ways.

But what did you expect?

Did you think that our politicians would pile up the biggest debt in the history of the world and never ask you to pay for it?

Did you think that we could run deficits equivalent to about 10 percent of GDP without ever seeing tax increases?

The truth is that the U.S. government needs a whole lot more money than even these new tax increases will bring in.

After all, it is being projected that the U.S. government will be spending $2 trillion on the interest on the national debt alone by the year 2020.

To put that in perspective, the entire budget for the U.S. government is less than $4 trillion for 2010.

In the years ahead the IRS is going to be digging deeper and deeper into our pockets and a gigantic chunk of that money is going to go directly into the pockets of those who own our debt.

But very few Americans wanted to listen when this problem was actually somewhat fixable 20 or 30 years ago.

So now we are all going to pay the price – literally.