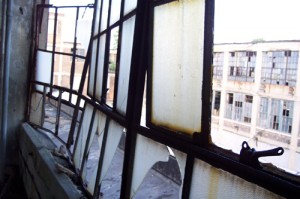 If you want to know what the future of America is going to be like, just look at the city of Detroit.  Once upon a time it was a symbol of everything that America was doing right, but today it has been transformed into a rotting, decaying, post-apocalyptic hellhole.  Detroit was once the fourth-largest city in the United States, and in 1960 Detroit had the highest per-capita income in the entire nation.  It was the greatest manufacturing city the world had ever seen, and the rest of the globe looked at Detroit with a sense of awe and wonder.  But now the city of Detroit has become a bad joke to the rest of the world.  Unemployment is rampant, 60 percent of the children are living in poverty and the city government is on the verge of bankruptcy.  They say that Detroit is just a matter of “weeks or months” away from running out of cash, and when Detroit does declare bankruptcy it will be the largest municipal bankruptcy in the history of the United States.  But don’t look down on Detroit, because the truth is that Detroit is really a metaphor for what is happening to America as a whole.  In the United States today, our manufacturing infrastructure has been gutted, poverty is absolutely exploding and we are rapidly approaching national bankruptcy.  Detroit may have gotten there first, but the rest of the country will follow soon enough.

Back during the boom years, Detroit was known for making great cars.  Today, it is known for scenes of desolation and decay.  It is full of vandalized homes, abandoned schools and empty factories.  The following description of what Detroit looks like at this point is from an article by Barry Yeoman…

So what caused the downfall of one of the greatest cities on earth?

Well, here is a hint…

Between December 2000 and December 2010, 48 percent of the manufacturing jobs in Michigan were lost.

When you are a manufacturing area, and you lose half of your manufacturing jobs over the course of a single decade, of course things are going to get really, really bad.

So just how bad have things gotten in Detroit?

#1 Detroit was once the fourth-largest city in the United States, and it was once home to close to 2 million people.  But over the last several decades people have been fleeing in droves.  According to the 2010 census, only 713,000 people now live in Detroit, and city officials admit that the population has probably slipped under 700,000 at this point.

#3 Today, Detroit is only the 18th-largest city in America.  It is now smaller than Austin, Texas and Charlotte, North Carolina.

#4 Back in 1960, the city of Detroit had the highest per-capita income in the United States.

#5 Today, the unemployment rate in Detroit is more than 18 percent, which is more than twice as high as the nation as a whole.

#6 According to a report that was just recently released, approximately 60 percent of all children in Detroit live in poverty.

#7 Approximately one-third of Detroit’s 140 square miles are either vacant or derelict.

#8 The city government of Detroit has closed dozens of schools and has decided to cut off public services to the “heavily blighted areas“.

#9 According to one estimate, there are 33,500 empty houses and 91,000 vacant residential lots in the city of Detroit today.

#11 There are more than 85,000 streetlights in Detroit, but thieves have stripped so much copper wiring out of the lights that more than half of them are not working.

#12 Mayor Bing has announced a plan to reduce the number of streetlights in the city of Detroit to just 46,000.

#13 According to one very shocking report, 47 percent of all people living in the city of Detroit are functionally illiterate at this point..

#14 The murder rate in Detroit is 11 times higher than it is in New York City.

#16 Justifiable homicide in Detroit rose by an astounding 79 percent during 2011.

#17 In one recent year, the rate of self-defense killings in the city of Detroit was 2200% above the national average.

#18 Ten years ago, there were approximately 5,000 police officers in the city of Detroit.  Today, there are only about 2,500 and another 100 are scheduled to be eliminated from the force soon.

#19 Due to budget cutbacks, most police stations in Detroit are now closed to the public for 16 hours a day.

#20 Crime has gotten so bad in Detroit that even the police are are telling people to “enter Detroit at your own risk“.

#21 At one point, 100 bus drivers in Detroit refused to drive their routes because they were afraid of being attacked out on the streets in broad daylight.  The head of the bus drivers union, Henry Gaffney, said that the drivers were literally “scared for their lives“….

#22 There have been reports that gangs of young men with AK-47s have been terrorizing gas stations all over Detroit.

#23 Detroit was once known for making some of the greatest cars in the world.  Now, it is known around the world as a dumping ground for the dead…

From the street, the two decomposing bodies were nearly invisible, concealed in an overgrown lot alongside worn-out car tires and a moldy sofa. The teenagers had been shot, stripped to their underwear and left on a deserted block.

#24 Detroit’s public schools are an absolute nightmare.  The following is from one of my readers that actually attended one of the “best” public schools in Detroit…

The school was a new seven story building just a couple of years old. The bathrooms would often lack toilet paper & soap beyond the second floor (the main floor), the bathroom sinks would often not work. The water fountains on north side of the building on from the third floor & up did not work. The elevators would constantly break down. I even got stuck on the elevator before. I almost tripped down a half a flight of stairs because the elastic seal (it was the metal bar at the front of a treader of I don’t know the name of it.) the stairs was not properly installed.

Even over in Europe they write stories about the dramatic decline of Detroit.  For example, the following is how one British reporter described his visit to Detroit…

For those that want to read even more about the horrifying downfall of Detroit, there are some amazing charts that graphically show the decline of Detroit right here.

How can we fix Detroit?

Well, why don’t we just build a monorail!  Of course that sounds ridiculous, but the federal government has actually committed $25 million to construct “a streetcar line” that nobody really wants and that very few people would probably actually use.  Perhaps they could be excused for wasting so much money on a bad idea if there had not already been 24 failed attempts to develop a successful public transit system in Detroit over the past four decades.

Well, why don’t we just build a bunch of theme parks instead?  After all, tourists would just flock to Detroit, right?

It has been suggested that Detroit would be ideal for an “automotive theme park”, and there is actually one group of investors that wants to turn some of the worst areas of Detroit into a “zombie theme park”.

What will they think of next?

Actually, a much better idea would have been to not allow millions of our good paying manufacturing jobs to be shipped to the other side of the world, but it is too late for that at this point.

The truth is that the entire U.S. economy is in an advanced state of decline…

-The percentage of the civilian labor force in the United States that is employed has been steadily declining every single year since 2006.

-Amazingly, there are hundreds of thousands of Americans with either Master’s degrees or Ph.D.s that are enrolled in the food stamp program at this point.

Yes, Detroit may have gone over the edge into economic oblivion first, but the rest of the nation is steamrolling down the exact same path that Detroit has gone.

Is it too late for us to change direction? 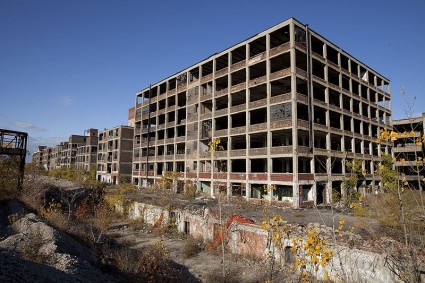