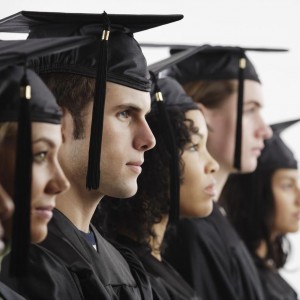 Hundreds of thousands of college students all over the United States have just graduated and are getting ready for their first taste of the real world.  Unfortunately for them, the real world is not always easy and it is not always fair.  In fact, for large numbers of recent college graduates, the transition to a world of high unemployment, brutal student loan payments and lowered expectations can be extremely sobering.  But the truth is that we have taught these young people to have a completely unrealistic view of the future.  We have told them to take out gigantic student loans without worrying about how they are going to pay them back, we have told them that if they get good grades and do everything “right” that the system will reward them with secure, fulfilling careers, and we have made high school and college so “soft and cushy” that most of these young Americans find that they don’t have the discipline and the work ethic to make it when they actually do get out into society.

So needless to say, the first six months after graduation can be a complete shock for many college graduates.

In a piece recently published on MSN Money, journalist Joe Queenan described the tough environment that 2010 college graduates are being thrown into as they enter the real world….

They will enter an economy where roughly 17% of people aged 20 through 24 do not have a job, and where two million college graduates are unemployed. They will enter a world where they will compete tooth and nail for jobs as waitresses, pizza delivery men, file clerks, bouncers, trainee busboys, assistant baristas, interns at bodegas.

But waiting tables, delivering pizzas or greeting customers at the local Wal-Mart is not what most college graduates signed up for when they invested tens of thousands of dollars and four years (if not longer) of their lives in an education.

Unfortunately, that is where our economy is at today.

“Good jobs” are very few and far between and those freshly graduating from college are finding themselves suddenly thrust into an extremely competitive job market.

According to the Bureau of Labor Statistics, in March the national rate of unemployment in the U.S. was 9.7%, but for Americans younger than 25 years of age it was 18.8%.

In fact, according to a recent Pew Research Center study, approximately 37% of all Americans between the ages of 18 and 29 have either been unemployed or underemployed at some point during this recession.

But what makes things even worse for college graduates is that so many of them are coming out of school with absolutely crushing student debt loads.

But it isn’t just that they have student loans.  The loan balances that many of these students are graduating with these days are absolutely obscene.

The Project on Student Debt estimates that 206,000 U.S. college students graduated with more than $40,000 in student loan debt in 2008.  Using 2008 dollars as a baseline, that represents a ninefold increase over the number of students graduating with that amount of debt in 1996.

Most college students don’t think much about all of the debt that they are accumulating while they are in school.

But once they get out, the sudden realization that they have gotten themselves into student loan payments that they cannot possibly handle can be completely demoralizing.

The New York Times recently profiled Cortney Munna – a recent college graduate who has not been able to get a “good job” and who now finds herself in student loan hell.  She recently told the New York Times that she would be more than glad to give back her education if she could just get out of all this debt….

“I don’t want to spend the rest of my life slaving away to pay for an education I got for four years and would happily give back.”

In recent years, millions of young college graduates have found that the “great education” that they thought they were getting actually doesn’t get them very far at all in the real world.

In fact, they often find themselves taking jobs where they work right next to other people their age who never even went to college.

So a lot of young college graduates find themselves wishing that they could just “return” their education and get all that money back.

But there is no walking away from student loan debt.

The truth is that federal bankruptcy law makes it nearly impossible to discharge student loan debts.

Basically, once you get into student loan hell there is no escape.

So now we have hundreds of thousands of college graduates that can’t get good jobs and that have brutal student loan payments that they can’t possibly handle.

No wonder so many of them seem so angry and depressed.

But the funny thing is that so many that are still in college are so unbelievably optimistic about the future.

Edwin Koc, director of research for the National Association of Colleges and Employers says that those approaching college graduation are an extremely confident bunch….

“Over 90 percent think they have a perfect résumé. The percentage who think they will have a job in hand three months after graduation is now 57 percent. They’re still supremely confident in themselves.”

So have we done a good job of teaching them to have confidence in themselves or have we done them a disservice by allowing so many of them to live in complete denial?

The truth is that the U.S. economy is in the process of collapsing, and we need to prepare our young people for the tough times that are ahead.  Life is going to require an extreme amount of hard work and discipline in the years ahead, and unfortunately those qualities are not in great supply among young Americans right now.

Actually, the “real world” is not going to be getting easier for any of us.  We are all going to require an attitude adjustment if we are going to successfully navigate the difficult times that are coming.  So let’s not be too hard on new college graduates and other young Americans.  The truth is that the vast majority of us are “soft” at least to some degree because of the decadent society in which we live.  Let’s just hope that somehow we can all find enough inner strength to endure the great challenges that are going to confront us in the years ahead.