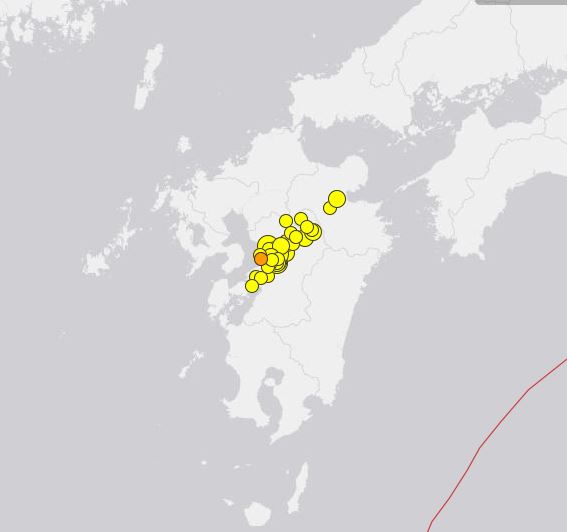 Over the past 48 hours, our planet has been hit by literally dozens of earthquakes of magnitude 4.0 or greater, and scientists are acknowledging that what is taking place is highly unusual.  This strange shaking began toward the end of last week when the globe was struck by five major earthquakes over the space of just two days, and over the weekend the seismic activity just continued to escalate.  Very early on Saturday, Japan’s southern island of Kyushu was hit by a magnitude 7.3 earthquake, and on Saturday night a magnitude 7.8 earthquake struck off Ecuador’s Pacific coast.  It was the worst earthquake that Ecuador had experienced since 1979, and it was followed by at least 163 aftershocks.  Unfortunately, there are indications that what we have seen so far may be just the beginning.

Because the Ecuador earthquake was bigger, it is getting most of the headlines at the moment, but the truth is that what is going on in Japan is potentially far more dangerous.

Over the past week, Japan’s southern Island of Kyushu has been rocked by a series of devastating quakes, including two major ones in less than 48 hours.  The following comes from the Guardian…

A second major earthquake in less than two days has shaken Japan’s southern island of Kyushu, with at least 34 people thought to have been killed, about 1,500 injured and more feared buried after building collapses and landslides.

The 7.3 magnitude earthquake struck at about 1.30am on Saturday, waking people across the island – including the thousands already in crisis centres. It caused widespread damage, with several landslides and a village evacuated over fears a dam might burst.

The mainstream media in the United States is using the term “landslides” to describe what has happened all over Kyushu, but the truth is that in many instances it would be far more accurate to say that “giant cracks” or “vast chasms” have formed.  The geography of Japan’s southern island has been fundamentally transformed, and this is beginning to cause huge concerns.  Here is more from the Guardian…

One major landslide tore open a mountainside in Minamiaso village in Kumamoto prefecture, destroying a key bridge that could cut off food and other relief transport to the worst-hit area.

Another landslide hit a road, collapsing a house that fell down a ravine. In another part of the village, houses were left hanging precariously at the edge of a huge hole.

I want to show you a map which comes directly from the U.S. Geological Survey.  This map shows all of the earthquakes of magnitude 2.5 or greater that have hit Japan’s southern island over the past week.  As you look at this map, do you see a pattern?…

The dozens of earthquakes that have hit Japan’s southern island over the past week appear to form something of a straight line that divides the island in two.  Many are now speculating that geological forces are beginning to tear Kyushu in half, and if that is true, the earthquake activity that we have seen in Japan so far is probably just the tip of the iceberg.

We could potentially be talking about an event that could ultimately have far more of an impact on Japan than the tsunami of 2011.  By the time it is all said and done, entire cities could be wiped off the map and millions upon millions of Japanese citizens could be displaced.

Already, the seismic activity that has rocked Kyushu is having quite an impact on the Japanese economy…

Earlier today Toyota was one of many Japanese companies to announce that it will suspend most car production across Japan as a result of critical supply chain disruptions caused by the recent destructive earthquake and numerous aftershocks. All of the major assembly lines will be shut down across its four directly-run plants, and Toyota will be halting production in stages at other group companies as well.

According to the Nikkei Asian Review, most of the Toyota group in Japan will be effectively shut down through at least the end of this upcoming week, with a production loss of as many as 50,000 vehicles, including brands such as Prius, Lexus, and Land Cruiser.

Our planet resembles something of a giant cracked egg, and the enormous tectonic plates that we are all living on are constantly in motion.  So if Japan’s southern island is in the process of slowly splitting in half, that shouldn’t exactly be a surprise.  After all, scientists assure us that Los Angeles and San Francisco will be directly next to one another someday.

And it isn’t just Japan that we need to be concerned about.  All along the “Ring of Fire”, seismic activity is increasing, and this has many of the experts completely puzzled.  The following comes from an excellent piece by Alvin Conway…

“We have recently experienced a period that has had one of the highest rates of great earthquakes ever recorded,” said lead study author Tom Parsons, a research geophysicist with the U.S. Geological Survey (USGS) in Menlo Park, California.

If you are familiar with my work, then you already know that I believe that we have entered a period of time during which we will see seismic activity on a scale that none of us have ever experienced before.

This great shaking will combine with other factors such as financial collapse, geopolitical instability and civil unrest to produce what many have described as a “perfect storm”.  Life as we know it is in the process of fundamentally changing, and right now we are only in the very early chapters of this change.

Unfortunately, most people are ignoring the warnings and will continue to ignore them until it is far too late.