The mainstream media is heralding today’s “fantastic” employment numbers as evidence that the U.S. economy is steadily recovering.  But is that really true?  The number of jobs created in June was just a little bit more than what is required to keep up with population growth, and the official unemployment rate remained at 7.6 percent.  And if you look deeper in the numbers, they don’t look very good at all.  The percentage of low paying part-time jobs in the economy continues to rise, the number of full-time jobs actually decreased and the U-6 unemployment number jumped from 13.8% in May to 14.3% in June.  That is a stunning increase.  And if the labor participation rate in this country was at the level it was at prior to the last recession, the official unemployment rate would be sitting at 11.1%.  But according to the mainstream media, all of this is wonderful news.  It is like we are in some sort of economic bizarro world where bad is good and down is up.

When the jobs numbers were released on Friday, Business Insider breathlessly declared that it “was jobs day in America, and America crushed expectations.”

But should we really be celebrating?

Posted below is a chart that shows the percentage of working age Americans with a job since the beginning of the year 2000.  This chart does include the jobs numbers that were released on Friday… 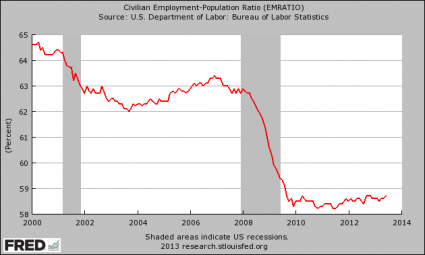 Can you see a “recovery” in there somewhere?

Let me look again.  This time I will squint really hard.

For three and a half years we have been stuck in a range between 58 percent and 59 percent.  We are way, way below where we were before the recession.

So can we please not even begin to use the word “recovery” until we at least get above the 59 percent level?

And most of the jobs that are being created are of very poor quality.  As I mentioned above, the figures show that the number of full-time jobs actually decreased last month.  And as Zero Hedge pointed out, manufacturing employment has actually declined for four months in a row…

Even as the manufacturing jobs continue to collapse, posting their fourth consecutive monthly drop in June to 11.964 million jobs, minimum wage waiters and bartenders have never been happier. In June Restaurant and Bar employees just hit a new all time high of 10,339,800 workers, increasing by a whopping 51,700 in one month.

Things are pretty good in America right now if you want to flip burgers or wait tables.  But if you want a good job that you can support a family with, things are getting even worse.

The yield on 10 year U.S. Treasuries absolutely exploded today.  It opened at 2.50% and closed at 2.71%.  When I saw what had happened I could hardly believe it.

If bond yields continue to climb like this, it is going to cause some massive problems in the financial markets.  The following is from an article by John Rubino…

A few things to look for: recalculations of the deficit in light of spiking interest costs, comparisons of US and Japanese yields and speculation about what this means for Japanese rates — followed by dire analyses of Japan’s future borrowing costs — and last but not least, a growing concern for the hundreds of trillions of dollars of interest rate derivatives that now have one counterparty deeply in the red.

Most Americans don’t think too much about bond yields, but if they keep spiking it is going to dramatically affect every man, woman and child in the entire country.

Yesterday, I described some of the consequences that rapidly rising bond yields would have…

Never before have we had anything like the gigantic derivatives bubble that is hanging over global financial markets like a sword of Damocles.

As interest rates continue to go up, the derivatives bubble could burst at any time.  When it does, we are going to see financial carnage unlike anything we have ever seen before.

2008 was just the warm up act.  What is coming next is going to be the main event.

But in the economic bizarro world that we are living in, the mainstream media insists that skyrocketing interest rates are nothing to worry about.

And Yahoo actually ran a story entitled “Why higher U.S. yields should cheer investors“.  Needless to say, the arguments in that story are not very convincing.

Mutual and exchange-traded bond funds lost a record $79.8 billion in June, according to TrimTabs Investment Research.

The rush for the exits in the bond market is threatening to become an avalanche.

I hope that this is not the beginning of a financial panic.  I hope that we have more time before the next major wave of the economic collapse strikes.

But I certainly cannot guarantee that things will remain stable.  Once fear starts to sweep through financial markets, things can change very, very quickly.