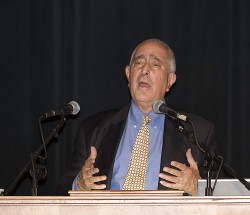 He sure has come a long way since “Ferris Bueller’s Day Off”.  During a recent television segment for CBS, Ben Stein declared that “the tea leaves are ominous” and he warned that an economic collapse may be coming.  In particular, Ben Stein is deeply concerned about inflation.  During his recent appearance on CBS, Stein proclaimed that the Federal Reserve is “just shoving money out the door as fast as it can” and that this could have horrific consequences for the U.S. financial system.  Sadly, Ben Stein is exactly right on this point.  The Federal Reserve has already injected enough money into the financial system to create an inflationary disaster.  Fortunately most of this liquidity is still being held by the banks (this will be further explored below), but once all of that money starts getting released into the financial system it is going to unleash economic chaos.

In the video that you are about to watch, Ben Stein states that “when serious inflation hits, it hits everyone”.

And that is absolutely true.  Inflation is a hidden tax on ever single dollar that each one of us holds.  Nobody can cheat that hidden tax and nobody can escape from it.

You may have noticed that the price of gas is going up.

In fact, just the other day UPI reported that the price of gas at one station in the Washington D.C. area was up to 5 dollars a gallon.

Can it get much worse?

Well, actually yes it can.

Richard Hastings, a strategist at Global Hunter Securities, recently told CNBC that he believes that we could potentially see $6 gas at some point this summer.

Do you think that a lot of American families will rethink their summer vacations if that happens?

Perhaps Americans will just fly instead.

Well, that is rapidly becoming more expensive as well.  Just check out what one recent CNN article had to say about rising airfares….

Late Tuesday, Southwest Airlines raised all of its round-trip fares by $10. Delta (DAL, Fortune 500) initiated this latest round of price increases on Monday, and as of midday Wednesday American Airlines (AMR, Fortune 500), JetBlue (JBLU) and United Airlines (UAL) had matched it.

As Ben Stein also notes in the video below, food prices are soaring as well.  Rampant money printing by the Federal Reserve and serious crop problems all over the globe have created a “perfect storm” for agricultural commodities.  In the video, Stein sounds downright apocalyptic as he describes crop failures around the world….

But now, we are getting serious crop shortfalls in China – an enormously important agricultural producer and consumer. U.S. crop forecasts are also disappointing. There are huge problems in Australia, South America, and Russia. Corn, wheat, rice and other foodstuff prices are just going wild.

In a recent article about the global food crisis, I detailed some of the agricultural commodity price increases that we have seen….

*According to the World Bank, the global price of food has risen 36% over the past 12 months.

*The commodity price of wheat has approximately doubled since last summer.

*The commodity price of corn has also about doubled since last summer.

*The commodity price of soybeans is up about 50% since last June.

But it isn’t just food and gas that are going up.  We are seeing inflation everywhere.  The value of virtually all “hard assets” is going up.

Investors are running to precious metals such as gold and silver in a desperate attempt to preserve their wealth.  Gold and silver have been absolutely skyrocketing.  The price of gold set another brand new all-time record high this week.  The price of silver hit a 31-year high today.

One of the biggest reasons for all of this is that the Federal Reserve has been flooding the system with new money.  In the video below, Ben Stein points to quantitative easing as the primary reason why we are seeing so much inflation….

But most important of all, the Fed is just shoving money out the door as fast as it can, creating piles of cash in banks.

The Federal Reserve had hoped that economic growth would be sparked by all of this new cash, but that is only happening to a minimal degree.

Instead, what Ben Stein believes all of this new money is going to bring about is a situation known as “stagflation”.

Well, we seem to be headed for a repeat of those days.

In a previous article, I defined stagflation….

Stagflation exists when inflation and unemployment are both at high levels at the same time.

Up to this point, we have had high unemployment but relatively low levels of inflation.

But now we are going to get to enjoy high unemployment and high inflation at the same time.

Video of Ben Stein’s recent appearance on CBS is posted below.  You can read a transcript of his remarks here.  It is amazing that a mainstream news outlet would allow this much truth to get out….

Look, the reality is that you cannot pump this much money into the financial system without there eventually being very serious consequences.

For decades the Federal Reserve has been systematically debasing the U.S. dollar, but what the Fed has been doing to the money supply over the past couple of years is absolutely unprecedented.  Just check out the chart below…. 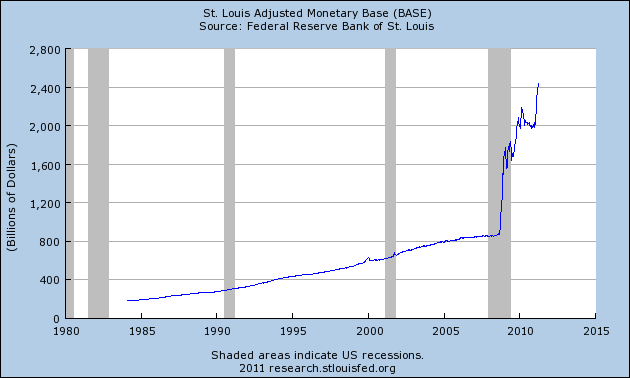 So why hasn’t all of this new cash caused chaos in the economy already?

Well, because most of it is still trapped in the financial system.  Banks have been reluctant to loan it out.  Instead, they seem content to keep most of it on reserve at the Fed.

But if all of this new money starts leaking out into the economy it is going to drive prices up.  When you have lots more money chasing roughly the same number of goods and services it is inevitable that inflation will result.

Robert Wenzel of EconomicPolicyJournal.com believes that more quantitative easing is not even necessary to turn the U.S. economy into a hyperinflationary nightmare.  In fact, Wenzel says that there are enough excess reserves at the Fed right now to turn us into another Zimbabwe….

With over $1.4 TRILLION in excess reserves, Bernanke never has to resort to QE style monetary operations ever again, to print money. If those excess reserves leak into the system, Bernanke has enough sitting there to make Zimbabwe look like a model of prudent money management. As per usual, Bernanke has most of the media and Fed watchers looking at the wrong card.

Forget about QE3, keep your eye on excess reserves. Excess reserves are funds that are not in the system bidding up prices, but when they enter the system by banks using them to make loans, have the potential to result in a multiple of their size, when they impact the money supply. Because of this potential for multiple size impact, excess reserve entering the economy are considered high-powered money.

We would have never even been in this position if we had never allowed the Federal Reserve to be created and had never gotten 14 trillion dollars in debt.  But now America has a debt problem that can never be solved under the current system.  We are locked into a debt spiral from which there is no escape.

Last year, the U.S. government spent more on interest on the national debt than on the following departments combined….

*The Department of Health and Human Services

*The Department of Energy

*The Department of Veterans Affairs

*The Department of Justice

*The Department of Homeland Security

*The Department of Agriculture

*The Department of Labor

But right now the U.S. is still able to borrow tons of money at super low interest rates.

So what happens if interest rates go up?

It could potentially be catastrophic.

That is why the decision by S&P to downgrade its outlook on U.S. government debt was such a big thing the other day.  The U.S. still has a “AAA” rating, but S&P is warning that the AAA rating is in danger.

So what would it mean if the U.S. lost the AAA rating that it currently holds?

A credit rating downgrade for the United States would spell even more financial trouble for the U.S. government, hampering its ability to borrow money as investors demand higher yields to make up for the increased risk. That would cause its national debt to balloon further and increase the need to hike taxes or make even more painful cuts in spending.

But the U.S. government continues to borrow money like there is no tomorrow and Ben Bernanke and his friends at the Fed continue to recklessly print money.

As bad as things may seem for many of you right now, the truth is that what we are experiencing at the moment is a “false bubble of prosperity”.  Things are eventually going to get much, much worse.

Enjoy this time of economic peace and stability while you still can.  Our leaders have absolutely destroyed our economic future and we are going to want to have some good memories to hold on to while we are living through economic hell in the years ahead.