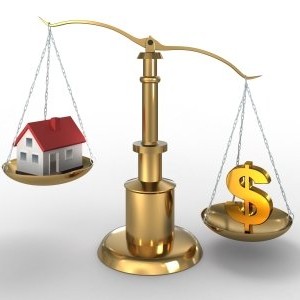 In 2010, record numbers of Americans are defaulting on their mortgages.  For most of them, it is because they simply cannot afford the mortgage payments any longer.  But for a growing number of Americans, the decision to stop paying on a mortgage is not because of financial hardship.  Rather, after taking a hard look at the numbers, many Americans are simply deciding to walk away rather than continuing to make monthly payments on a home that has dramatically declined in value.  It is called a “strategic default”, and it is a phenomenon that is sweeping the nation.  So why have strategic defaults increased so dramatically?  Well, in some areas of the United States, homes are only worth about half of what they were going for at the height of the market.  So what is the morally right thing to do in that situation?  Should someone “honor the contract” that they signed and continue making payments no matter how hard it hurts, or is the morally right thing to stop making payments on the mortgage in order to put your family in a better financial position?

The truth is that the answers to these questions are not easy.

In the past year it is estimated that at least a million Americans who can afford to stay in their homes simply walked away.

Take a moment and think about that.

A million Americans that have simply walked away from their homes.

This is something that is absolutely unprecedented in American history.

In fact, 31 percent of all foreclosures in March were deemed to be “strategic defaults” by researchers at the University of Chicago and Northwestern University.  That is up from just 22 percent in March 2009.

So the strategic default trend is accelerating.

And with more than 24% of all homes with mortgages in the United States underwater as of the end of 2009, it is likely that we are going to see a whole lot more strategic defaults.

That is a whole lot of families that have some very hard decisions to make.

But it just isn’t families that are making these kinds of decisions.  Even the biggest financial institutions in the United States have committed strategic defaults.  For example, Morgan Stanley walked away from five San Francisco office buildings they bought at the height of the real estate boom.

But is it the right thing to do?

Well, let’s look at both sides of the issue.

Why many would say that strategic defaults are morally acceptable….

Many Americans have no problem at all walking away from their mortgages.  After all, they would argue, they never agreed to pay twice what a house is worth.

If they signed up for a $400,000 mortgage, they would argue that they expect to be making payments on a house that is worth somewhere around $400,000.

So is that unreasonable?

After all, if a $400,000 house goes down to $200,000, there are many that would argue that it represents an unforeseen circumstance that negates the deal.

Others would argue that bankers tricked millions of Americans into accepting mortgages that they could not possibly afford, and therefore nobody should be crying for the bankers when people quit paying on those mortgages.

In essence, the argument is that the bankers created this mess so the bankers should be the ones to pay the penalty.

Still other Americans are choosing strategic defaults because it enables them to provide for their families during these hard economic times.

For many Americans, often the choice is between paying the mortgage and putting food on the table.

And because of the massive delays in processing foreclosures these days, many people are finding that they can live in their homes “rent free” for months on end after they stop making payments.

In fact, Bank of America’s credit loss mitigation executive, Jack Schakett, has even acknowledged that many home owners have a huge financial incentive to walk away: “there is a huge incentive for customers to walk away because getting free rent and waiting out foreclosure can be very appealing to customers.”

So how much “free rent” are those who have walked away from their mortgages getting?

According to LPS Applied Analytics, the average home owner in foreclosure has been delinquent for 438 days before actually being evicted.  That is up from 251 days in January 2008.

The truth is that especially in states where the foreclosure process must go through the courts, the systems are simply being overloaded.

For example, in Pinellas and Pasco counties, which include St. Petersburg, Florida and the suburbs to the north, there are 34,000 open foreclosure cases.  Ten years ago, there were only about 4,000.

But there are others that would argue that strategic defaults are 100 percent morally wrong.

Why many would say that strategic defaults are morally wrong….

Those who would say that strategic defaults are wrong would argue that no one put a gun to the head of anyone signing up for a mortgage.

They would argue that “a contract is a contract” and that Americans should fulfill their obligations, no matter how hard it hurts.

The truth is that once upon a time in America, a “strategic default” would have been unimaginable to most people.

Back then, a man was only as good as his word.

Even today, to purposely break a contact is on the same level as purposely telling a lie to many people.

Not only that, but the reality is that a strategic default will ruin your credit for years to come.  Many would argue that it is immoral to ruin your family credit for the simple convenience of getting out of a bad mortgage.

In addition, many would argue that it is wrong to take advantage of the banks by exploiting the delay in foreclosure processing – no matter how evil the banks have been.

After all, do two wrongs make a right?

Plus, in some states there may be additional financial penalties even after you walk away.

Kyle Lundstedt, the managing director of Lender Processing Service’s analytics group says that those who do willingly walk away from their homes are playing a very dangerous financial game….

“These people are playing a dangerous game. There are processes in many states to go after folks who have substantial assets postforeclosure.”

Plus, those who do commit strategic defaults raise borrowing costs on the rest of us.  In the future, banks are going to have to charge all of us higher interest rates on our mortgages in order to factor in the risk that many Americans will simply walk away from their mortgages if their house values go down.

So is it right for everyone else to suffer in the future so that some can get out of bad mortgages right now?

The truth is that it is not the purpose of this article to answer these questions.

The purpose of this article is simply to raise these questions.

We live in unprecedented economic times, and we are all going to be faced with very hard decisions as we move into a very uncertain future.

So what do you think about strategic defaults?

Is it morally right to decide to simply stop paying your mortgage?