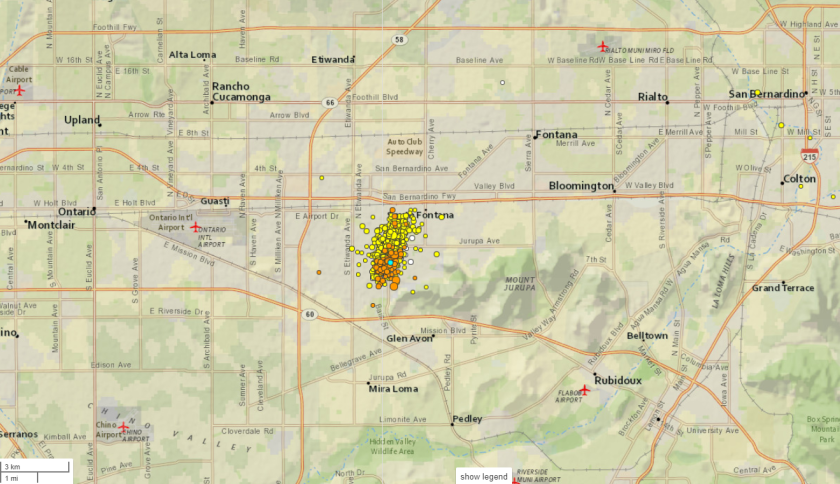 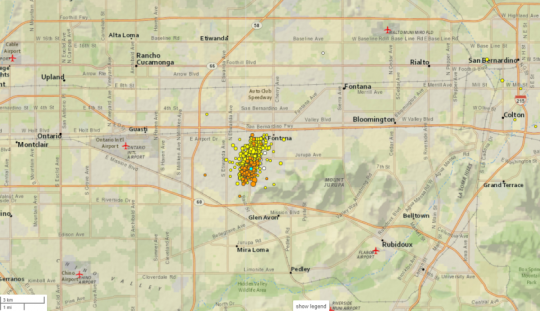 Scientists are quite “concerned” about the huge earthquake swarm that has been shaking southern California in recent weeks, and right at this moment bubbling tar is literally coming up through the streets in one section of Los Angeles.  None of this means that a major seismic event is imminent, but it is certainly not a good sign either.  We have been tracking quite a bit of unusual shaking along the Ring of Fire in recent months, and scientists assure us that it is just a matter of time before “the Big One” hits southern California.  And if you follow my work on a regular basis, then you already know that I am extremely concerned about the potential for major seismic activity along the west coast.  So when I came across a San Diego Union-Tribune article entitled “Southern California earthquake swarm takes an unexpected turn, and that’s reason to worry”, it definitely got my attention.  According to that article, there have been “more than 700 earthquakes” in the Fontana seismic zone over the past few weeks…

There have been more than 700 earthquakes recorded in the Fontana area since May 25, ranging from magnitude 0.7 to magnitude 3.2, recorded Wednesday at 5:20 p.m., according to Caltech staff seismologist Jen Andrews.

That is certainly a lot of earthquakes, but is this sort of activity unusual?

Well, according to one scientist, this is the “most prolific swarm” to hit that area “in the past three decades”…

The likelihood of a larger seismic event, given so many quakes over such an extended period, is higher than normal, the scientist said.

“People ought to be concerned,” said Hauksson. “This is probably the most prolific swarm in that area of the Fontana seismic zone that we’ve seen in the past three decades.”

Once again, I want to stress that all of this activity does not mean that a major earthquake is about to happen.

But one day it is coming.  In fact, scientists have told us that one day the entire San Andreas fault could “could unzip all at once”.  And when that day finally arrives, there might not be any warning at all.

If you live in California, you should be prepared for earthquakes to occur at all times, and that means taking some reasonable precautions…

Hopefully there will not be a major quake any time soon, but over the past few days another ominous sign has made news.

According to one local news report, “bubbling tar” is actually coming up through the streets near the La Brea Tar Pits in Los Angeles…

And on Saturday, more seepage. Enough to draw the interests of tourists and residents alike.

CBS2’s Jake Reiner said tourists and residents alike have been coming to the area marveling at the bubbling tar.

But one local resident admitted that he had “never seen this before”, and apparently there is a very strong odor coming out of the ground…

“You see a little bit of tar oozing up between the pavement,” Kogan says, “all over the neighborhood. That’s not unusual but this seems to be flow tar. I’ve never seen this before.”

Not to mention the constant hissing sound coming from the ground — it’s methane.

“I can smell it. I thought a car broke its oil pan out here,” says Patrick Myer.

I don’t know about you, but if you can literally hear methane coming out of the ground and bubbling tar is starting to come up through the streets, perhaps that is a sign that it is time to consider moving somewhere else.

But of course the truth is that our entire planet is becoming increasingly unstable.  On Monday, a magnitude 4.0 earthquake struck near Cleveland.  The following comes from CNN…

A preliminary magnitude-4.0 earthquake was reported Monday about 20 miles northeast of Cleveland, in or around Lake Erie, the US Geological Survey said.

The earthquake, measuring 3.1 miles in depth, was reported just before 11 a.m. local time north-northwest of the city of Eastlake.

“Did you feel that rumble this morning Cleveland? Well if you missed it, we caught this morning’s earthquake on multiple #OHGO cameras. Check it out! #Clevelandreallyrocks,” the Ohio Department of Transportation tweeted, along with a collection of traffic videos showing the moment the quake hit.

And of course Cleveland is not very far from the New Madrid fault zone that I have been writing articles about again and again.

On the other side of the world, a huge volcano in Indonesia also erupted on Monday…

A huge column of ash was blasted almost five miles into the sky above the Indonesian island of Sumatra after an active volcano erupted.

Major seismic events are happening so frequently now that it is really hard to keep up with them all.

But it is very important not to become numb to what is happening.  Something strange really is happening to our planet, and many believe that it is going to get a lot worse.

As for California, scientists keep telling us that “the Big One” is way overdue, and when it finally arrives it could be a history altering event.

According to one team of scientists, an extremely large earthquake could potentially “plunge large parts of California into the sea almost instantly”.  Such an event would be far worse than anything that any Hollywood earthquake movie ever envisioned, and let us pray that nothing like that happens any time soon.