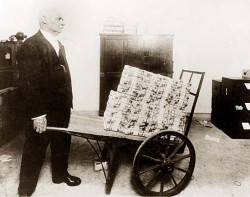 The financial chess game in Europe is still being played out, but in the end it is going to boil down to one very fundamental decision.  Is Germany going to allow the ECB to print up trillions of euros and use those euros to buy up the sovereign debt of troubled eurozone members such as Spain and Italy or not?  Nothing short of this is going to solve the problems in Europe.  You can forget the ESM and the EFSF.  Anyone that thinks they are going to solve the problems in Europe is someone that would also take a water pistol to fight a raging wildfire.  No, the only thing that is going to keep Spain and Italy from collapsing under the weight of a mountain of debt is a financial nuke.  The ECB needs to have the power to print up trillions of euros and use that money to buy up massive amounts of sovereign debt in order to guarantee that Spain and Italy will be able to borrow lots more money at very low interest rates.  In fact, this is probably what European Central Bank President Mario Draghi has in mind when he says that he is going to “do whatever it takes to preserve the euro”.  However, there is one giant problem.  The ECB is not going to be able to do this unless Germany allows them to.  And after enduring the horror of hyperinflation under the Weimar Republic, Germany is not too keen on introducing trillions upon trillions of new euros into the European economy.  If Germany allows the ECB to go down this path, Germany will end up experiencing tremendous inflation and the only benefit for Germany will be that the eurozone was kept together.  That doesn’t sound like a very good deal for Germany.

Those are unsustainable levels.

The only thing that is going to bring those bond yields down permanently to where they need to be is unlimited ECB intervention.

But that is not going to happen without German permission.

Meanwhile, the situation in Spain gets worse by the day.

An article in Der Spiegel recently described the slow motion bank run that is systematically ripping the Spanish banking system to shreds….

Capital outflows from Spain more than quadrupled in May to €41.3 billion ($50.7 billion) compared with May 2011, according to figures released on Tuesday by the Spanish central bank.

In the first five months of 2012, a total of €163 billion left the country, the figures indicate. During the same period a year earlier, Spain recorded a net inflow of €14.6 billion.

If those numbers sound really bad to you, that is because they are really bad.

At this point, authorities in Spain are starting to panic.  According to Graham Summers, Spain has imposed the following new capital restrictions during the last month alone….

How would you feel if the U.S. government permanently banned all cash transactions greater than $2,500?

That is how crazy things have already become in Spain.

We should see the government of Spain formally ask for a bailout pretty soon here.

But right now there is not enough money to completely bail either one of them out.

In the end, either the ECB is going to do it or it is not going to get done.

A moment of truth is rapidly approaching for Europe, and nobody is quite sure what is going to happen next.  According to the Wall Street Journal, the central banks of the world are on “red alert” at this point….

Ben Bernanke and Mario Draghi, with words but not yet actions, demonstrated this week that they are on red alert about the global economy.

Expectations are now high that Mr. Bernanke’s Federal Reserve and Mr. Draghi’s European Central Bank will act soon to address those worries. But both face immense tactical and political challenges and neither has a handbook to follow.

So what happens if Germany does not allow the ECB to print up trillions of new euros?

Financial journalist Ambrose Evans-Pritchard recently described what is at stake in all of this….

Failure to halt a full-blown debt debacle in Spain and Italy at this delicate juncture – with China, India and Brazil by now in the grip of a broken credit cycle and the US on the cusp of fresh recession even before the “fiscal cliff” hits – would tip the entire global system into a downward spin, triggering the sort of feedback loop that caused such havoc in late 2008.

As I have written about so frequently, time is running out for the global financial system.

Even Germany is starting to feel the pain.  This week we learned that unemployment in Germany has risen for four months in a row.

There is actually a key date that is coming up in September.  The Federal Constitutional Court in Germany will rule on the legality of German participation in the European Stability Mechanism on September 12th.

If it is ruled that Germany cannot participate in the European Stability Mechanism then that is going to create all sorts of chaos.  At that point all future European bailouts would be called into question and many would start counting down the days to the break up of the entire eurozone.

If Germany did end up leaving the eurozone, the transition would not be as difficult as many may think.

For example, most Americans may not realize this but Deutsche Marks are currently accepted at many retail stores throughout Germany.  The following comes from a recent Wall Street Journal article….

Shopping for pain reliever here on a recent sunny morning, Ulrike Berger giddily counted her coins and approached the pharmacy counter. She had just enough to make the purchase: 31.09 deutsche marks.

“They just feel nice to hold again,” the 55-year-old preschool teacher marveled, cupping the grubby coins fished from the crevices of her castaway living room sofa. “And they’re still worth something.”

Behind the counter of Rolf-Dieter Schaetzle’s pharmacy in this southern German village lay a tray full of deutsche mark notes and coins—a month’s worth of sales.

I have a feeling that it would be much easier for Germany to leave the euro than it would be for most other eurozone members to.

The months ahead are certainly going to be very interesting, that is for sure.

Europe is heading for a date with destiny, and what transpires in Europe is going to shake the rest of the globe.

Sadly, most Americans still aren’t too concerned with what is going on in Europe right now.

Well, if you still don’t think that the problems in Europe are going to affect the United States, just check this news item from the Guardian….

Profits at General Motors are down 41 percent and Europe is being blamed.

The global economy is more tightly integrated than ever before, and there is no way that the financial system of Europe collapses without it taking down the United States as well.

And considering the fact that the U.S. economy has already been steadily collapsing, the last thing we need is for Europe to come along and take our legs out from underneath us.

So what do all of you think about the problems in Europe?

Do you see any possible solution? 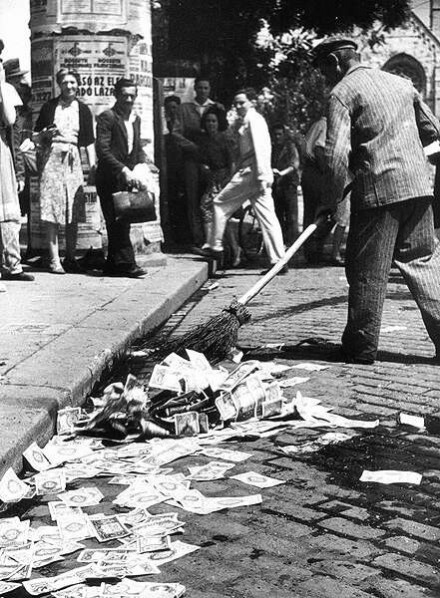