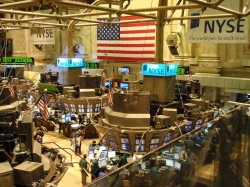 How far does the stock market have to go down before we officially call it a crash?  The Dow is now down more than 2,000 points in just the last 14 trading days.  So can we now call this “The Stock Market Crash of 2011”?  Today the Dow was down 519 points.  Yesterday, an announcement by the Federal Reserve indicating that the Fed would keep interest rates near zero until mid-2013 helped the Dow surge more than 400 points, but all of those gains were wiped out today.  It turns out that the Federal Reserve was only able to stabilize the financial markets for a single day.  Fears about the European sovereign debt crisis and the crumbling U.S. economy continue to dominate the marketplace.  With each passing day, things are looking more and more like 2008 all over again.  So what is going to happen if “The Stock Market Crash of 2011” pushes the U.S. economy into “The Recession of 2012”?

Bank of America stock is down almost 50 percent so far this year.  Overall, the S&P financial sector is down more than 23 percent in 2011 so far.

How soon will it be before we start hearing of the need for more bailouts?  After all, the “too big to fail” banks are even bigger now than they were in 2008.

All of this panic is causing the price of gold to reach unprecedented heights.  Today, gold was over $1800 at one point.  If the current panic continues for an extended period of time, there is no telling how high the price of gold may go.

In the United States, much of the focus has been on the fact that the U.S. government has lost its AAA credit rating, but the truth is that the European sovereign debt crisis is probably the biggest cause of the instability in world financial markets right now.

The European Central Bank has decided to start purchasing Italian and Spanish debt, and there have been rumors that French debt could be hit with a downgrade.  Europe is a total financial basket case right now and unless dramatic action is taken things are going to get progressively worse.

Of course the U.S. is also certainly contributing greatly to this crisis.  The federal government is on track to have a budget deficit that is over a trillion dollars for the third year in a row.  The U.S national debt is a horrific nightmare, but our politicians keep putting off budget cuts.

The debt ceiling deal that was just reached basically does next to nothing to cut the budget before the next election.  Unless the “Super Congress” does something dramatic, the only “budget cuts” we will see before the 2012 election will be 25 billion dollars in “savings” from spending increases that will be cancelled.

The modest spending cuts scheduled to go into effect beginning in 2013 will probably never materialize.  Whenever the time comes to actually significantly cut the budget, our politicians always want to put it off for another time.

But in the end, debt is always going to have its day.  Our politicians can try to kick the can down the road all they want, but eventually a day of reckoning is going to come.

In fact, if the U.S. and Europe had not piled up so much debt, we would not be facing all of the problems we are dealing with now.

Things could have been so much different.

The truth is that this debt crisis is just beginning.  There is no magic potion that is going to make all of this debt suddenly disappear.

Most Americans have no idea how much financial pain is coming.  We have been living way beyond our means for decades, and now we are going to start paying for it.

Now that long-term U.S. government debt has been downgraded, huge numbers of other securities are also going to be affected.  In fact, according to a recent Bloomberg article, S&P has already been very busy slashing the ratings on hordes of municipal bonds….

Standard & Poor’s lowered the AAA ratings of thousands of municipal bonds tied to the federal government, including housing securities and debt backed by leases, following its Aug. 5 downgrade of the U.S.

That is the thing about financial markets – once the dominoes start to fall, the ripple effects can be felt for a long, long time.

So if this stock market crash gets even worse, will the Federal Reserve respond with even stronger measures?

They have already basically promised to keep interest rates near zero for the next two years.  So what else can the Fed do?

Well, many now believe that there is a very good chance that we could see another round of quantitative easing.

Not that more quantitative easing is going to help much of anything.  Rather than helping the economy, the last round of quantitative easing just pushed commodity prices through the roof.  But the Fed is unlikely to just sit there and do nothing while financial markets struggle.

But it is not just the financial markets that are having a difficult time right now.  Bad news is coming in from all over the economy.  The possibility that we could soon slip into another major recession is growing by the day.

Unfortunately, our economy is so weak already that a new recession would probably hurt even more than the last recession did.

Mark Zandi, the chief economist at Moody’s Analytics, says that if we have another recession it “won’t feel like a new recession. It would likely feel like a depression.”

But the American people are in no mood for more economic pain.  Every recent poll shows that Americans are already fed up.

For example, a brand new Reuters/Ipsos poll found that 73 percent of the American people believe that the country is “on the wrong track”.

So let’s certainly hope that the current stock market crash does not set off another major global recession.  We certainly do not need things to get significantly worse than they are right now.

But whether it hits now or later, the truth is that a whole lot of economic pain is on the way.  The U.S. and Europe have been making really, really bad decisions for decades, and we are not going to be able to escape the consequences of those decisions.

The global financial system is one huge mountain of leverage, risk and debt.  A collapse is inevitable.

When you build a house of cards on a foundation of sand, you should not be surprised when it comes crashing down.

The next wave of the economic collapse is coming, and those that are wise will get prepared.