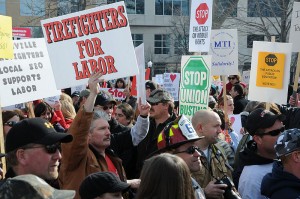 Did you see the huge crowds of protesters that flooded the Michigan Capitol on Tuesday?  They were there to protest two bills there were being considered by the state legislature that would limit the power of unions in the state.  Michigan lawmakers approved the bills and this absolutely infuriated the protesters.  There is a lot of passion on both sides of this debate, but I am afraid that both sides in this debate are missing the bigger picture.  If we keep shipping millions of our jobs to China, there isn’t going to be work for anyone no matter how much power unions have or don’t have.  During the month of October, the U.S. trade deficit increased to 42.2 billion dollars.  Our trade with China accounted for most of that deficit.  Our trade deficit with China in October increased to a new all-time one month record of 29.5 billion dollars.  Nearly 30 billion dollars that could have gone to U.S. businesses and U.S. workers went to China instead.  Since 1975, a total of about 8 trillion dollars that could have gone to U.S. businesses and U.S. workers went to the rest of the world instead.  Shiny new factories are going up all over China, and meanwhile our once great manufacturing cities are degenerating into desolate wastelands.  So what is going to happen when all of the good paying manufacturing jobs are gone?  Are we all going to fight bitterly over whether we should unionize the low paying jobs that remain at places such as Wal-Mart and McDonalds?  Such an approach is not going to bring back prosperity to America.  We desperately need to start building things and start creating real wealth inside this country once again.  We desperately need to stop sending tens of thousands of businesses, millions of jobs and trillions of dollars of our national wealth out of the country.  Unfortunately, I don’t see anyone out there holding protests about our trade deficit.  Nobody really seems to care, so our economy will continue to bleed good jobs and the middle class will continue to be destroyed.

The funny thing is that the workers that are out there protesting these union bills actually voted for the politicians that are killing their jobs.  Both parties are married to the one world economic system and the “free trade” agenda, and Barack Obama has been one of the worst offenders.  He has been pushing for more “free trade agreements” throughout the past four years, and yet union workers continue to support him enthusiastically.

How foolish can they possibly be?

Yeah, let’s merge American workers into a global labor pool with workers in third world countries on the other side of the globe that work in absolutely nightmarish conditions for as little as 45 dollars a month.  That sounds like a great idea, doesn’t it?

Oh, but you don’t want to work for 45 dollars a month?

You don’t even want to work for 450 dollars a month?

Well, then the big corporations that fund politicians like Obama will just take your jobs and send them halfway around the planet.

Do you think that your unions will save your jobs?

Michigan already has the highest rate of union membership in the Midwest.

It also has the highest rate of unemployment in the Midwest.

Over the past couple of decades, thousands of businesses in Michigan have either closed down or moved facilities overseas.

Did the unions prevent any of that?

If union bosses really wanted to do some good, they would be organizing protests against our incredibly foolish trade policies.

But instead, they tell their members to vote for politicians like Obama and then they run out to the stores and fill their carts with huge piles of products that were made in China.

Union workers need to wake up to one fundamental economic fact – in a one world economic system, the big corporations simply do not need you.  They can make their products in lots of other countries where it is legal to pay slave labor wages.

But instead of getting upset about what is really killing their jobs, union workers in Michigan are screaming mad about a couple of new laws that will take some power away from the unions.

That is kind of like being obsessed with a broken fingernail when your leg has just been sawed off and you are gushing blood all over the floor.

Oh, but union workers did put on a good show up in Michigan.  The following is how a Bloomberg article described the protests…

The crowd numbered more than 10,000, according to State Police Inspector Gene Adamczyk, with more buses still arriving. The Capitol was closed when it reached its capacity of 2,000.

The anger surrounding these protests was almost palpable.  One state representative even declared that “there will be blood”.

Merging our economy with the economy of communist China was one of the stupidest economic moves that we could have ever made.  They are systematically taking our wealth, and then we have to go over there and beg them to lend money back to us.

Pretty soon the Chinese economy will dwarf ours.  According to the National Intelligence Council, the GDP of Asia will have surpassed the GDP of North America and the GDP of all of Europe combined by 2030.

But if we had never opened up trade with communist China none of this would have ever happened.

Why won’t American workers get upset about this stuff?

Do you really want your standard of living to decline to the level of a Chinese factory worker?

You can see some photos of what life is like for workers in China’s toy factories right here.  This is what the future holds for American workers unless something is done.

For much more on how our trade policies are absolutely gutting our economy, please see the statistics in this article: “55 Reasons Why You Should Buy Products That Are Made In America This Holiday Season“.

But no, the big unions will never dare oppose Obama.  They love him far too much to do that.

Meanwhile, we continue to bleed good jobs.  Large companies have announced the elimination of more than 100,000 jobs since November 6th, and it looks like 2013 is going to be a very difficult year for American workers.

If you are an American worker, you need to ask yourself why anyone would want to hire you in this kind of economic environment.  You are 10 to 20 times more expensive than workers on the other side of the globe.  In addition, our politicians just keep piling more rules, regulations and taxes on to the backs of the employers in this country.  It is more difficult than ever to make a profit from the labor of an American worker.

Honestly, I understand why most small businesses don’t want to hire anyone in this economic environment.  It just doesn’t make sense.  For much more on this, please see this excellent article by Charles Hugh-Smith.

And there are signs that things are going to get even worse.  For example, the NFIB Small Business Outlook survey dropped like a rock during November.  That is a very bad sign for hiring.

The United States will always need to trade with other nations, but we need to do it in a way that is balanced and that protects American workers.  Right now there is a one way conveyor belt taking businesses, jobs and money out of this country.  If we don’t do something about our mammoth trade deficit, we will have no chance of reversing the steady decline of the U.S. economy.

Hopefully we can get the American people to wake up and realize this.  Instead, most of the comments at the end of this article will probably be about the pros and cons of unions.  That will be yet another sign that most people still don’t get these issues. 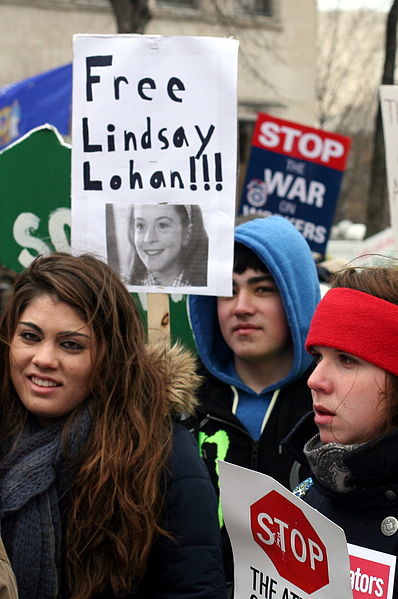