2011 sure has been a wild year for America so far.  First we had unprecedented tornado outbreaks, then we had horrific flooding along the Mississippi and Missouri rivers, then we had record setting wildfires and now we are facing a crippling drought all over the southern United States.  From Arizona all the way to Georgia there are vast areas that have been declared to be experiencing “exceptional drought” by the National Weather Service.  Crop failures are widespread and ranchers are having a very difficult time trying to feed their cattle.  If the southern United States does not receive a significant amount of rain soon, the drought of 2011 is going to be one of biggest natural disasters that we have seen in a long, long time.

Right now, approximately 29 percent of the country is experiencing some level of drought.  About 12 percent of the U.S. is experiencing “exceptional drought”, which is the highest level of drought.  The combination of very little rain and scorching heat over much of the nation has been absolutely devastating.  Many areas have been dealing with high temperatures in the 90s and the low triple digits for weeks.

Between October and June, the state of Texas experienced one of the driest stretches ever recorded.  Already, the drought of 2011 is considered to be the third-worst drought ever experienced in Texas.

The U.S. Department of Agriculture has already designated all 254 counties in the state of Texas as natural disaster areas.  The farmers and ranchers down there are going through hell right now.

But Texas is not alone.  Most of Arizona, all of New Mexico, all of Oklahoma, most of Arkansas, all of Louisiana, most of Mississippi, most of Alabama, most of Georgia, most of Florida, most of South Carolina and most of North Carolina are also dealing with drought conditions.

This drought is hitting many of our most significant agricultural areas.  If we don’t get a significant amount of rain in some of these areas soon the losses are going to be catastrophic.

At this point, Oklahoma has just had 28 percent of the rainfall that it normally gets during the summer.  Many other areas are experiencing similar problems.

Needless to say, the drought of 2011 is absolutely devastating a lot of hard working farmers and ranchers.

A recent article posted on CNBC described some of the effects that this drought is having on farmers….

“The heat and the drought are so bad in this southwest corner of Georgia that hogs can barely eat. Corn, a lucrative crop with a notorious thirst, is burning up in fields. Cotton plants are too weak to punch through soil so dry it might as well be pavement.”

So what is going to happen if this drought continues for the rest of the summer?

Ranchers are also having a very hard time right now.  All over Texas, as pastures die off ranchers are selling their herds because soon they will not be able to feed them any longer.

Right now cattle are being slaughtered in record numbers due to the drought.  But after all of these cattle are gone will we be facing a cattle shortage?

Thanks to the recent wildfires and the tremendous drought, it is getting very difficult for ranchers to feed their cattle.  Just check out the following statistics from a recent article in the Christian Science Monitor….

Most Texas pasture and range lands – 86 percent – are currently “poor” or “very poor,” according to the US Department of Agriculture’s National Agricultural Statistics Service. The same rating applied to 69 percent of Oklahoma and 40 percent of Kansas.

But it is not just cattle that are being devastated by this drought.  Just check out what this drought is doing to deer….

Pregnant does are having problems carrying fawns to term, and most of them born prematurely aren’t surviving, according to the Texas AgriLife Extension Service. Other does are abandoning their newborns because drought-induced malnutrition has robbed them of their ability to produce milk.

This drought has also had some other dramatic effects.

For example, a gigantic “wall of dust” recently rolled through Phoenix, Arizona.  Take a moment and watch the video posted below.  Does this remind anyone else of the “Dust Bowl” of the 1930s?….

In economic terms, the drought of 2011 could end up having a huge impact on average American families.

Ultimately, American consumers are likely going to feel some significant pain from this crisis as a recent CNBC article noted….

That means grocery shoppers will feel the effects of the drought at the dinner table, where the cost of staples like meat and bread will most likely rise, said Michael J. Roberts, an associate professor of agricultural and resource economics at North Carolina State University in Raleigh, N.C. “The biggest losers are consumers,” he said.

All of this wouldn’t be so alarming if we were not already on the verge of a global food crisis.  Global food prices continue to hover around record highs.  Somalia, Ethiopia and Kenya are experiencing the worst drought conditions that they have seen in 60 years.  Tonight there are 10 million people living in the Horn of Africa that are facing severe food shortages.  Hunger and starvation are spreading again in east Africa and in many other areas of the world as well.

That is one reason why so many Americans are working so hard to prepare for disaster right now.  All over the United States (and around the world), “preppers” are storing up food and supplies in case things go really bad.

Some Americans are taking things to extreme levels.  For example, a man named Steven Huff is constructing a 72,000 square foot “home” (some call it a fortress) in Missouri.  Huff is the chairman of Wisconsin-based TF Concrete Forming Systems.  Apparently the goal is to show off what his firm is capable of.  It is claimed that this will be “a home that uses very low energy, as well as having strong resistance to tornadoes, hurricanes, earthquakes, fire, flood and insect damage”.

It kind of looks like a castle to me.  You can see a picture of this remarkable “home” right here.

Unfortunately, most of us cannot afford to build 72,000 square foot fortresses.  So we will just have to do the best that we can with what we already have.

The world is becoming more unstable every single day.  Global financial markets are getting extremely nervous and jumpy.  More chaos or more war could erupt in the Middle East at any time.  Natural disasters continue to get more frequent and more intense.  We certainly do live in interesting times.

It is imperative that we all watch carefully as these global events unfold.  None of us knows for sure what is going to happen next.  But those that are prepared are going to have the best chance to make it through when disaster does strike. 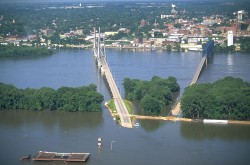